This week’s Falling Skies dropped us ‘in media res’ – in the middle of the action – before flashing back 60 hours earlier to find out how this whole fiasco began. Between escape plans, new alliances forming and reunions, this episode was jammed packed with important stuff. On the other hand, there were various moments that not only spell trouble for the future; but also call into questions a few continuity errors. The episode was fairly straightforward so as usual, I won’t waste too much time summarizing the plot.

So despite evolution being schedule to happen in the next 48 hours from last episode, apparently more than 60 hours passed and nothing has happened. Though in that interim, Tom has finalized his plan to get everyone out of the camp. After attacking the Overlord and leading almost all the skitters into a trap while Pope stepped up to climb the fence and sever the tether, the camp is now free.

Although – as I will explain later – not all is as it appears. We know that the evolution would take place whether the humans submitted or not; and the Espheni might just have insurance thanks to Weaver soon to be revealed betrayal. Though if Weaver sells out; I’m just happy Pope seems to be stepping up. I’d much rather see Tom and Pope work together than Tom and Weaver.

Meanwhile at Camp Espheni, Matt just got himself into some serious trouble thanks to Mira. Last episode we saw one of the brainwashed kids ‘graduate’ to go find her family’s camp and turn them in. Well this week, that girl returned and handed her parents over for ‘Skitterization’. The whole scene unnerved Mira and she decided to escape before they ‘turn’ her too. 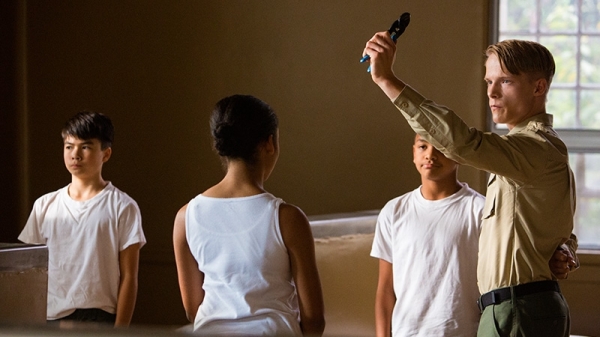 Matt tries to explain that he felt like her when he first arrived at the camp and that she has to be strong; but Mira steals some wire cutters and hides them under an empty bed. Rather than the entire camp get punished – and to protect Mira – Matt said than he was the one who stole them for which now he will be made an example of.

This couldn’t have come at a worse time because Cochise and his men just got to Matt’s location and found him; but now with Matt detained, it might be too late. Will Cochise and his men be able to rescue Matt or is it already too late? Maybe Matt has a plan of his own. Either way, this plotline will need more information before we can make any guesses; however, this segment does help us explain another segment.

Since Weaver first joined Tom in solitary, something has seemed off. There always seemed like there way more Weaver wasn’t telling us. Of course we assumed it was his pride in moving past his heart condition or his sorrow over losing his daughter; and yet something still seemed too off. He would always change the subject to Tom’s plan or something of the sort.

I tried to move past it because I thought I was over analyzing, but alas. It appears that Weaver is going to betray the 2nd Mass. During the closing moments of this episode, Weaver saw a Skitter following the group; but when asked about it he said nothing. Judging by the preview for next week’s episode, we know that he has betrayed the group for his daughter; but is it really his daughter.

Is Weaver part of a trap just like this girls parent were?

We saw in the past two episodes how kids are being brainwashed and then sent out to trick their parents. We also heard last episode that Jeanne was taken from the Ghetto along with Matt so it’s quite possible that Jeanne ‘graduated’ as well and is using her connection to her father to get to the rest of the group. It’s basically a trap within a trap. The Espheni are using Jeanne to get to Weaver to get to Tom and his group. We’ll find out next episode what happens as well as just how dire the situation is. Weaver is in for a rude awakening as his daughter might be past saving – both mentally and physically if she has been Skitterized/harnessed.

The last time we saw Anne she was becoming more and more unhinged in her search for her daughter. Between increased aggression and rarely stopping to take breaks, Anne’s single-mindedness was running her team ragged. Though it wasn’t just her team Anne’s endeavors were hurting. Anne finally passed out this episode after all the stress, no breaks and no eating.

While unconscious, Anne had a dream of an Espheni linked up with her via some dual umbilical chord while she was pregnant with Lexi. Disturbing image aside, this scene is very unsettling because it could be a tremendous continuity issue. A few episodes ago Anne mentioned how she’s been having nightmares that are actually repressed memories of when her and Lexi’s were kidnapped by the Espheni.

That would make this ‘dream’ actually a ‘memory’ that makes no sense. Anne and Lexi were kidnapped after Lexi had already been born; yet according to the memory Lexi was still in Anne’s stomach. The only alien contact Lexi had while still in Anne’s stomach was with the Volm healing machine. So this whole ‘connected to the Espheni from birth’ thing is completely filled with continuity issues.

Now it is possible that this was all just a dream; but then why set up for the ‘repressed memory nightmares’ a few episodes ago if the nightmares were just nightmares. Also, judging from the preview of next week’s episode, it looks like the Espheni are indeed treating Lexi as their child – similar to what Anne’s dream showed. There better be an explanation given soon because it’s one thing for fans to not remember in past seasons; but it’s exceptionally worse if the writers themselves don’t even remember.

As for life in Lexi-ville, after Ben told Maggie about seeing Lexi meeting with an Espheni, Maggie doesn’t hesitate to go back to her bad-ass former self. Though when questioned about her involvement Lexi maintains her usual ‘fortune cookie’ rhetoric until – like usual – she loses her cool and crushed Maggie’s hand. Lexi reminds them all that if they pick up their guns, peace will be broken.

It’s sad that they didn’t go show much of the other people’s reactions to Lexi talking with the Espheni. If Lordes or any of the other followers were startled by this revelation, they sure didn’t show it. Speaking of Lordes for a second, the fact that Anne – the woman who was her mentor for many seasons – has returned; maybe the old, non-crazy, more scientific Lordes will return soon. *crosses fingers*

Though as it stands this season has just served to perpetuate former creepy/evil female characters. Lordes and Lexi were both unsettling last season; and it seems like they’re staying on that path. More and more Lexi is revealing herself to be a naïve ticking time bomb. She believes she sees everything, which oddly enough makes her even more susceptible to manipulation. Now that Anne has found her – and recognized her immediately – maybe both of these characters can mellow; but judging from next week’s trailer, it looks like Lexi might choose the Espheni in an act of blind obedience.

I will continue to watch this season because I love some of the characters and because I truly believe a story isn’t over until the last page is turned. Though I whole-heartedly hope that things pick up. This episode introduced huge possible continuity errors, and continued to diminish new and dynamic characters into angsty and now-it-all brats. I’m going to keep hoping for the best; but if things continue on like this, then the ‘darkness from the west’ isn’t the only thing to fear this season. The real terror will be their odds of getting renewed for a fifth season.