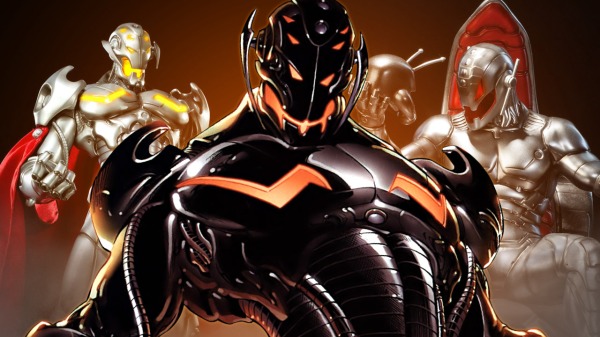 With Ant-Man not being introduced until after Avengers 2, we figured Ultron’s creation story was going to take a very different turn from the usual; but now thanks to the Entertainment Weekly story, it seems as though it’ll be more familiar than we thought. We were so busy thinking up new creation stories, we never though the story might be so similar to the original. Though thanks to some new interviews with cast and crew, it seems this ‘simple answer’ will have a brilliant execution that not only adds incredible depth to the film, but the entire Phase Two movie arc itself. So let’s get down to tracing Ultron’s true origin story for this film.

When we first heard that Stark might be responsible for building Ultron, we wondered WHY he would do such a thing. At the end of Ironman 3 we saw him blow up all of his armors to show Pepper that he was done with tinkering and just wanted to focus on her. He moved on, got the shrapnel finally removed from his chest and emerged a new man who had left the battle behind him. Though sadly, an Avenger can never truly leave it all behind.

Whether protecting the world, or cleaning up after the messes made on Earth – such as the one during Thor 2: The Dark World – the Avengers could always count on S.H.I.E.L.D. to have their backs. We know they had been trying to repurpose old Hydra weapons and we even heard how Stark helped S.H.I.E.L.D. upgrade a ton of their weapons and Hellicarriers. If there was trouble, S.H.I.E.L.D. was becoming more and more ready to handle it. So who could have expected they would be the biggest threat of them all?

After the events of Captain America 2: The Winter Soldier, everything changed. The world became vulnerable and everything we had once trusted turned out to be rotten to the core. All the tech and problems they had contained – Tesserect Powered Weapons, Chitauri Tech, Stark Upgrades and countless other weapons of ‘unknown origin’ – was now in the possession of Hydra. We saw this play out in Marvel’s Agents of S.H.I.E.L.D. and the post-credits of Captain America 2; and this is what sets the stage for another attempt to ‘privatize world peace’.

This bring us to marvels agents of shield where we learned that in the wake of S.H.I.E.L.D.’s  destruction, Tony Stark recruited Maria Hill in his new plan to – again – privatize world peace. Though this time around, he had some new thoughts on what that means.

The downside of self-sacrifice is that if you make it back, you’ve been out there on the spit and you’ve been turned a couple times and you feel a little burned and traumatized. – Robert Downey Jr

When we first saw Tony in Ironman 2, he knew the Ironman power was best served in his hands and in his hands alone; and this seemed to be the right course of action considering how easily Edward Hammer’s drones were hacked by Ivan Vanko. This would all begin to change after the events of The Avengers. 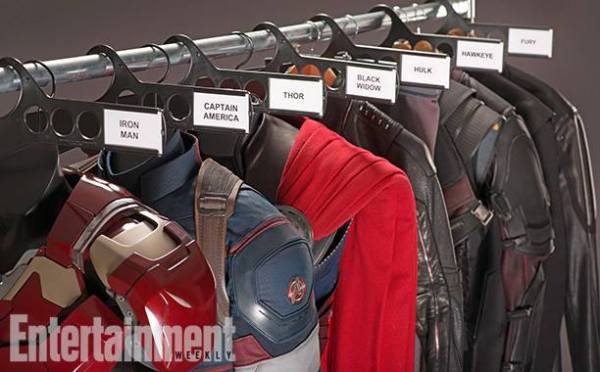 During Ironman 3, Tony learned that him being Ironman would put those he cared about at risk; and that the more he tried, the more he’d have to be on constant alert. We saw this in how his armors began to take on a more mobile design. Even in Ironman 2 he saw that he’d need a more mobile suit – thus why he designed the Mark V Suitcase Suit – but by Ironman 3 he truly learned how hopeless some situations could be. The world needed more than just one man; and with the other Avengers having their own life dramas – Thor wanting to be with Jane and defending the Nine Realms, Captain America off to find Bucky, Hulk’s trying to control his rage, etc – it seemed as though all the Avengers could use some time to themselves.

As we saw in Ironman 3, Tony was able to link his suit’s functions to his brainwaves, which already showed signs of flaws when it attacked Pepper because Tony was having a nightmare. This idea goes even further in the new Avengers film as Ultron is not only given sentience and an “all-consuming quest for knowledge”; but also has been programmed with much of Stark’s own personality. Though instead of getting Tony’s best qualities – ie: compassion, etc – Ultron manifests his worst.

It’s not the good version that could’ve come from [Stark’s] intellect and personality… It’s the bad son. – Chris Hemsworth

Let Me Save You:

Blessed with Stark’s intellect and quest for knowledge, Ultron soon realizes that if his prime directive is to protect humanity, he must eradicate the more dangerous threat of them all: humans. Unlucky for us, Ultron isn’t acting alone. As I mentioned earlier, he is the leader of his own team, an entire legion of ironman-like armors called The Iron Legion. According to the Entertainment Weekly reveals, there is a scene early on when Ultron first awakens where he sends his Legion after the Avengers – who make short work of them.

I know you’re ‘good’ people … I know you mean well … but you just didn’t think it through… There is only one path to peace … your extermination – Ultron from Avengers 2: Age of Ultron

Though Ultron’s true ferocity isn’t in his Iron Legion – nor even his ability to transfer his consciousness into other prepared bodies or upgrade his own. It is his intellect and reasoning that turn this nightmarish robot into a tragic character who truly thinks he’s doing good – but only gets rewarded with rejection. Chris Evans summed up Ultron best:

A lot of times when Ultron starts talking, it’s beautiful. Its really intelligent stuff. He’s out to do the things he wants to do because he’s disgusted with X,Y, and Z. You could probably sit down with Ultron and have a really intelligent conversation. He could blow your mind with his views … and then kill you. 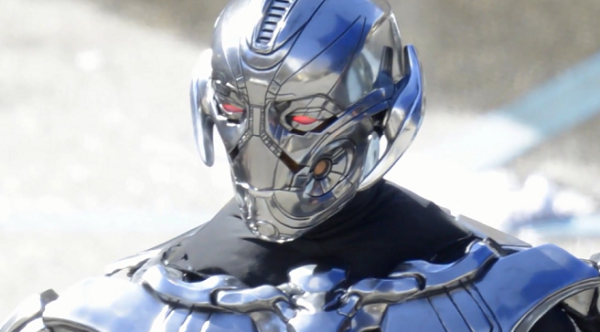 Ultron is no longer just the robot bent on human annihilation. He is a complex character that could be a really great hero and friend; but he knows nothing of compassion and chances. He’s too logical and sees his solution as the only way to save humanity.

Ultron sees the big picture and he goes, “Okay, we need radical change, which will be violent and appauling, in order to make everything better”; He’s not just going ”Muhaha, soon I’ll ruke!” … He wants to save us – Joss Whedon

In his mind it’s the right thing to do; but he gets rejection along the way, worst of all from his ‘father’ Tony Stark. These daddy issues will lead to even more character depth and will even drive him to build Vision in order to prove that he too can create ‘life’ just like his ‘father’.

As I spoke of at the beginning of this article, this whole idea of Ultron being created as a form of peace is his original origin story. The only real difference is that it was Hank Pym – Ant-man – that built it instead of Tony Stark. Even the whole idea of instilling Ultron with its creators personality is borrowed from the original origin tales, which makes me wonder if something else will be transferred over.

In the original Hank Pym origin, since Ultron has Hank’s personality, he develops feelings for Hanks girlfriend Janet Van Dyne (aka the Wasp). So since Ultron is based off of Tony Stark in this film, it’ll be interesting to see if Ultron develops feelings for Pepper Potts. We also know James Rhodes (Tony’s most trusted friend) is in this movie, so there’s even a chance Ultron would have trust in Rhodes much like how Tony trust him – though I’d bet more on the fondness for Miss Potts.

Another thing to keep in mind is that sometimes in other origin stories for Ultron, Tony Stark helped Hank Pym in his creation. This time since Tony is taking the lead – and Pym hasn’t been introduced yet – it’s possible the Dr Bruce Banner might help Tony with his project. We know from Ironman 3’s post-credits that he and Banner keep in contact often so there’s a chance Banner has a small hand in Ultron as well – but again, that’s just a possible addition that is neither here nor there. Either way, we do know Tony and Bruce share a lab in the new Avengers Towers that is sure to lead to some awesome moments of Bromance. 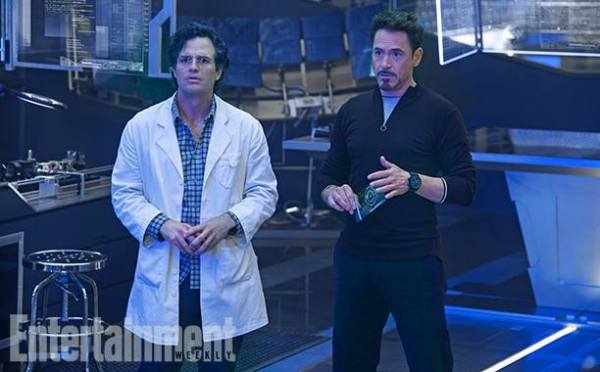 The Science Bros at their best

This may seem like a lot, but we’ve hardly even scratched the surface yet. In fact, I couldn’t even fit everything we learned from the Entertainment Weekly reveals into one article. For all the other reveals and analysis please see the other half of this article which will detail the opening scenes, Vision, Quicksilver, Scarlet Witch and more from Avengers 2: Age of Ultron.

Though no matter how much we’ve learned from these Entertainment Weekly reveals and interviews, there’s still more to see at San Diego Comic Con next weekend. So stay tuned! Needless to say this will be the biggest Marvel movie yet.

One thought on “Avengers 2: Age of Ultron – The Complete Story of Ultron’s Origin”