In a winter finale that acted at times more like a series finale, “Going Home” marks the end of the first half of Once Upon A Time’s 3rd Season. But with endings, come new beginnings. So let’s bid one final farewell and tie up this tale of life in a small town called Storybrook, Maine.

The End of the Shadow:

With the need for the wand of newly revealed Dark Fairy who was banished ages ago, the crew sets out to the church where Blue and the other fairies have been residing. Before they can search the place properly, Pan’s Shadow bursts in once more looking to stop them. 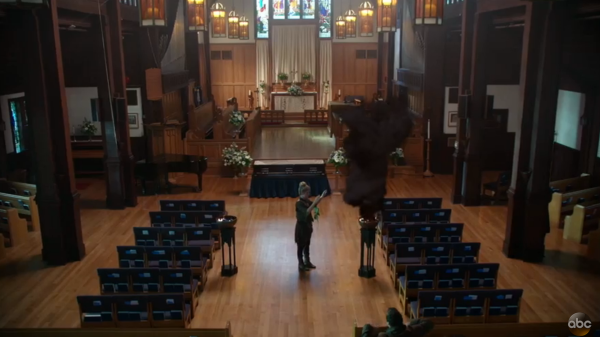 Tinkerbelle destroys Pan’s Shadow once and for all by capturing it and throwing it into the fire.

With Tinkerbelle finally believing in herself again, she is able to make the pixie dust work so that she can fly and capture the shadow once more. This time, she ends it by throwing the captured shadow into the fire, destroying it and freeing all those it had killed over the years – including Blue. With the black wand in hand and Tinkerbelle earning her wings back, the group makes their way back to Mr. Gold’s shop.

The Dark Curse – Recast and Broken:

Last week I listed the ingredients needed to enact the Dark Curse and wondered if Pan had what it took to cast it. Not surprisingly, Pan ripped out Felix’s heart after revealing that ‘the thing you love most’ could also stand for the thing that has the most loyalty towards you – which keeps continuity of how sacrificing her father worked for Regina.

Pan (in Henry’s body) rips out Felix’s heart without a second thought.

With the curse recast, Rumplestilskin revealed that only Regina would be able to stop it. Once Henry and Peter Pan were back to their original bodies, Regina was able to get the scroll and learn that undoing the curse would destroy Storybrook and send all those from The Enchanted Forest back home. Realizing this includes everyone but Henry, Regina tells Emma that she must stay back with Henry. After tearful goodbyes, Regina gives Emma and Henry new memories so that they might live happily ever after.

The residents of the Enchanted Forest give Emma and Henry a tearful goodbye before Pan’s curse catches up with them.

No Redemption For Pan:

One of the ongoing mottos of Once Upon A Time is that evil (like good) is created – not born – and thus can be redeemed. We’ve seen villains such as Rumplestilskin, Regina, and Hook get second chances. Cora never lived long enough to see one, but at least in her final moments we learn that everything she did was truly for her daughter.

Pan demonstrates the complete opposite of this and shows no remorse for anything he has ever done – not even throwing away his own son. When Rumplestilskin gives Pan a chance to talk and see how things might have been, Pan reveals what a truly disgusting character he is when he tells his son just what he’s thought of him since day one:

“I remember looking at you, the littlest babe, helpless and all mine. Those big big eyes just full of tears. Pulling at me, pulling away my name, my money, my time. Pulling away any hope of making my life something better for myself. This pink naked squirming little larva who wanted to eat my dreams alive and never stop. What are you now, a couple hundred? Why can’t I be free of you?” – Peter Pan

At his very core, Peter Pan was a selfish manipulative drunkard who couldn’t even fathom caring for anyone but himself. He sacrificed any chance of redemption long ago and thus became a whole new kind of evil. One has to wonder just how evil any upcoming villains might be.

While the others are frozen by Pan’s spell, Rumplestilskin summons his shadow so that he may reclaim The Dark Ones dagger and finish Pan off once and for all.

There’s an old saying about how ‘one meets his destiny on the path he takes to avoid it’. We’ve certainly seen this happen with Rumplestilskin time and time again. Since we learned about Henry being foretold as Rumplestilskin’s downfall in Season 2, Mr Gold has struggled between doing what is right and his inherited need for self-preservation.

“You see the only way for you to die, is if we both die. And now, I’m ready!”
– Rumplestilskin

By accepting his fate and sacrificing himself, Rumplestilskin does a lot more than just defeat Pan physically. He rejects the selfishness need of self-preservation he’s seen his father exhibit time and time again. By making a selfless sacrifice, he is able to stop the selfish monster known as Pan.

Rumplestilskin plunges the Dark Ones dagger into Peter Pan and himself, causing Pan to revert back into his true old self.

Despite one of the most heart wrenching goodbyes ever, is Rumplestilskin really dead? Personally, I think whether or not he is, Rumplestilskin will return. Why? Several reasons:

Dead? Alive? Reborn as ‘The Light One’? Who knows? All we can be sure is that we haven’t seen the last of Rumplestilskin and Belle’s story. So until then, #BringBackRumple

Hoping true love can break any curse, Hook greets Emma with a kiss so that she can remember who she is and help him save her family back in The Enchanted Forest.

In the final moments of this episode, we flash forward a year later to see Emma and Henry enjoying their ‘happily ever after’ until a familiar face appears at the door. Hoping for a kiss to break the kiss, Hook returns and tries to persuade a skeptical Emma about how her family is in danger. After a quick knee to the crotch, Emma kicks Hook out and wonders who left the door open downstairs.

What happened to Snow, Charming and the others? How can Hook get Emma to remember? Who is this new villain and what does she have planed? 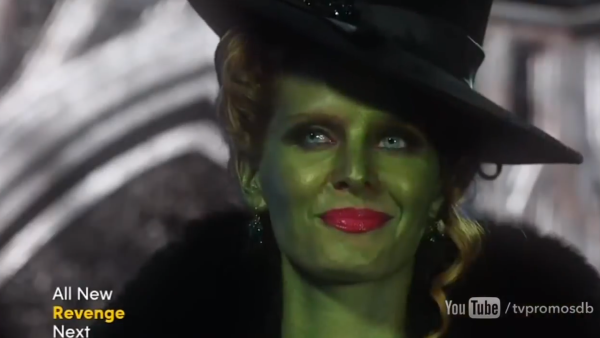 Rebecca Mader joins the cast as The Wicked Witch of the West when Once returns March 2014.

Keep a look out for my upcoming ‘Looking Ahead’ for the March Premier. So subscribe and be sure to let me know what you thought of this episode down below in the comments. #WickedIsComing