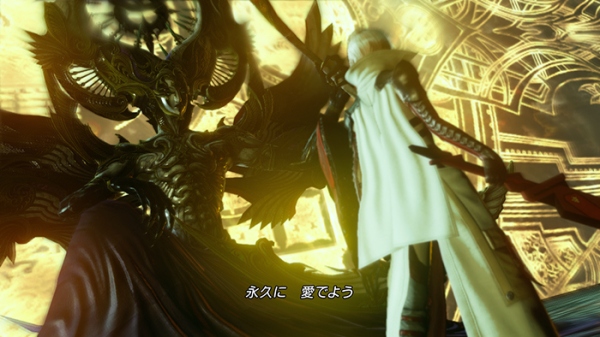 It’s the final day, the day the world ends. You just learned that God has been manipulating you from the start. He’s taken your sister, used your friends, and is seeking to purge the world of the unpredictability that is humanity. It’s time for you to become the Savior you always wanted to be, but how can you kill the God of gods?

Bhunivelze might not be the glorious, all-loving God he was though to be, but he is just as powerful as the legends said. If you’ve already defeated Aeronite and Ereshkigal, then you already know how demanding this boss battle might be. The strategy that follows is not only very safe, but also incredibly fun if you like aggressive plays.

Note: The Forsaken Tie wasn’t really necessary, nor was the Beggars Beads. The elemental types don’t matter as much either. By the end of this summary you will see the real focus of this strategy. The rest you can play around with.

Primer: Considering it isn’t that difficult, be sure to complete the four “trials” on the final day to obtain the Ultima Weapon/Shield. It also helps if your abilities for Schemata 3 add to your Strength. When I completed this Schemata my Strength was around 4000 between Quests, Ultimate Weapons Bonuses and the Warrior Hunter’s Mask 15% boost.

Items To Bring: I didn’t really use any items. I got sloppy at one point and needed a Phoenix Down and a Hi-Potion. Beyond that I didn’t use anything. Although an Ether or two would have been nice since you have to last 4 complete rounds with him. 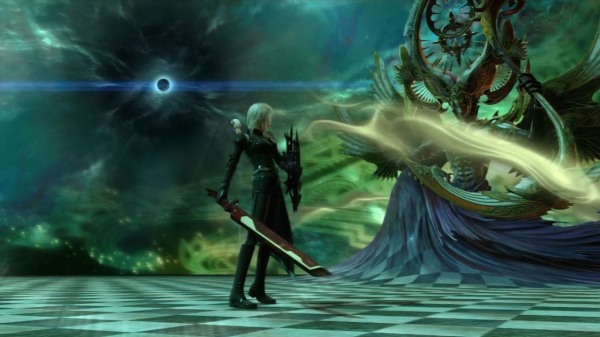 For the first phase of battle, Bhunivelze will cast Doom so you have to achieve a stagger and kill him before it goes out – which considering your strength parameters isn’t that difficult.

During this stage, Bhunivelze will throw his dual-sided scythe at you multiple times in succession. Be sure to block these as they can become quite annoying. Besides this you should start off in Schemata 3 and cast Deprotect, then switch to Schemata 2, cast Imperil then hammer away with alternating Fira and Aerora making sure not to do a finisher. This should start the stagger bar going, then switch to Schamata one and keep hammering with alternating Thundaga and Aeroa. Switch between these to raise his stagger and remember to take advantage of the Quick Stagger auto-ability of Chaos Revenge in Schemata 1. Once he hits stagger, immediately switch to Schemata 3 and pound away with Heavy Slash – don’t forget you also have a less powerful but still decent Heavy Slash available in Schemata 1 as well.

DO NOT go crazy on the Overclock. Once you kill him here, he will change forms, but you will still carry over your status and EP. Keep in mind that you have 3 more rounds to go the distance. If you have an Ether or two, fine; but this is the easiest form so save your EP. Once he falls he will switch into a magic heavy form – which is where Schemata 2 comes into play.

Here Bhunivelze will use magic attack after magic attack. Many videos and battle primers tell you to Perfect Guard. I say forget that, and absorb it. The Preta Hood and Quiet Guardian in Schemata 2 work together to all but nullify any and all magic attacks. So any time you see him about to cast a spell, switch to Schemata 2 and keep pounding away to make him reach stagger. 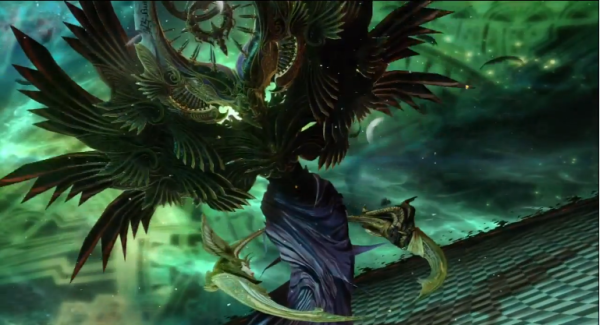 From here on out it’s the same strategy as before. Status ailments, alternating spells to stagger, Chaos Revenger to break stagger, then hammer with Schemata 3 – and 1 to an extent. Schemata 2 is purely for defense and added stagger. Don’t look to it for damage.

Bhunivelze will switch to a physical offensive, so be sure to guard and be patient. Keep the same strategy as before and stagger then attack. His Holy Blade attack will bestoy various status buffs on him, but since he’s all physical this stage, Bravery is the one you have to watch out for. So switch to Schemata 3 and use Heavy Slash, which has now become Bravery Thief thanks to Warrior Hunters Mask.

If you see him starting up his Hypernova attack you have one of two options – depending on your stagger level. Either get ready to block for dear life or Overclock to stagger him then again to Heavy Slash him to death. The ‘dazed’ status ailment he contracts after stagger will allow you to inflict ridiculous amounts of damage to him with Heavy Slash.

Once he reaches his final form, his resistance will go through the roof. For all intensive purposes this is your final test to see if you can stagger. Stagger will be very hard to work towards, but is still very doable with this set up. I believe in you!

His Heartless Angel attack leaves him idle while he charges up, so use magic after magic to push towards that stagger. Once he hits stagger, wage an all out attack on him. Use any Overclocks you have left and be sure Deprotect – as well as any other status ailments you wish – have been cast on him. 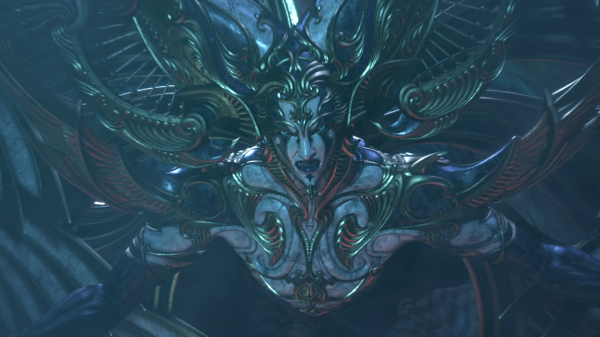 Congratulations you have defeated Bhunivelze. Now sit back, give yourself a well-deserved pat on the back and watch the closing cinematics. Be sure to save when prompted so you can load it up when you want to start a New Game +. If you didn’t get his Double Deity weapon drop, don’t worry. It had only a 5% chance anyway. So if you want, when you’re prompted to save, create a new save file. This way you can load the new game for a New Game + but still have the pre-fight save file to try again and again for the weapon of God himself.