Last night The Muppets premiered on ABC and there seems to be some slightly mixed feelings about it – well depending on who you ask. The majority of people who know the Muppets loved seeing this 30 Rock + The Office style show with their favorite childhood stars. Though some people seem to think this new show “ruins” their childhood and “perverts” the original idea of the Muppets . . . *facepalm* It’s time to get some perspective.

It seems like these people are confusing the Muppets with Fraggle Rock or Sesame Street, because the Muppets were never a ‘children centered program’. Yes, we loved watching them as kids, but the Muppets’ first format was a variety show. Take a look at their films and their various shows. It doesn’t take long to see that the Muppets have a good balance of cute and adult humor.

What The Muppets does is continue the idea that they real people. They aren’t imaginary friends or ‘beings’ that live in this special secluded place, but rather exist in our world as a whole. They’ve gone on multiple adventures through in various times and sometimes with some very unsavory people.

So why all the outrage this time? Well The Muppets is definitely a bit darker than what we’re used to, but that’s not a bad thing. Even if we consider The Muppets a part of childhood, then why can’t they grow with us? 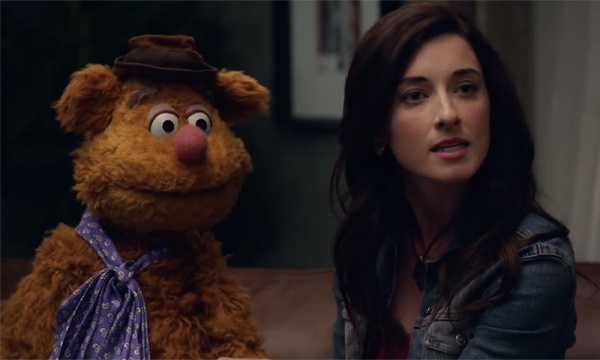 ABC really nails it with The Muppets as they seamlessly create a workplace comedy with imaginary characters. Each Muppet gets depth to his or her own personality as opposed to just a stereotyped base character. And even those who do maintain their character intact become jokes of their own and become the perfect straight man to balance out the antics – such as how super conservative Sam the Eagle is in charge of censorship and feels ‘handshakes lead to sin’.

Childhood as a stage ends and anyone who thinks otherwise is gravely mistaken. Though there is nothing against keeping our inner child intact while we grow – and THAT is why The Muppets is a wonderful show. It allows us to spend time with those important characters we met in our younger years, who – like us – have grown in this world. We face bigger problems today than we did as children, and the same is true of our Muppet friends.

The Muppets is rated TV-PG, same as all those other shows I mentioned. This show is for us – those who have grown up with the Muppets all our lives. If you don’t want this to be your child’s first introduction to the Muppets, then don’t. There are PLENTY of other Muppet shows and films that you can get on DVD.

So enjoy this show for what it is, another chance to think those adorable Muppets we knew from childhood ARE real! Like us, they’ve grown and face plenty of new challenges in life. The Muppets shows that no matter how old you get, the Muppets aren’t getting outdated, but instead are growing right alongside you. And you’ll see that the ideas of “keep trying” and “everything works out in the end” isn’t just some childish dream, but in fact remains true no matter how old you get.