The Walking Dead is not letting up this season! What at first seemed like a ‘prequel’/backstory based episode erupted into one of the bloodiest we’ve seen yet as the wolves launched their attack on Alexandria. So let’s dive into the finer points of The Walking Dead “JSS”.

As the episode began and we saw Enid always wrting the letters JSS, we knew the meaning behind these letters would explain the episode title by the same name. So what did it mean? Just Shoot Something? Was it an abbreviation of Jesus without the vowels. Well both of those are wrong as we learned by episode end that JSS is Enid’s mantra after her parents death “Just Survive Somehow”. Although if we look at the episode beyond Enid, we actually see this idea all over the place.

Through the episode we see multiple characters express different ways in which they cope. On one hand, Carol tells people to just move on and we see her not hesitate an inch to kill someone. On the other, we see Morgan who does everything possible to not kill everyone. Two very different styles that come head to head this episode, and each one struggles with it as the episode continues. Although in the end, both choose their path and fight as hard as they can because they have people worth fighting for. And whereas our usual heroes know full well how to “just survive somehow”, we find the residents of Alexandria experiencing it for the first time.

The Broken Window Theory Returns – The State Of Alexandria:

Last season, Rick talked about the “broken window theory”, which stated if you want to keep society in tact, you have to keep the windows in tact. Ironic timing considering he flew threw the window with Pete not long after saying this. Although insightful viewers would have noticed a moment where the camera lingered on a broken window during the Wolf assault. The society of Alexandria is broken; and even though it’s not completely destroyed, the days of the old Alexandria are completely over.

We’ve seen people fear Rick’s group because of what they’ve done. And even after the Pete scenario, some still refuse to accept it – *cough* Ron – but after this assault on Alexandria everyone sees what life is TRULY like out there. If they still continue to live in their delusion – *cough* Ron again – then there’s no place for them in Alexandria because with numerous deaths and more problems to come, Alexandria is finally preparing to accept this new world in a rational manner. But will they be able to finish preparing in time?

Trouble Not Far – What’s Coming Next & Back:

Morgan made it back to Alexandria in time and Carol kicked some serious wolf tail! So everything is fine right? Wrong! The horn might have stopped and the wolves might have fled with the tail between their legs, but that mega herd of walkers was still last seen heading towards Alexandria. This episode dealt with a mini time lapse and left off with one as well, which means next episode we’ll see Rick and his group either try to get the mega herd back on track or evacuate quickly back to Alexandria before the sea of death hits. Although there is still another more ‘calculated’ threat out there to worry about. 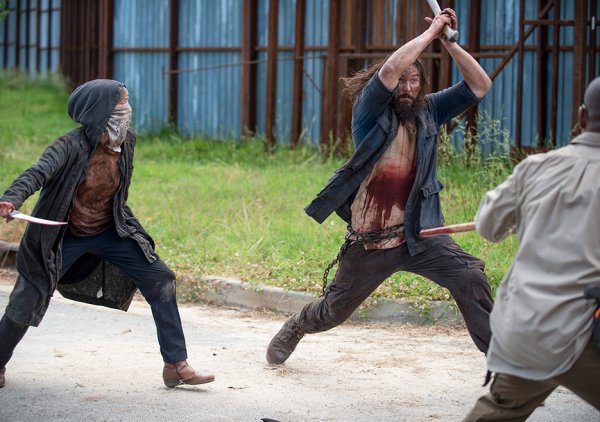 Carol might have taken down most of the wolves, but Morgan did let a few go. Additionally, we saw one pick up a gun from a body after Morgan spared him. One man with a gun isn’t that much of a threat; but that’s not the point. That gun is almost certainly going to come back to haunt Morgan; but the main point here is that when those wolves return they’ll return prepared. And whereas they might not all come with guns, they WILL come with their secret weapon – that was surprisingly missing this episode – the trailers full of walkers. Those paired with the nearby mega herd could lead to an even bigger battle in the near future – seeing as how this season doesn’t seem to be letting up anytime soon.

I’m beginning to think this isn’t an extended season premier and this entire season is going to be THAT explosive. So come back next week as Rick and the gang still outside the walls tries to keep things together.