The Walking Dead has returned to AMC with the second half of Season 4, but rather than dive into these first two episodes individually, I’ve decided to combine them since their structure and overall purpose are much better portrayed when taken together. With the prison now in ruin, we find the survivors broken and scattered. Much like the CDC and farmhouse before, the prison was nothing more than a temporary shelter that made them too comfortable in this post-apocalyptic world. So how have these five groups of survivors been handling it?

Still badly injured from his struggle with the Governor, Rick seemingly become more of an inconvenience to Carl than a help. The two fight constantly and at one point Carl even throws Shane in his father’s face – Carl doesn’t know the extent of Rick, Shane and Lori’s relationship. The next morning when Carl awakens to discover he can’t wake Rick up due to the severity of Rick’s injuries, he decides that Rick is just holding him back and decides to set off on his own to make some supply runs. Through Carl’s brief solo adventure, he starts to learn that he still does need his father for things – reaching the higher shelves being one of them. 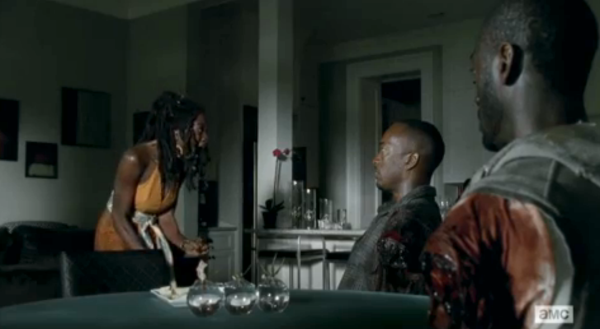 Through the dream of her past, we see just how much Michonne has lost and why she was so cold for so long.

Meanwhile Michonne’s grief starts to bleed into her dreams. She dreams of how things used to be before the apocalypse, but as the dream continues her current life starts to reassert itself: her baby disappears, her boyfriend and his friend Terry revert to her original walker duo, and the Atlanta skyline from her window crumbles. She was right next to Herschel when he was beheaded by her own sword. She refuses to follow Rick and Carl’s tracks and just walks along with a herd of walkers until she spies one that looks like her. In possibly the most badass moment of The Walking Dead yet, Michonne single-handedly takes out an entire herd of walkers and runs off to track Rick and Carl’s footsteps.

Back with sleeping beauty and the lone ranger, Carl basically gives up and goes back to his father’s side, but when Rick stirs it appears as though he has turned. Carl can’t bring himself to kill his father and lies prone accepting death only to discover his father lives. The two apologize for their actions – Rick now seemingly more healed after his injury-induced-coma  – and then have a tearful reunion with Michonne.

Beth scolds Daryl for not trying to track their friends.

Even though this all takes place after Group 3 (Tyreese, etc), it comes first in the episode to set the tone. Through Beth’s journal we get to see just how safe they felt in the prison and how it was literally their last hope. With it gone, Beth constantly tries to keep hope alive in finding others while Daryl starts to become cold again. They finally make it to the railroad tracks where they find a walker devouring Luke – one of the little boys from the prison – which causes Beth to break down and cry.

We find Tyreese in the woods with not only Lizzie and Mika – who helped save his life back at the prison – but also with baby Judith. Through this portion of the episode we are reminded of the problems a crying baby can cause in this new world. Later in the episode, Tyreese runs off to try to save some survivors only to be reunited with Carol who then joins the party. Besides Judith being alive, there are several very important things to note for this group in regards to the first half of Season 4.

The first is that Tyreese doesn’t know that Carol killed Karen. When Carol first appears you can see she’s uneasy as Tyreese approaches, but when he hugs her and asks where she was, she makes up a story about how she didn’t make it back to camp in time after a supply run. 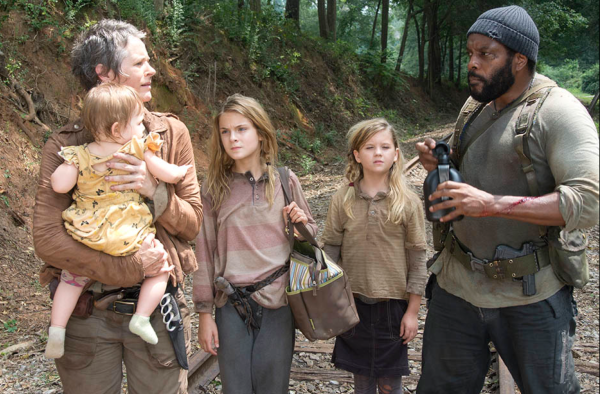 Why is Lizzie still looking at Judith like that?

The next is this safe-haven known as Terminus at the end of the tracks. Since Season 1 we’ve seen signs of a fortified military safe-haven. The helicopter over Atlanta, and more recently the radio interference Daryl and them heard in the car before the massive walker herd in “Infestation”. Could this all point to the same place?

The most disturbing thing in this episode wasn’t any of the walker attacks or the sense of hopelessness, but rather Lizzie’s actions. In this episode we not only saw her gut a family of baby rabbits – cruelty to animals as a child is a sign of sociopathic tendencies – but also almost kill baby Judith. When the baby started crying, Lizzie placed her hand over the baby’s mouth to quiet it … but went too far. When Judith squirmed that she was hurting her, Lizzie kept the pressure on. She seemed to be enjoying it and even ignored her sisters cries to run. I don’t even think Mika’s gunshot snapped her out of it, it was probably Carol who knocked some sense into her. Considering Carol is the one holding Judith after this scene, it might fit.

Considering what we learned this episode about Lizzie, we might have the answer to one of the mysteries of Season 4. Earlier this season we saw that someone was dissecting rats and was feeding them to walkers. After seeing Lizzie in this episode, I think we found the culprit. Add in Lizzie’s affinity for naming walkers and how her own sister described her as “messed up, not weak”, and we get a full picture of this character. 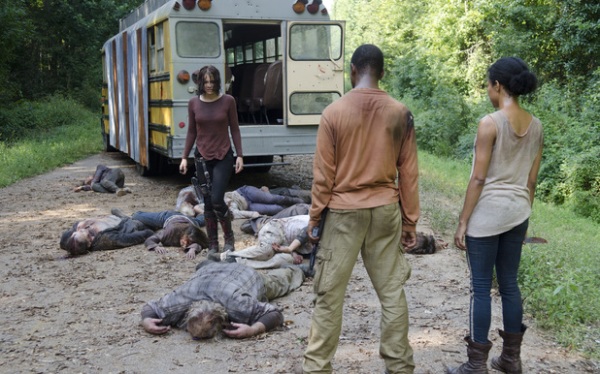 Like her sister’s situation, Maggie is very set on finding other survivors – namely Glen of course. On their travels, they come across the escape bus filled with walkers. At some point, someone on the bus must have turned and killed everyone else. Maggie tries to check the walkers one at a time to see if Glen is among them, but they become too much to handle all burst out of the bus. After Maggie beats a few senseless, she breaks down crying, but it is unsure if these are tears of loss because she can’t find Glen or if they are tears of joy because Glen wasn’t one of the walkers and thus must have gotten out.

Speaking of Glen, we find him oddly enough back at the prison. Apparently having escaped before the bus pulled away, he wakes up on a destroyed bridge -narrowly missing a tank shot. After getting some supplies from the cell blocks together, he domes his riot gear again and heads out to find Tara (Alanna Masterson) along the way. Still racked with guilt over what The Governor made them do, Tara doesn’t understand why Glen wants to help her. After identifying with his desire to be with the one he loves, she joins him.

Alanna Masterson joins our group of survivors as the feisty Tara.

After making it out of the prison, Glen collapses still weak from the left over fever – also considering he LITERALLY pushed his way through the center of a herd of walkers. Tara aggressively finishes off the final walker and looks up to see several visitors watching from the safety of a military convoy. Could these newcomers – Abraham, Eugene, and Rosita – be from this sanctuary known as Terminus?

If we are to assume this Militia group is part of Terminus, then we have quite the rendezvous coming up. With Groups 2 & 3 following the railroad tracks towards Terminus and Group 5 already headed there with the militia group, that leaves only Groups 1 & 4 unaccounted for geographically.

On the Talking Dead episode for “Inmates”, it was joked that the intro should be more Game of Thrones-like so we can see where everything is in relation to everything else. With Rick and Maggie’s group unaccounted for, it’s difficult to know if they’re walking toward this supposed safe-haven or – like Andrea and Michonne before them – towards the new Woodbury. Then again, what if Terminus is the new Woodbury?

For those of you familiar with the comics, the pose Eugene, Abraham, and Rosita (from left to right) take is an exact mirror to the cover of Issue #53.

With all these new alliances and returning characters, we are bound to have some stuff hit the fan. Here are the possible sources of drama, revenge fueled hatred, and just general awkwardness to come:

Since Rick never told Tyreese about Carol’s involvement in Karen’s murder, Tyreese welcomed Carol back with open arms – literally. Although considering everyone will be reunited again, Tyreese is sure to find out. We’ve seen him zone out in a blind rage before so one can only imagine what would happen when he finds out. That being said, there is actually another interesting theory out there.

Amanda Remling at IBTimes wrote a great article about how Carol might not have been Karen’s killer, but was instead covering for Lizzie. This theory not only fits with/confirms my rat theory, but also strengthens my idea that Carol was the one who had to stop Lizzie from smothering Judith. We know something is definitely off about Lizzie, but is it just staring now or have we already seen its effects. Nice work Amanda!

Quite a few people had been pulling for a Daryl/Carol romance, but when Rick kicked her out those hopes basically fell flat. In the episodes that followed, Beth started to seem more like the romantic interest for our favorite poncho wearing archer. With Carol return, will the hopes of romance return as well? If it does, Darryl will find himself in the middle of two very different women – ok, a woman and a girl who just turned 18.

Glen showing up with a cute new girl? I don’t think Maggie is the jealous kind, but after her breakdown in this episode, who knows. On the other hand, Glen showing up with a cute new girl who was with the guy who beheaded her father . . . . PROBLEM! With how she broke down in the bus raid, it’s hard to say how Maggie will react. Although considering Tara thinks of herself as partially responsible for Herschel’s death, there’s a strong change Maggie might as well.

Remember that newly forming romance between Tara and that woman in the Governor’s camp, the woman who pinned Tyreese with gunfire, the woman whom Lizzie put a bullet through her head? Yah, there might be a problem with this one. Yes, it was to protect Tyreese and everyone can understand what happened in the heat of battle, but that doesn’t mean Lizzie will leave it at that.

Did you notice Lizzie’s dig to Tyreese about how Mika isn’t like Tyreese’s sister Sasha because Mika is still here? Lizzie is quite the little sociopath who already shows zero concern for people’s feelings or lives. I wouldn’t be surprised if she tries to dig into Tara as well.

With everyone caught up and coming back together, this season can now move forward into new territories. What does Terminus hold for the survivors? Is it truly the paradise everyone says it is or is it another Woodbury hiding corruption? One thing is for certain: with each new safe haven, the dangers become greater. If Terminus is that safe zone, what will eventually be its downfall?

2 thoughts on “A Closer Look: The Walking Dead “After” and “Inmates””