Though it by no means has the span or numbers of the other series finale this week – CBS’s How I Met Your Mother – Once Upon A Time: In Wonderland showcased a series finale that was as impressive as it was beautiful, and instilled a love for this show I wish I had much sooner. There was no attempt to make anything more than it was. This was a simple and concise ending that answered all questions, left room for future crossovers, and – most impressive of all – successfully pulled off a flawless Xanatos Gambit!

What’s a Xanatos Gambit; and why am I so excited about this finale? All will be explained soon. So let’s break this episode down and bid a fond farewell to this series that was truly a diamond in the rough.

A Xanatos Gambit is a literary trope in which a character devises a plan that succeeds regardless of the outcome. In short, it’s a win-win situation. If the name sounds familiar, it’s because it was based on the 90s animated series Gargoyles in which the main protagonist – David Xanatos – somehow always found a way to come out on top despite numerous plans being foiled. 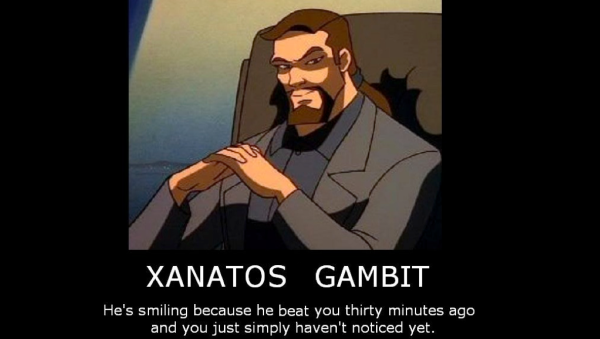 In last night’s episode, Amara, Cyrus and Alice set upon a grand plan in order to defeat the now all-powerful Jafar. With the ability to change the rules of magic, there was no way they could match him head to head; but what if they could steal the source of his powers? Jafar’s powers were drawn from the three magical genies, so if the genies suddenly became free – and no longer genies – the source for Jafar’s new powers would be gone. The only way to free the Knave and Cyrus’s brothers from the genie curse was to return the water used to heal Amara to the Well of Wonders – which would kill Amara. So how is this a Xanatos Gambit? Let’s look at the possible outcomes:

“So now that I’ve stolen your water, what do you plan to do?” – Jafar

Amara and them knew that if Jafar learned of the Well of Wonders, his foolish pride and unending search for more power would make him take the waters for himself. This action would transfer the curse to him since the water guardian would know of Amara’s true intent to return the water. How did she know? The water guardian could manifest herself from any water that wasn’t freely given by her – as we saw when she appeared in Amara’s home. This also explains how Amara knew that the Guardian could sense her presence, thus Cyrus stealing more water to summon her was unnecessary.

Whatever the outcome, Jafar was done. Whether by the plane to negate his powers or by his own inferiority complex, he couldn’t win. The Xanatos Gambit works.

Although his beginnings might have been different, his ultimate fate would be the same. Anyone who remembers Aladdin, knows that it ends with Jafar wishing to be all powerful but then becomes jealous that his powers are still inferior to that of a genie. This leads him to wish to be a genie, gaining all of a genie’s powers, but now being a slave to it as well.

Jafar’s fate in Wonderland is a perfect call back to these events. Despite having the powers to change the rules of magic, Jafar still wants more and seeks the magic of the Well of Wonders for himself. This selfish act leads to him once again becoming bound to the genies curse.

With the Jabberwocky once again imprisoned, Anastasia returned to life for real – since she was never meant to die in the first place – and Alice & Cyrus’s wedding back home in England, the series came to a perfect close. No outstanding loose end to clear up, or anything that needs explaining to warrant another season. It’s just one great self-contained story.

Though to be fair – or play Devil’s Advocate –, I never really understood how Alice’s Victorian England seemed concurrent with Storybrook – both are in the real world. Maybe the White Rabbit is a Time Lord and can travel through space and time. As for a non ‘timey-wimey’ explanation, Once’s wikia seems to claim that Victorian London is a land separate from ‘The Land Without Magic’. Whatever the case is, I’m willing to accept this explanation since it does make some sense and in the long run isn’t that important.

What is important is what this will have on the main stage, Once Upon A Time. It has recently been revealed that the Knave of Hearts – Michael Socha – will be joining the cast of Once as a series regular for its upcoming fourth season. Now ABC has yet to confirm that there’ll be a 4th season for Once, but with it being one of their highest viewed shows, it’s a very safe bet.

He has an army, but does he have a Hulk? Great, now I want a Jafar and Loki crossover

I have to be honest: Wonderland wasn’t my favorite show in the beginning. It didn’t draw me in immediately like the original Once did. Some characters were amazingly crafted like Jafar while others seemed to fall a little flat – like the Knave. I watched because it was decent, but I didn’t feel as strong a love for it – as you could tell by my less than regular episode recaps. It just seemed like the writers had stretched themselves too thinly.

After watching this finale, I have to say I’m sorry I ever doubted them. This was a brilliant ending that perfectly balanced tying up loose ends and leaving behind something for the main Once Upon a Time to work with. Even the Knave surprised me in the end. He always seemed – well as I just said – flat, but he’s come a long way in these closing episodes. I honestly look forward to his appearance in Once Upon A Time and am glad he made the cut. With his role as Will Scarlet of Robin Hood’s Merry Men, his story has the best connection and now his character has the strength it needs – as well as the snark like when he jokingly ‘objected’ to Alice and Cyrus’s marriage.

Awww, this is it everyone

So thank you Edward Kitsis, Adam Horowitz and everyone else who worked on the show. You gave us an incredibly satisfying – albeit brief – series that showed a different side of the beautiful world you started in Once Upon A Time. In my honest opinion, you win the award for Best Series Finale of the week. You didn’t pretend to be something you weren’t. You delivered exactly what you needed to, and left us happily wanting more. Bravo!