Usually a season finale will aim to resolve a season’s worth of stories and inject one final cliffhanger moment to get fans excited for next season. This however is not true of FOX’s new hit Sleepy Hollow, which left every character in mortal inescapable danger. It was quite the gamble for a new show to leave off at such a drastic point. If they hadn’t been renewed for a Season Season then it would seem as though evil had won.

Thankfully the show was renewed for a Second Season; but who really doubted that choice. With brilliant writing, and amazing cast and logical plot twists that even I didn’t see coming, Sleepy Hollow is quickly becoming on of the best shows on Broadcast Television – and maybe Cable. So with Season One behind us, let’s take a look at some things we can expect from Season Two – as well as what other ‘Revelations’ might come to light.

When We Last Saw Our Heroes:

So let’s do a quick recap of every main character on the side of good, and see where this season left them:

“Yes! So where do you go from there? All of the principal characters are dead or in purgatory, or in car crashes or in prison or something; and it’s just me!” – John Noble proclaimed triumphantly at SDCC

Everyone status is not only dire; but also puts them in a situation where their release is dependent upon another person helping them. Though with everyone else being in dire situations themselves, there is no one available to help. So how can anyone be expected to make it to Season 2?

Oh John Noble, why must you be so charming… even when you’re being devious lol

Producer Alex Kurtzman spoke of how they spent so much time getting Ichabod into that grave and making it a shocking twist that they “didn’t want to get him out and make it seem easy” next season. Whereas I’m sure Kutzman and Robert Orci will have plenty of surprises in store for us, I do have my own theory on how these inescapable situations just might be dealt with.

Again, each character’s situation is dependent on someone else intervening; but with everyone ‘tied up’ there’s no real chance of that occurring. Well there actually is someone who can ‘cross over’. As we learned last Season – when Ichabod first visited Katrina in the forest of purgatory – a soul can only go there if dead or near death; and Abbie’s sister Jenny is pretty close to death. This means that Jenny can in fact go to purgatory and find Abbie. Though how would Jenny know Abbie was in trouble?

Well as we learned in Abbie’s situation, she’s being protected in a safe house that directly mirrors the ‘doll house’ her and her sister used to escape to to get away from their parents. Whereas this place keeps Abbie safe from Moloch, she is not allowed to leave from it either. Abbie might not be able to get out; but one other person could ‘hypothetically’ be let in – her sister Jenny.

Since echoes of Abbie and Jenny’s former selves inhabit the dollhouse, it’s reasonable to beleive that Jenny would also be brought into this safe haven. Now thus far we know of two ways to leave Purgatory: have your sins forgiven or have someone take your place. I doubt Abbie would be forgiven of all sins so easily – since this show is all about sins – so that leaves Jenny to take Abbie’s place.

Though however she does it, my theory is that Jenny’s death/near death experience brings her to Purgatory where she frees Abbie. Once Abbie is freed, Jenny – who is still in purgatory – would have knowledge of various unseen thingsl and could thus direct Abbie to where Ichabod is in trouble. Abbie digs Ichabod up and let the season begin. As for how Kratina and Irving are saved, I’ll get to that a little later.

Between San Diego Comic Con, Entertainment Weekly and other various news sources, we’ve gotten to hear quite a bit about the new season. The themes this season will be redemption, family and hope as well as how they all fit within the context of war. Although war isn’t the only thing coming to Sleepy Hollow as there is a new Sherriff in town. Sakina Jaffrey will join the cast as Lena Reyes, who will be the new sheriff in charge of the police force in Irving’s absence.

Lena is described as someone who “has a history in Sleepy Hollow but has been with the border patrol.” It’s also been revealed that Lena has a strong connection with Abbie’s past, though as for what it is we’ll have to wait and see. Now it might just be me, but I can’t help but wonder if “border patrol” means country border or a more supernatural border like between good and evil.

In addition to the new Sheriff, an arms dealer/bounty hunter named Nick Hawley – played by Matt Barr – will also start appearing around town. As for more ‘Revolutionary’ characters, Benedict Arnold will be making an appearance, as well as Ben Franklin who will be playing a large role this season – as well as his affinity for ‘air baths’. You can be sure there’ll be more ‘twistory’ with these historical characters; and one such rumored ‘twist’ was that the key on Franklin’s kite was actually the key to Purgatory. Sounds like that was less of a lightning experiment and more of a destroy this key plan.

With now two of the Four Horsemen released, you can be sure there’ll be even scarier and more powerful monsters coming through the void. A succubus has been confirmed as well as a Wendingo – which unlike the ‘sand man demon’ last season is actually a true Native American legend. There will also be a demonic new take on the Pied Piper. Even Moloch is getting a new look – rather than the constant blurry footage of him. In a way, each of these new monsters will somehow reflect the themes and personal journeys each of the main characters is going through: succubus (seduction), wendingo (savagery and shape shifting), Pied Piper (blindly following), etc.

These concept arts of Moloch’s, The Kindred and the Pied Piper were released in the San Diego Comic Con Preview issue of Entertainment Weekly

One final new monster is actually a new take on the Frankenstein monster and it is known as The Kindred. The Kindred was actually shown in some of the Season 2 teaser footage, and because of it we know the Kindred is actually a monster Ichabod and Abbie summon in order to fight the Horsemen of Death and save Katrina. Though as with all meddlings in dark forces, this dark alley of good might not be all he’s cracked up to be. 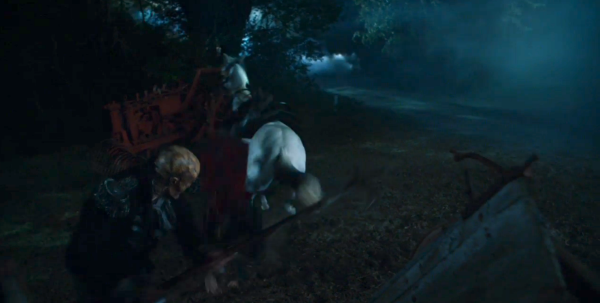 The Kindred saves Ichabod and Abbie

The Kindred rises to fight Death

This season is going to not only test; but explain a lot of the relationships we started to see last season. For starters, Katrina and the Headless Horsemen will actually form an interesting relationship. He might be the embodiment of evil and death; but he does actually love Katrina. Also, Season 2 footage seems to be showing Death in his original form of ‘Abraham’ – Ichabod’s best friend and Katrina’s fiancé – at certain points. How this is achieved, we’ll have to wait and see. Perhaps it’s a spell by Katrina to make him only ‘appear’ whole.

Ichabod and Katrina’s relationship will also be expanded upon as well as we get to see just how much these two love each other and why. Katia Winter, who plays Katrina Crane, joked that people might hate her Season 2 because she’ll crush any hopes of a Ichabod-Abbie relationship. Though you have to realize Ichabod-Abbie shouldn’t be a romantic relationship because it undercuts what Abbie stands for.

In most shows a woman is partly defined by her relationships with other men – especially the main character. That has never been the case with Abbie as Nicole Beharie pointed out at San Diego Comic Con. Whether with Crane, the creeper Andy, or ex-boyfriend Luke, Abbie never needed to be defined by her relationship with a man. Sure Ichabod and Abbie make a great team; but it’s great to show that this duo can be a team without it having to lead to romance. It leads to a deeper relationship that isn’t just another ‘run-of-the-mill’/’lets be like every other show’ outcome. Though these two are definitely going to have some hurdles to cross since Ichabod broke Abbie’s trust last season when he drew the map to Purgatory.

Though Abbie might just find herself in a full on relationship herself with newcomer Nick Hawley. Thus far we know that he and Ichabod – even though they compliment each other well – are very different. Hawley isn’t really out for the greater world’s good; but rather just for himself and those near to him. It’ll be interesting to see how this plays out as well as if it’ll last.

The final relationship that we’ll see expanded upon is that of Henry Parish, whom we now know as Jeremy Crane aka the Horsemen of War. Up until now, revenge has been the thing driving Jeremy in all that he’s done; but now he has it. So what’s left to do, but actually take on his Horsemen duties and start sewing seeds of doubt and discord within the town of Sleepy Hollow. Though in a shocking twist, Kutzman and Orci reveal that there may be steps towards redemption in his future. As for whether or not this redemption will be fulfilled, we’ll have to wait for this season to discover the answer towards that because if one thing is true about this show: you won’t see the end coming.

Contrary to his character, Orlando Jones is quite hilarious

Unlike other ‘man out of time’ shows, Sleepy Hollow isn’t just about a man trying to fit in to the new time. Instead, he uses his time and views to look upon the present and see the fruits of his labor – improved racial equality, etc – while also being discourage by other things – high taxes, overwhelming liberty in the phrase ‘right to bear arms’, etc. It’s partly due to this depth and originality that we love this show so much.

Though if there had to be another reason – besides the amazingly talented actors – it’d be the surprising revelations that await us. Kutzman and Orci said they followed along with viewers in Season 1 and took note of all their reactions to the misdirects and surprising twists. They loved how much we loved getting surprised; and promise there’s more to come in Season 2. These won’t just be haphazardly thrown in plot twists; but rather carefully thought out twists that when you look back will say ‘Oh, that makes sense’.

I can’t wait for the new season, especially now that it’ll have 18 episodes divided into 11 for the Fall and then another 7 in January. There promises to be a midseason cliffhanger as well as some new big characters in Season 2.5, so stay tuned here for more Sleepy Hollow discussions as the Season begins September 22. Until then, check out some highlights from Sleepy Hollow‘s SDCC presence. 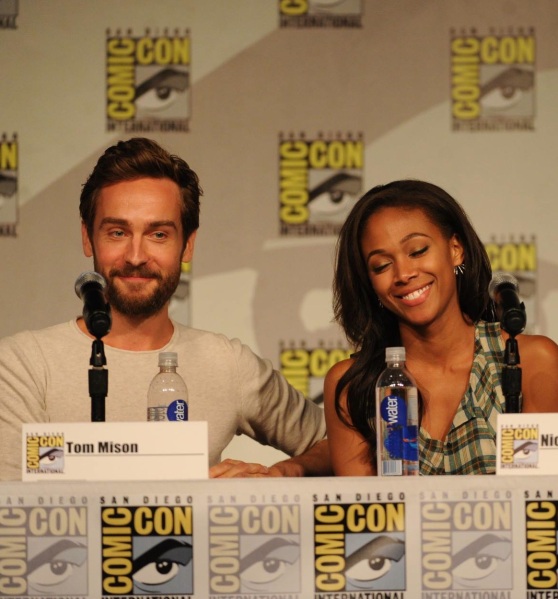 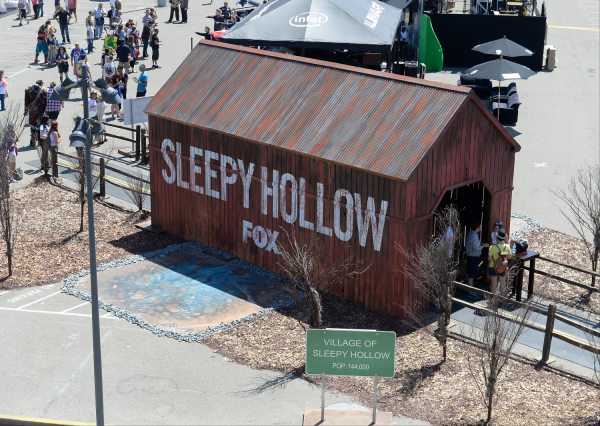 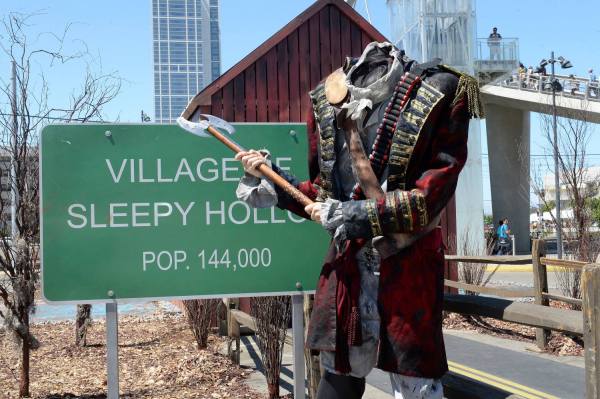 A population of 144,000 is biblically significant to the End of the World as the chosen number of those saved.

One thought on “Sleepy Hollow – Revelations of Season 2”