After a well-deserved summer hiatus, Marvel’s Agents of S.H.I.E.L.D – the show that went from mediocre to brilliant in a half season – is back!. In the wake of S.H.I.E.L.D.’s collapse and subsequent rebuilding by – now – Director Coulson, the team must find their place in this new world; but “what will they become” to do it. Character’s will rise and fall this season, and this episode was VERY packed – perhaps too much – so let’s break it down and take a closer look at the episode “Shadows”.

As the episode opened, we saw how Agent Carter and the SSR (Strategic Scientific Reserve) captured the first 0-8-4 (item of unknown origin) and seemingly put an end to Hydra’s last base of operations. Fast forward to the present day; and we know that this is sadly not the case. Though this opening did a lot more than just offer a stark contrast to the present day where even though Red Skull is long gone, Hydra is alive and doing very well.

This flash back beginning helped remind viewers of Agent Peggy Carter, Captain America’s best gal and one of the founding badasses of S.H.I.E.L.D. – or SSR as it was known then. We’ll see more of Peggy’s missions and awesomeness when Agent Carter airs during Agents of S.H.I.E.L.D.’s winter hiatus.

Though real purpose of this set up wasn’t for another series or this episode; but rather for this season as a whole. The man we met at the start of the episode who got the 0-8-4 stolen just as he received it was the very same man we met at the end of the episode, Daniel Whitehall aka The Kraken. So how can a man from 1945 survive relatively un-aged? 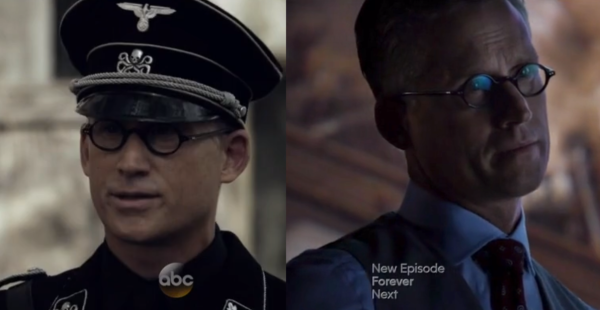 In the comics, various characters survive from the WWII Era basically unaged – Nick Fury, Baron Von Strucker, etc – ; but whereas those characters haven’t really maintained that aspect of their character histories – as far as we know – it appears as though Whitehall has gained it. As you can imagine, the Kraken is sort of a legend in the ranks of Hydra – literally though. He’s a ghost story, much like the Winter Soldier. When his assistant spoke of keeping things ‘discreet’, this was a reference to Whitehall’s status as such a story.

As I’ve said in previous updates, Whitehall is a master manipulator and also occasionally has a suit of armor. What his master plan is remains unknown; but he will be the big bad this season and it seems as though there will be plenty for him to manipulate.

With this episode dealing mainly with the race to steal back the original 0-8-4 (a miniature silver obelisk that appears to hold the ‘answers to death’) you can see another reason why this ‘intro portion’ was important. Though most 0-8-4s of the past never got a special ‘set up’ flashback, so why this one? It could be because it was the first; or maybe because it was already slightly known of. On the other hand, maybe it has something to do with another S.H.I.E.L.D. mystery.

Admit it, you missed this

In a blink and you’ll miss it moment, when Hartley touched the obelisk and it was fusing into her arm, Skye saw the obelisk momentary display a pattern similar to the one Coulson had her researching. We don’t yet know why Coulson and Garrett were writing these runes or what they mean; but now we know there is a connection to this 0-8-4.

Well General Talbot is back and is just as much of a dick as ever. Despite all his claims to finish hunting down S.H.I.E.L.D. and Hydra to the point of extinction, he has only been focusing on the remnants of S.H.I.E.L.D. and presumes Hydra to be already dead. This narrow mindedness has not only been a waste of resources; but also has allowed Hydra to flourish under ground. Despite Red Skull being defeated decades ago, its sad that his legacy seems to have actually outlived that of those who put him away. With Coulson having to fly Economy class just to scrape up some trustworthy members for S.H.I.E.L.D., Hydra has the clear advantage right now.

Beyond their incredible numbers, we learn that Hydra was actually taking S.H.I.E.L.D. items before the events of Captain America: The Winter Soldier. The prime example in this episode was when it was revealed that Garrett had marked Carl (Crusher) Creel –aka Absorbing Man – as dead when in fact he had been freed and under the employment of Hydra. Carl was on the original ‘index’ of people with powers; but was deemed too powerful to control.

Turns out that Hydra actually did find a way to control him by rewarding him with rare gems. As his name might suggest, Carl can alter his body structure to mimic whatever he touches. Though this doesn’t only give him a physical advantage; but actually gives him a sort of ‘high’. This is how Hydra is able to keep him in their services. In the comics Carl’s even absorbed Thor’s hammer Mjolnir once, so I wouldn’t be surprised if something like that happened – or at least rewarded with a piece of Vibranium.

What Will They Become?

The big theme this season is “What will they become”, which mirrors what Raina asked Garrett at the end of last season – “What will I become”. Whether it’s the consequences of Season 1, the presence of GH-325 in their blood or something more, each character will have their own journey to take. This is where we’ll sum up who’s changed over the past few months. 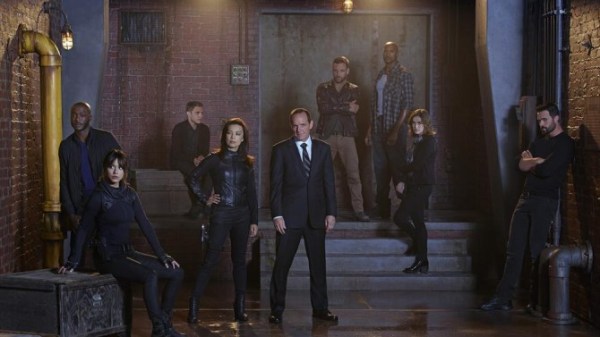 Coulson has been busy outrunning Talbot and trying to recruit new members for S.H.I.E.L.D.; but overall he seems unchanged personally. Though there is reason to suspect that he is conscious that something is happening with him mentally. Agent May said that their arrangement was for him to check in with her every few days so there is still that level of ‘how will he cope with coming back to life’. Now this could just be circumstantial and May is worried in more of a ‘you’re now the Director of S.H.I.E.L.D.’ context; but look at Coulson’s interaction with Skye.

The two used to be inseparable – like Father and daughter – and now Coulson has been MIA and hasn’t really allowed Skye that much one on one time. Is he withdrawing from everyone or just her? Whatever is slowly happening with Coulson, it’s a good thing that Agent May has remained so stable and unwavering.

May might still be looking after Coulson; but she has taken on a pupil in Skye. With Melinda May training her, Skye now has the brawn to match the brains. Though besides Skye’s increased badassery, there could be signs of manipulation in her future. Last season, Raina told Ward that Skye would become a monster and if he just waited, they could be monsters together. This is the approach Ward seems to have taken in his interrogation.

May pointed out that Ward will try to mess with Skye’s head; and he will. He selfishly wants Raina’s words to come through; and seems to working to get Skye to change. This will start by gaining her trust – whether being honest or trying to elicit sympathy with more sob stories – ; and with Coulson seeming a little more detached from her, Ward’s plan might work. Add in Ward’s “knowledge” of Skye’s father and Dr Whitehall’s affinity for manipulation, and we can be sure someone is going to get to Skye this season. 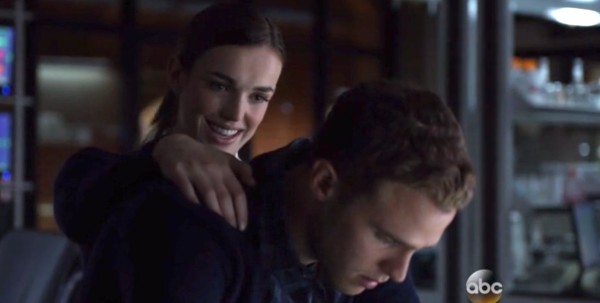 When we first saw Simmons trying to talk to a ‘vacant and distant’ Fitz, it seemed as though the oxygen deprivation took effect and Fitz was severely brain damaged. Thankfully he was just wearing ear buds and couldn’t hear her; but something still didn’t seem right. Fitz was forgetful and a little more apprehensive sure; but something didn’t make sense about Simmons. Why did she seem exactly like how we left her – same clothes and all – and why was not one ever addressing her?

The sad truth was revealed at the end by Coulson that the ‘Simmons’ we were seeing was just a figment of Fitz’s imagination. He suffered tremendous brain damage and just tinkers meaninglessly. Thinking it might help Fitz, Simmons left him a few months ago; but it only served to break Fitz further. Why would Simmons leave? Perhaps she couldn’t handle the guilt that Fitz sacrificing himself for her and seeing him like that was too painful. Whatever happened and whatever became of Simmons remains to be seen. All we can say is, this all hit us right in the feels. 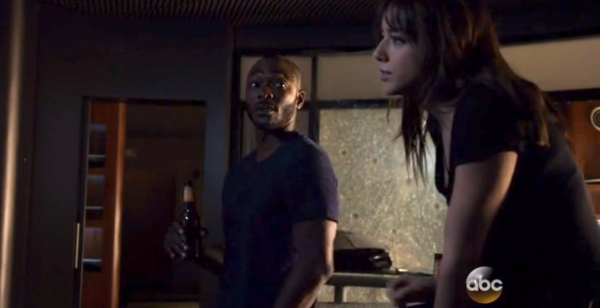 Considering we just started getting to know Agent Triplett towards the end of last season, we didn’t really expect him to show too much change at the start of this season. Though to be honest, why would we want him to change? Triplett is still just as funny and smooth as he was when we last saw him – maybe more so. Triplett has done what we always wanted from Ward, depth, and this Season premiere showed it. He isn’t just a ‘specialist’ to kick butt; but a jack-of-all-trades who can act as well as he fights.

Also, kudos for Triplett for pointing out what we’ve been wondering all along – that something is seriously wrong with Koenig. Koenig keeps talking about having more and more brothers; and it’s a little unsettling. Clone? Life model decoys? Who knows?

Blue Arm in a Box?

Turns out the 084 runes weren’t the only ‘blink and you’ll miss’ moment of the episode. During the Agent Carter intro, we see Dum Dum Doogan start to open a box that Peggy immediately closes back up. Though one impressive fan caught a snap shot of that moment so we could get a closer look; and what we saw was simply astounding: a blue arm with stitching. Hmm, what could have a blue arm and be in disrepair? Could it be T.A.H.I.T.I.?

This looks strikingly similar and could explain the origin behind the blue alien GH-325 was derived from. Further more, if those are runes on its arm – like the one the Obelisk showed and Garrett/Coulson were drawing – then this would all connect to a common origin. We’ve yet to have confirmation on anything; but it’s a very safe bet that the alien in question is in fact Kree – much like Ronan the Accuser in Guardians of the Galaxy.

I’m sad that Hartley (Lucy Lawless) died this quickly; but then again this is Marvel so you never know. Either way, it seems as though her son – IF the surviving guy in the vehicle did say mom earlier – might become a season regular this time around, which is awesome since I heard him mention “Budapest”. I’m curious to see where this will go as well as who else might join the team. Now with a Quinjet’s stealth capabilities at their disposal, Coulson and his team might be able to finally start making a comeback.