So you’re going to your first New York Comic Con. Congratulations! So what are you going to see? What will you do? Where do you go? If you think you can just blindly wing this then . . . Oh honey, you’re in for a rude awakening. With well over 120,000 people each year, New York Comic Con is nothing to be underestimated. Though with a little planning and insider knowledge, there will nothing standing in your way of an amazing time! So let’s begin; and may the odds be ever in your favor!

There are two different entrances for New York Comic Con. So before you wait on a line you don’t have to, it’s best to know your options:

As for leaving, you can exit wherever you like; however there is one important thing to keep in mind for entering and leaving the convention hall, Tap your badge. Tap-in and Tap-out, it’s that simple.

Yes, even at Comic Con, there’s an App for that. You can download the Official NYCC App from www.NYCCMobile.com and use it to view/ keep track of what you want to do each day. Though I really suggest you open/load up the App before you get to the Javits Center because as I’m about to explain, service is awful.

What happens when you have close to 100,000 people in the same place all trying to access their phones? Human sacrifice, dogs and cats living together… Mass Hysteria! So instead of this, you can save a lot of time, headaches, and battery life by just trying to get all ‘interweb’ info before you get anywhere near the Javits. Now the Javits does offer WiFi that you can purchase for $8 ($23 for 3 days, $29 for all 4); but I personally have never used it. Again, I try to get everything that requires internet done before hand.

Though whether searching the web, trying to locate friends with barrages of texts/calls and the tons of photos you’re going to be taking, you’re going to burn through a lot of your battery life. So bring your chargers. Actually, better yet, bring a portable charger battery if you have one. They’re only like $20 and are a very worthwhile investment when the alternative is finding every available outlet is already taken. It’s NYCC, so just assume there’s a line for everything.

HAHAHAHAHAHHAHAHAHAHA Oh, you’re serious aren’t you? Yah, as I just said, “assume there’s a line for everything”; and ATMs have some of the worst lines of the entire con. So please just stop at an ATM before you arrive. Trust me, it’s New York City. There’s almost as many ATMs as there are Starbucks.

If there is one bit of advice I wish I listened to when I first went back in 2012, it’s to “bring water and a snack”. Seriously though! If you think Wifi, electrical outlets and ATMs are in short supply, just imagine what it’s like when close to 100,000 people start feeling thirsty or hungry. More crazy lines!

Now of course you could just leave the Javits and go to one of the food carts outside – the quality of food sadly ain’t that different – but just remember that they know you’ll become hungry and thirsty. So bring a bottle of water and a energy bar or something. It’s not you being cheap. It’s you being smart and not paying literally insane prices for a simple bottle of water.

One final option is to remember you’re not bound to the Javits Center. Walk a few blocks away from the madness to grab a bite to eat/drink. Treat yourself to a nice calm lunch; and then head back when you’re recharged and ready to take on the day!

There’s so much to see and so much to do. Of course you’d want to do it all; but sadly, that’s impossible. You need to have a realistic schedule of what to do what days. Whether you have a 4 Day Pass or a Day Pass, you should know what is happening and who is visiting what day at what time. 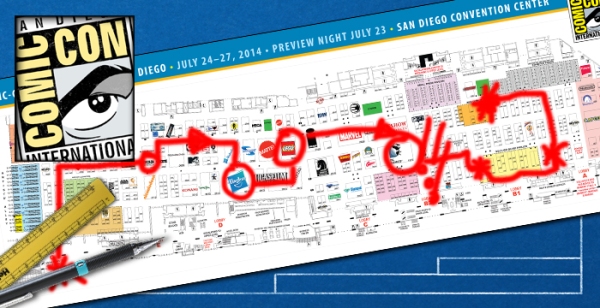 Further more, realize autograph and photo ops are a mad house compared to ‘booth’ autograph signings. Yes, there is a difference. The Autograph/ Photo Op area is downstairs and it is an absolute mad house and you need to realize that. For example, if Jason David Frank – Tommy the original Green/White Power Ranger – is signing autographs from 1 to 3pm, DO NOT show up at 2:45 and expect to snag one. Stan Lee, Hulk Hogan, John Barrowman, etc., these are people with incredibly ridiculous lines. So make sure you get there with ample time if you desire an autograph.

The same goes for Panels. Wherever you are in the Javits Center expect lines and heavy foot traffic. What could usually be a 2 minute walk becomes closer to 10. So factor that in and don’t take on more than you can handle. Further more, save some time for just general exploring.

Beyond the panels and autographing, there are a ton of vendors between the Show Floor and Artist Alley. Be sure to save time for these options because you could get some really great sales. Though with some items, realize they can be found else where. Say for example you find this really cool Batman bobble head. Well, there could very easily be that same bobble head in another booth for cheaper.

What you really want to aim for is some of the specific booths that have their own unique products. Also, some booths have autograph signings of their own, so always stay on the lookout for things. As for Artist Alley, it’s a great opportunity to get some exclusive artwork; and some artists even take requests. So remember to definitely spare some time to explore.

Remember that everyone here is in the same boat you are. People might get a little irritable here and there; but everyone is here for a good time. So just remember to be respectful. Whether its to other attendees, cosplayers or the stars themselves, remember to always be kind and courteous to those around you – especially in lines.

9. Waiting In Lines & How To Survive Them:

As I’ve been saying, there’s lines everywhere at Comic Con. Some might b a waste of time; but others are a necessity. So whichever you find yourself on, make the best of it. Remember that you are surrounded by people just like you, so make some friends. Talk about your favorite shows. If you can do this, then an hour of line waiting can go by in a flash.

Most importantly, just have fun. Don’t get stressed about missing out on something. Just move on to the next one. There’s literally tons to do and awesome new people to meet. Come casually or cosplay as your favorite character. This weekend is what you make it; and if you approach it with an open mind full of adventure, then you will have the time of your life.