This week’s Agents of S.H.I.E.L.D. gave us suspense, awesome new characters and answers to a lot of question. Though more than just that, it gave us some new we’ve been waiting for since this summer. So let’s break apart this episode and learn about all the awesome stuff that happened and will be happening in the coming weeks.

Considering how much Hunter was talking about his ice queen of an ex, we knew she’d be introduced eventually; but we never expected her to be the awesome Bobbie Morse aka Mockingbird. In the comics, she’s usually a blonde; but Bobbi was so spectacular this episode that it doesn’t even matter. We should have known Coulson wouldn’t have sent Jemma undercover with no backup/exit strategy; and there’s none better than Mockingbird.

Highly trained and an excellent actor, she was the perfect one for the part – and Adrianne Palicki was the perfect actress to bring her to life. I’m so glad that she’s staying on and I hope it’s a permanent one. You can never have too many kick ass women, and an Agent May / Mockingbird team up would just be spectacular. It wasn’t made clear whether or not it was Bobbi or Jemma who planted those encoded files in that Hydra scientiest’s desk; but Bobbi did manage to take all of Jemma’s files off of her computer all under the pretense of ‘finding the mole’.

Due to the passage of time, it seems as though Coulson called in the extraction the moment Raina threatened Simmons over the phone. While Coulson was sitting down to dinner with her, he already knew the extraction was well under way and Jemma would be safe in Bobbi’s hands.

Among other things, Hydra’s main goal for the Obelisk is to weaponize it on the grand scale. The episode opened with their initial attempt to test a reverse engineered version of it on a group of unsuspecting wedding guests – some of whom were members of an anti-hydra unite – but it turned out to not be AS deadly as they had hoped, killing only 8 of the guests. Though by episode’s end, it looks like they might gain a lot more from the obelisk than just a new weapon considering their new partner.

The Death That Follows Her – Skye’s Father:

This episode offered us the most comprehensive look at Skye’s mysterious father to date; and he is just as crazy as we expected him to be. We see that he works as an underground doctor of sorts for the criminal type; but it is his rage that is most telling. Raina keeps mentioning how he could lose control again and has to “hold himself together”. 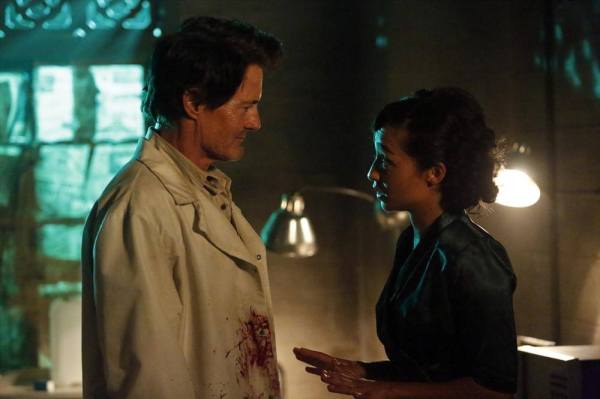 I know I’m not the first to suggest this – nor the last – but I’m definitely suspecting that he’s a Skrull. From the enhanced strength and constant green lighting that accompanies his scenes, the shape-shifting Skrulls just seem like a plausible choice – especially knowing their war with the Kree – blue alien in the Guest House. Whatever he is, we learned that both Skye and the Obelisk go by different names. While Skye’s is unknown, the Obelisk is called the Diviner.

The search for Skye’s father will continue; but this time knowing that he isn’t the ‘Father of the Year’ Raina initially made him out to be. Even before they saw the eviscerated bodies, Raina’s fear of him gave him away as not the kindest of souls. Now with him working with Hydra, it looks like all the “Monsters” are now on the same side.

With Coulson keeping so many secrets from Skye this season, it looked as though the loss of this ‘father figure’ would drive her to her monstrous real father. Although in perfect balance, this episode showcased the reestablishing of Coulson and Skye’s father-daughter relationship while also cementing her aversion to her own father.

There were tons of iffy foreshadowings, such as when May said “Keeping her in the dark wont end well”; but this all proved to be a warning rather than foreshadowing as none of this came to pass. After talking with Ward, Skye realized that Coulson must be suffering the same side effects Garret was. Coulson decides to come clean about everything, even the surveillance of Skye to see if she’d follow in their footsteps.

The markings weren’t given to Skye soley to decode; but also to see if they’d spark the same crave for writing they did in Coulson. With no reaction to date, Coulson now believes that Skye might be alien; but that’s only a theory. Though the most important theory of the carvings comes from Skye at the end when she realizes the carvings might not be language but rather a map.

With Raina now tagged, Coulson and the crew might be able to find her when Whitehall picks her up. Additionally, it seems like Ward might be back in action next week continuing the possible path of redemption for him. Throw in some sure to be ‘full of feels’ FitzSimmons moments and it’s going to be another good one. Though that isn’t what’s most exciting about next week’s episode.

The review of next week’s episode “A Fractured House” will take second tier importance to the release of the FIRST Avengers: Age of Ultron trailer. We’ve been researching and covering it for months; but now we will finally have a trailer to watch, dissect and geek out over. So stay tuned for next week! It’s going to be MARVELous