Last night’s episode of The Walking Dead did a fantastic job of not only offering us powerful backstory; but also drove the plot forward as startling new revelations were learned. Surprisingly this episode was almost pulled by the censors, which is crazy considering what happened in prior episodes. Regardless, we’re thankful it aired so that we can now take a closer look at “Self Help”.

A crew just left and already there are signs of regret about leaving too soon. From initial votes to head back to the Church to regroup after the bus flips to Maggie admitting later that she feels guilty that they left the others so quickly, there are definite doubts about their current course of action. Though despite these doubts, they promised Abraham that they’d push on with him; but with each new obstacle, the lack of faith grows more and more.

After each obstacle – bus flip, needing supplies, fire truck not working, etc – someone steps up and questions Abraham’s mindset. Glen is the first to step up and later Rosita follows suit. She points out that maybe the reason they keep running into trouble is because they never leave at 100%. Despite the valid claims of both, they give up and decide to support Abraham in hope that his drive will be rewarded in the end; but appeasement can only go so far. 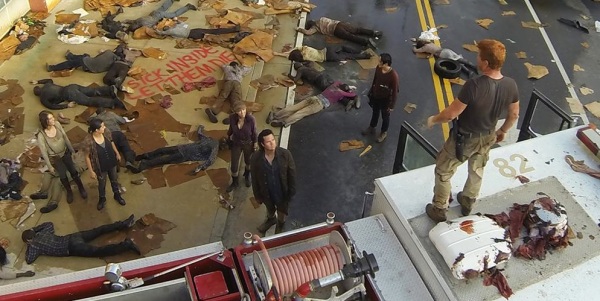 As they continue on, Abraham is getting more and more unhinged, especially when he starts cracking up after the fire truck fight. If they’d actually took a second to look around, they’d have seen the sign painted on the ground: “Sick inside, let them die”. All Abraham can do is laugh and say how screwed up it is; but no one knows what he’s referring to. Is he talking about the missed message or how these people just wanted to leave the walkers trapped because they were ‘sick’?

The tension has been building this whole episode until the ultimate breaking point, the Walker Ranch. Despite the enormous mega herd of walkers – as far as the eye can see – and their fire truck showing more and more wear, Abraham decides to push on through the herd. Again Glenn and Rosita step up with very valid points about how they should head back and find a new way around; but Abraham won’t truly listen to them. He knows they’re right; but he feels if he hesitates they’ll die. He’s seen how hesitating has lead to run ins with dangerous people in the past, and now he refuses to wait at all. He’s just about to drag Eugene through the herd on foot until a shocking – or not so shocking – truth is revealed.

If you read the comics – or have a finely tuned BS Detector – then you were waiting for Eugene to finally crack and admit that he wasn’t a scientist. I mean think of the alternative: there’s a cure, show ends. Who wants that? Well Abraham and everyone else stuck in this hellish post apocalyptic world probably did. In a way, I guess Bob died at the right time – with hope for the future – because everyone is going to suffer some repercussions from Eugene’s instance of “Self Help”.

That’s right, the episode title didn’t just refer to the section Eugene was watching Abraham and Rosita have sex. “Self Help” also refers to Eugene’s whole lie boiling down to nothing more than a survival method for himself. We can see from the flashback that he’s not the most physically gifted. I mean for God’s sake, a walker with a backpack tied around its leg was about to outrun him! Though whatever his shortcomings, you have to wonder if his lie was excusable or not.

Wow, I haven’t driving that bad since Lori in Season 2!

Considering the awful means of survival we’ve seen thus far this season – cannibalism – a lie doesn’t seem to bad in order to make yourself seem important; but when it gets people killed then things start to get serious. At this point in the story, continuing the lie was more dangerous than the lie itself. Eugene might not be able to save the world, but he can offer a group a lot of technical advantages in fixing things/making something out of nothing.

It was this episode where he started to learn that he can be of use to a group even if he doesn’t have a cure. It is because of this revelation – and the massive herd of walkers he was about to be dragged through – that he finally decided to come clean. Chris Hardwick on last night’s Talking Dead made a brilliant comparison between Eugene and Abraham to Michonne and her pet walkers. Both were protected by their ‘pets’ fearsome nature and instead of physical leashes, Eugene kept Abraham at bay with his lie. It’s also important to note that Eugene came across Abraham right as he was about to kill himself. This was the mental state that not only allowed Abraham to be so easily controlled; but also caused him beat Eugene senseless in the end.

We knew that this season would play with time a little bit, and that is exactly what happened in this episode as we got small fractured snippets of Abraham’s past mixed into the present. In the flashbacks we see how Abraham beats 4 men to death right in front of his family, which scares them away and basically sends them to their death. What we don’t see in the flashbacks is what happened prior to this.

Abraham is of course a military man and had set up shelter with his family and some of his friends and neighbors. While out on a run one day, Abraham returned to find his family had been raped by those he had called friends. The shock pushed Abraham over the edge, which caused him to basically go beast mode and bludgeon them with one of the cans of beans he had just returned with. His family had never seen the ‘soldier’ side of him before which scared them away and ultimately got them eaten. 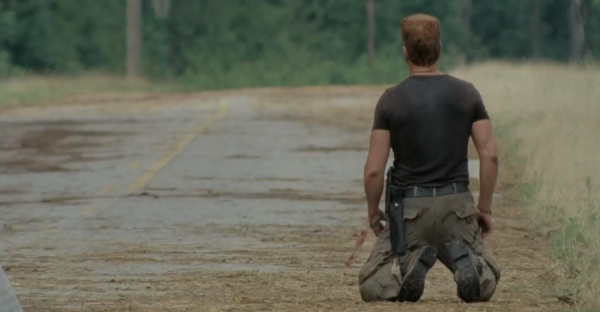 Abraham was just about to kill himself when Eugene found him. So this whole mission to ‘Go To Washington & Save The World’ was in a sense Abraham’s atonement. If he could complete this mission, he could make his family proud of him and honor their memories. When the episode closes with Abraham’s fists all bloodied and him collapsing on the road, this is a direct parallel to him in the flashbacks after he found his family slaughtered. He has lost his reason to live and he’s completely forlorn . . . but is he really?

Unlike last time, Abraham has seen good people. He knows there’s those out there who are willing to fight and die for what they believe in. This time around Abraham isn’t completely alone regardless of what this crushing revelation has done to his spirit right now. In many ways, Abraham went Season 2 Rick after Lori’s death… and you should never go Season 2 Rick After Lori’s Death! Though much like Rick – and even Tyreese – I’m confident Abraham will pull himself together and come out of this even stronger than before.

Killing Vs Putting Down:

Besides playing with time, we also know that this Season is going to explore how our heroes time at Terminus and all their recent run ins affect them. Well you might have missed it; but there was already signs of a repercussion in this episode. As I already mentioned, Abraham now has this built in fear that ‘stopping to rest’ ultimately leads to a group of people trying to hurt you. Terminus almost got them twice and now they’ve kind of been conditioned to never feel safe.

Though there is a much more direct repercussion that we can see from the episode “Four Walls and a Roof”. Abraham was one of the people who completely beat the hell out of the remaining Termites – aka the Hunters – and in this episode we find him muttering how he can’t do that again. This might seem pretty out of place considering how badass we’ve seen Abraham be thus far; but each of those occurrences was against the walkers. His time at the church brought back all of his memories of the last time he savagely beat the living – which begins he set of flashbacks.

After he beats Eugene in the end, he has that look of recognition on his face that one again like at the Church, he has brutalized a living person. This is important to note how even in the end of the world, there is something about killing. Walkers aren’t alive, we know that; but to kill a living person – especially so personally and rage filled as Abraham did to the Hunter and almost to Eugene – is something else entirely. No matter how much time has passed in this new world, kill a living person is never something the good people enjoy; but rather it’s something they have to live with. 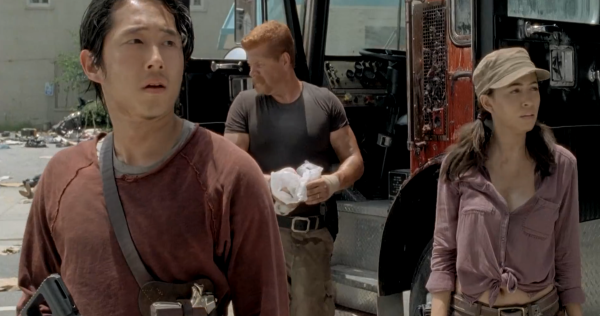 Much like with last Season, some might feel this season is starting to move too slow and there’s not enough gore and zombie killing. To that I say, you’re watching the wrong show!

The Walking Dead isn’t about killing hordes of zombies at a time like some video game or something. It’s a beautifully written show that is adapted from graphic novels that place the importance not on the dead but how the living survive and remain human. This is something that fans of this show should understand completely by now – regardless of whether or not they’ve read the original source material – ; and last night’s episode was a truly great one in terms of exploring more backstories and motivations.

As for next week’s episode, we’ll find out what happened to Carol and Daryl while they were on the trail for Beth. We can see Darryl carrying a ‘Beth sized’ body and placing it onto a fire in the preview, so I’m nervous what’s going to happen. Although considering the actor who plays newcomer Noah is supposed to be on Talking Dead next week, perhaps it’s him. Either way, he’ll be back and we get some more answers as we build up to the midseason finale.