With Ubisoft releasing not one but two Assassin’s Creed games this year, many feared the last gen exclusive Assassins Creed: Rogue might just be a lack-luster repackaged version of Assassins Creed IV: Black Flag so they could spend more time on the next gen Assassins Creed: Unity. Though with stunning visuals, an incredibly emotional story and the long awaited return of series favorite game mechanics, Assassins Creed: Rogue not only represents everything we love about this series; but also gives us an exciting new angle unlike anything we’ve seen before.

The Best Of Past Games:

Considering Assassins Creed: Rogue bridges the gap between Assassins Creed IV: Black Flag and Assassins Creed: III, it makes sense that naval exploration and tree running would play a large role in the game. Though these aren’t the only game game specific mechanics that return this time around. You’re on the open seas so you can of course resort to piracy and naval missions or you can invest your money in reconstructions that will make you money over time.

This system of building renovations hasn’t been implemented since Assassins Creed: Brotherhood. Sure you could fix up buildings in Black Flag but you never actually made any money from them. Ask anyone who played Assassins Creed II or Brotherood and they’ll agree that the renovations system was truly the best source of income for any AC games. In fact, things are even better this time around because you can fetch your income from the Captains Quarters on your ship – so no need to backtrack to this specific location. Though if you still wish, you can head to Shay’s Templar Base in New York, which brings back fond memories of Monteriggioni in Assassins Creed II with its rustic style.

If you thought Black Flag had a huge map, then you haven’t seen anything yet. The world map for Rogue is actually made up of three huge maps – The Northern Atlantic, The River Valley, and New York. There’s tons to do and each map holds its own feel. The River Valley has a lot of narrow channels as well as large bays, while the North Atlantic has much colder waters and ice bergs that are just as dangerous as you’d expect.

Though if you missed large cities in Black Flag, then Rogue will definitely make it up to you. Considering this game takes place before the massive New York fires, New York is a fully explorable plain that offers at least twice as much as it did in Assassins Creed III. With large churches and beautiful waterfront properties, this New York perfectly balances familiar with excitingly new venues.

A Change Of Perspective:

One thing that you have to understand about this game is that it’s NOT Templar’s Creed. It is still Assassin’s Creed and we will see Shay go from Assassin to Templar as well as what causes his transformation. Yes there is one huge event – which is handled so incredibly that you actually feel the horror of it right along with Shay – but even after this you will see Shay wonder if this new path works for him. He’ll have regrets and approach things as a ration human being. He’s not a cold-blooded killer or a villain. He is simply doing what he thinks is right and reacting to what’s happening around him.

With Shay of course now on the other team, you’ll of course experience how the other half lives. From Assassins stalking you – hinted at by the tell tale whispers of a multiplayer match – to intercepting Assassin contract pigeons and racing to save the intended target, this new spin on things keep all of these seemingly familiar aspects and makes them feel fresh and exciting.

From the moment you load up the game, you’ll get a taste of the beautiful and complex music for this game. Assassins Creed has always had an amazing soundtrack; but this one truly outdoes itself. Take a listen to the opening score below. It’s almost as though someone took the track “Ezio’s Family” from Assassins Creed II, mixed it with some of the most beautifully haunting Irish music you could find, and then added in the best sound bites from Assassins Creed III. It’s a fitting pairing due to Shay’s Assassins and Irish origins as well as this being the precursor to Assassins Creed III; and the entire game score is like this. God, I could just listen to this over and over again!

As with any Assassins Creed game there is a present day element; and whereas I won’t spoil too much, I will say that the general idea is very much like it was for Black Flag. Whether you’re the same worker or a different worker, totally up to your imagination because it can fit either way. There’s also more puzzles and collectibles to solve and find; but like the rest of this game, it’s all presented in a familiar and yet excitingly new manner. 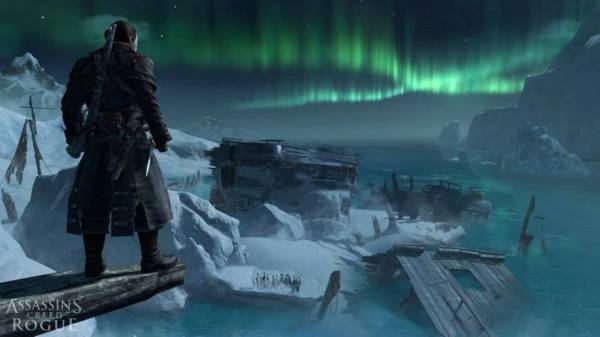 All in all, I give Assassins Creed: Rogue a perfect score. Sure there was a slight glitch when I first started playing that didn’t allow me to replay any missions just yet; but that was very quickly resolved. And hey, what release doesn’t have a glitch or two. All that matters is the final product; and this is one beautiful. So what if it’s last gen? Assassins Creed: Rogue perfectly brings together the past 7 years of Assassins Creed on PlayStation 3 into one final and brilliantly executed game.

What do you think of the game? Is there any part that you’re stuck on? Want some tips or tricks? Sound off in the comments below because I will be doing a bunch of articles for Tips & Tricks, How To’s and even Story Elements explained. So let me know and you could see one of your questions answered in the next article. See you next time; and may the Father of Understanding guide you!