As if our heroes weren’t divided enough as it is, this episode served to only divide them further. Though while the size of individual group were shrinking throughout this episode, the heart racing tension continued to build. With various twists and turns, it’s hard to know who will be safe, who’s going to break and who will fall. So let’s take a closer look at this week’s The Walking Dead “Crossed” as next week’s Mid Season Finale quickly approaches.

Before we continue, you must remember that even though it’s been a few episodes, everything in this episode takes place the day AFTER Bob died. The Termites/Hunters attacked at Night and the next day Bob died/Abraham’s group left. Darrryl returned later that night and all of this is happening the next day. So think of it like this: Church slaughter Sunday night, Bob died Monday, today’s Tuesday.

This is why the air of distrust is so strong in regards to how Father Gabriel looks at Rick and the group. He’s barely known them for 48 hours and they’re already ripping up his Church and spilling blood inside. Also, this is why Sasha has such rage in her heart and hasn’t let go of Bob yet. It’s barely even been 24 hours for her.

The Different Meanings of “Crossed”:

Thus far this season has slowly turned back into the second half of Season 4 with each character group getting their own episode; but this all changed with this episode titled “Crossed” as each characters story arcs begin to “cross” each other and we touch upon each characters current path. Though this is The Walking Dead, so you can be sure “Crossed” had plenty of other meanings.

There is also the obvious “faith” angle that we see with Father Gabriel and the literal image of a “cross”. Despite everything that has happened, he still sees Rick’s group as a bunch of bad people. He still hasn’t adjusted to this new world and so he flees; and it appears he stinks even at that. He could have just left normally. He’s no hostage like Beth; but he feels he must flee these “bad people” who have slaughtered inside his church. Gabriel is going to have to come to grips with things soon or else he’s not going to make it. After all, it’s a miracle he’s made it this far at all. He got close at the end; but seeing the walker wearing a “cross” around her neck once again made him back down.

Another meaning to the episode title is to point at disagreements between characters you’d never expect to disagree with one another previously: Rosita vs Abraham, Maggie vs Abraham, Darryl vs Rick. Most of these character have either usually always agreed on what’s supposed to happen while others have hardly interacted at all. Additionally, you can even see “Crossed” as an homage to fates being intertwined as Abraham isn’t able to snap out of it until Eugene starts to wake up. Whether either of these meanings, or even former plans – ie: Washington, Sneak Attack, etc – being crossed off a list as no longer plausible, “Crossed” is an incredibly simple yet all inclusive word to perfectly title and sum up this episode.

How To Mess Up A Rescue Mission – Tyreese & Sasha:

So you’re going on a dangerous rescue mission into hospital run by corrupt cops in what used to be the heart of Atlanta. Who do you take with you? Clearly your strongest remaining fighters with careful care to leave behind someone that can help defend the church. So why, WHYYYYYY do you leave behind your ace Stealth fighter and take along the new pacifist? Why Michonne would be left at the now fortified church and Tyreese was taken along makes absolutely no sense.

After everything that they’ve been through, Rick has the right idea about needing to be stealthy, fast and using the element of surprise against the Hospital Cops. Noah knows the good from the bad so they have their moral compass; but Noah also told them the atmosphere. He knows of how the residents only look out for number one, so when Tyreese offered up a ‘non violence’ alternative, we should have known it’d get insanely violent really fast. 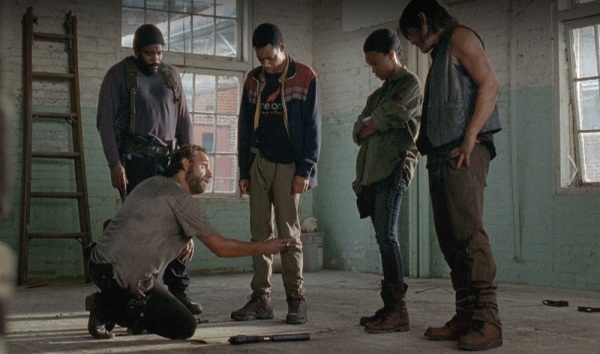 To make matters worse is the timing with him and Sasha. Tyreese and Sasha had a beautiful moment of clarity where she was able to put Bob behind her and see that Tyreese helping was indeed honoring Bob’s memory. If this had happened back at the church, it’d be a purely beautiful moment; but instead this happens right before Sasha is tasked with watching a cop also named Bob. After the moment she just had, she’s far too kind and leaves herself open to being manipulated by Bob #2. Now Bob #2 might not be completely bad – maybe just completely scared – but his release is sure to cause a lot of problems for the group. I know these choices were made for ‘story’; but the Team Division for this run just makes ZERO sense.

All The Real Cops Are Gone:

The minute we heard that Rick was going to lead an attack against the Hospital Cops, we knew the comparisons would begin. Whereas Rick is no longer in uniform, he has shown much more care for protecting people than the cops over at the Hospital. Though you have to remember these aren’t the honorable “protect and serve” cops; but rather a bunch of corrupt individuals that will only protect if THEY are served.

Noah differentiated between some being “one of the good ones”; but it’s hard to tell who’s good and who just has a deeper motive. Some of the captured cops might have told Rick one thing about Dawn; but is it really the truth. Are they forcing the matter to get Dawn out so they can reign supreme? We’ve seen a lot about Dawn thus far; but we still don’t know where she stands. Whether she gave Beth the key to save Carol or not is besides the point. She is always making horrible calls and then placing the blame on the ones who tried to stop it in the first place. When Beth was begging for Carol’s life, Dawn could have acted strong and sided; but she’s too weak and then told Beth that SHE (Beth) killed Carol.

At this stage in the game, Dawn has a lot of similarities with the Governor Round 2. We are seeing signs that she MIGHT be good and redeemable; but it’s covered by a lot of character flaws, abusiveness and passing the blame. Though even if giving Beth the key was a kind act, was it REALLY out of kindness. Dr Edwards warns Beth to the contrary; but then again can we really trust a Doctor that would kill others so he stays important?

GREATM – Making The Best Of Things:

Picking up immediately from where we left off in “Self Help”, we find Maggie tending to Eugene – who’s still unconscious – and Rosita trying to snap Abraham out of it – who’s still just staring off into the distance. With a heard of walkers behind them, no water remaining and the realization that their mission has been for nothing all setting in, the group splits up in order to get some supplies until Eugene can be moved. Of course we’d be fearful of something happening since Maggie and Glen are split up again; but instead we got a closer look at where these characters came from and are heading.

Sure Maggie stood up to Abraham – as well as cleverly covered/hide Eugene from the elements and any walkers – ; but we always knew she could handle herself. It was actually Rosita who took focus on this group of scenes as we learned about what kind of person she is. Resourceful and intelligent as she is beautiful, Rosita shows off just why Abraham asked her to join him when the first crossed paths in Dallas.

It’s Rosita more than anyone who defends Eugene’s actions. Sure he lied; but that was him just using his survival skill. Even though Glen feels that still reason to be mad at him, Rosita thinks differently. Though it’s not only her beliefs that help sway opinions of Eugene; but also what she reveals she learned from him. He is intelligent and taught her some of the survival skills she has now – filtering water, etc. She shows us that she isn’t only strong on her own; but is able a strong supporter for keeping group peace. She can assess people’s talents and knows Eugene will become ridiculously valuable in any future society they try to make due to his intelligence.

As for Abraham, it’s important to note that he only snaps out of it once he knows Eugene has awoken. This reveals that its not only the loss of a mission that he’s broken from; but also because he realizes he’s returned to where he was right before he met Eugene – alone after beating someone with his bare hands. Though this time he isn’t alone, he has friends and he’s seen good people. This is why he didn’t tell Maggie to shoot him – and end it all like last time. He’ll be fine, and now that Eugene is awake, Abraham will find his way to being a stronger leader.

It’s almost here! Next week is the midseason finale of The Walking Dead’s fifth season. With talk of there being a “special surprise cast member” appearing on next week’s Talking Dead, let the fears run wild with the thoughts of someone dying; but who? Carol did talk a lot about “going to hell” and dying last episode. So could it be here? Then again, perhaps no one dies; but Dawn joins and she’s the guest. I guess we’ll find out in less than a week.