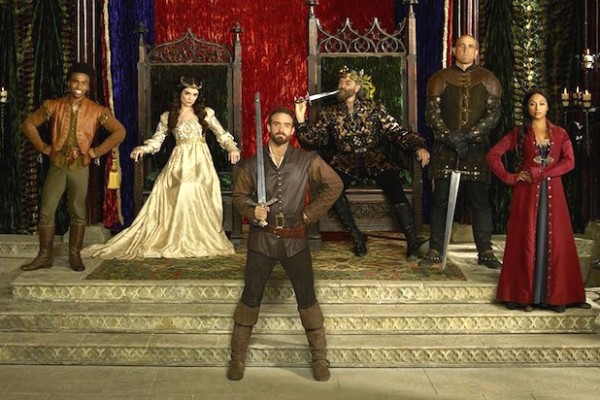 If you’ve ever watched and loved Mel Brooks, then Galavant is an absolute treat for you. On the other hand, if you like your fairytales untouched and disdain the intellect of satire, then this might not be the show for you. Then again, you would have known not to watch in the first place. Heck, the theme song flat out calls him a “fairytale cliché” from the start – not to mention the other commercial set to Meghan Trainor’s “All About That Bass” – so there shouldn’t have been any surprises on that end.

In fact, the night itself was all about satire as each commercial for an ABC show got its own tune in the style of the Galavant theme song. With catchy musical numbers and tons of jokes – both low humor and of deeper intellect -, Galavant showed itself to be the charming yet slightly raunchy fairytale satire we wanted from day one. So let’s take a look at Part 1 of this four-part extravaganza to see just how beautiful this show is.

Break You In Gently – Language & Set Up:

The opening segment for Galavant was basically the extended trailer we got for it a few months ago. The difference of course came when Madalena entered the intro song. The song was curiously reworked from its initial version to exclude any references to her “nymphomania” as well as how they would “you know what again”. Even as the song ended and we find King Richard telling Madalena that tonight they are going to “do it”, the word “sex” is withheld.

In another trailer for the series, King Richard ended with “I mean sex” to which Madalena responds “Got It” with an anxious and nauseated look upon her face. Why all these words were omitted and reworked around in the premier is beyond me especially since later on a word or two are completely censored – in fact, each episode has one word censored. Though oddly enough, the omission of these words cause the exchange to somehow get even funnier.

Richard: Then tonight, you will join me in bed.

Richard: We’re going to do it *kick snap*

Richard: And we’re not just going to sit in bed, open gifts, and talk about how much fun waiting was. We’re doing it! My lady *starts to walk away but comes back* … and of course we’re going to open some presents but then we’re going to do it”

Madalena: GOT IT! *nauseated look*

Seeing Richard constantly bringing up this uneasy subject is not only hilarious; but also a great set up for his character in the main portion of the show. He isn’t the powerful or forceful king; but rather the king who just doesn’t get it – in more ways than one.

As I already started discussing, King Richard isn’t the usual evil, manipulative and oppressively cruel ruler you’d expect from the ‘bad guy’ in a fairytale. Sure he kidnapped Madalena; but as we see she is much more in control than he. She is not only verbally abusive and belittling; but also openly cheats on him with the Court Jester – and who knows who else. He might be the all-powerful king; but he is completely blind to the situation at hand while Gareth and the Cook can clearly see the truth of the matter – which is similar to how Isabella and Sid can see through Galavant’s delusions of Madalena as well.

It is Madalena that is truly the evil and vicious villain of the series as the plot progresses. She recalls how when younger, her parents made her eat her own pet because they were starving, which made her decide to never be put in such a position again. A troubling backstory to be sure; but we see her go above and beyond what anyone could possibly need as it is her who decided to decimate Valencia in hopes to obtaining its riches and its priceless gem.

From her fair complexion and boundless beauty, Madalena fits the bill of fairytale princess; but it is actually Princess Isabella Lucia Maria Elizabeth of Valenica who is protagonist princess. It’s not only refreshing to see a recurring non-white princess on ABC. Once Upon A Time had one for an episode; but even then she was a damsel in distress at most. Here Isabella is neither a damsel nor in distress as she is revealed to not only be playing Galavant to save her parents; but also an expert fighter and swordswoman as she trains and defeats Galavant. Isabella both falls into and breaks the mold as a stunning beautiful princess who is an absolute badass.

Even the incredibly handsome and charming Galavant himself – who is the physical embodiment of a “fairytale cliché” – breaks the usual mold of hero. I’m not referring to his lack of manners and bad smell when find him after he’s been dumped; but more importantly when he tells of his backstory. Rather than fall in love and seek a bride – as most boys did when he was younger – he studied, trained and worked to better himself. He saw how love drove his parents crazy and decided to focus upon other things. Sure love eventually struck him – as it does in all of us – but Galavant’s admission that it wasn’t the only thing and he’d rather work to better himself and those around him is a level of self-awareness most fairytales leave out.

“A Fairytale Cliché” – Everybody Sing:

Speaking of self-awareness, Galavant is at its heart a satire of all the fairytale clichés we’ve ever heard. So in being that, it must also acknowledge itself as a fairytale and own up to the greatest staple of any Disney “fairytales”, the musical number. The only other time someone has made reference to this was in Disney’s Tangled when Flynn asked “Why is everyone singing?”. Well Galavant won’t ask why everyone is singing; but rather command you to sing along. Though it’s not just when Gareth commands everyone in the castle to sing with the king; but also when Galavant himself learns that he can’t like he used to.

Galavant is talking about singing here as if it’s something one trains for alongside swordplay and horse riding. He’s not only physically out of shape, but also vocally out of shape. Though one of the greatest songs has to be towards the end of “Joust Friends” when we have Isabella & Galavant and Madalena & Richard all singing “Maybe You’re Not The Worst Thing Ever” to one another. Rather than sing of each others beauty and virtues – as usual fairytales would have you believe – the four go one to compare each other to crabs, scurvy, lice, the plague and various other hideous diseases. Though even if their spouse/new romantic interest is that bad, perhaps they “shouldn’t quite say never”.

Another great satirical moment within the songs of Galavant is how sinister lines are actually heard by everyone. Sometimes in songs you’ll have someone slyly insult someone or reveal their plan and wonder why no one else heard that. In Galavant, everyone hears everything as we not only see when Isabella sings about ‘working for the King’; but also when the King is singing and casually mentions causing a mass genocide once Galavant is gone. Both instances immediately lead to those around them asking, “Wait, What?” in disbelief before the singer in question quickly covers their tracks.

When it is revealed that Isabella is actually working for King Richard, it not only adds depth to her dynamic with Galavant; but also progresses King Richard’s character as well. Initially the ‘king who just doesn’t get it’, he begins to stand on his two feet and enact a bigger plan instead of succumbing to Madalena’s passing insults and comparisons to Galavant.

Again, Isabella isn’t a damsel in distress, yet her lie does force her to assume the role of one in a way. This is where playing upon common fairytale stereotypes comes into play most. Though these twists slowly come undone by time episode 2 roles around and we see her and Galavant literally falling for each other. She wants to tell him about the lie – and we can almost guarantee that they’ll get closer, she’ll tell him, they’ll fight but then get back together and save the day with a new plan – but this little initial deception has already added far more plot than the run of the mill ‘hero saves damsel’ story.

The Deeper Meaning Of Fairytales:

Though the true point of Galavant as a satire isn’t just to make fun of clichéd fairytales; but rather to point out what is truly at the heart of these tales – not just Disney fairytales; but all fairytales. Fairytales were meant to teach lessons to people and beyond all of Galavant’s fun and antics, there are lessons to be had.

We see how things aren’t always what they appear. Madalena seems the purest of all, but is actually quite sadistic. Galavant and Isabella started out detesting each other and are already showing signs of liking each other. Isabella might have seemed like a helpless damsel at first; but she is the one to actually train Galavant back into shape. You must never be too quick to judge something – good or bad.

The other moral occurs when Galavant admits he’s afraid to fight and move on because he’s afraid he’ll fall again. Though as Isabella points out, everyone falls but a hero is someone who picks his or herself back up. This is a lesson more powerful than any clichéd ideas of ‘love at first sight’ – which the last theme already disproves – because you must trust in yourself and keep trying no matter how hard you get knocked down. Don’t expect someone to come and save you; be your own hero. This is an idea that both Isabella and Galavant are coming to represent.

Satire’s good; but when you can throw in some anachronism and Easter Eggs for truly insightful fans – much like Mel Brooks always does with his – that is what makes a truly GREAT satire. Galavant had a bunch, and here they are:

So there you have it, the first two episodes – Part One of Four – of ABC’s Galavant. Is this show for everyone? No; but no show should be. The greatest shows out there right now are all niche shows, and Galavant has the potential to remain an incredible hit. We’ll see how the season progresses; but I hope it maintains this level and gains a second season. So again, if you love smart writing and can appreciate a great satire, this show is for you. If you like your fairytales untouched and sickeningly regurgitated, then wait for Once Upon A Time’s 4th Season to return. I however will be thoroughly enjoying Galavant for the next 3 weeks.