WHAT WAS THAT, A TRAILER FOR ANTS?!?!?! Actually, yes it was; or at least that’s what you thought midday last Friday when Marvel unveiled a mini teaser trailer – in both size and duration – for its upcoming film aptly titled Ant-Man. Though fear not! Paired with ABC’s premier of Agent Carter was a longer – and appropriately sized – Official First Teaser. So without further to do – or more Zoolander references – let’s jump right in and analyze our first look at Ant-Man.

I seriously can’t believe the trailer for Ant-Man is finally here. With all the Director change ups last year – not to mention the fact that this film has been in development since before Ironman ever came out in 2008 -, I though this film would never get here. Thankfully now it’s here and it looks glorious! So let’s take a closer look at all the pint-sized action in this huge trailer!

What makes Marvel films distinct is that they might be in the business of Superhero films; but these films almost always primarily something else – with heroes thrown in: Ironman the tech adventure, Thor a fantasy, Captain America a period piece, Guardians of the Galaxy a space odyssey, etc. With the onset of Ant-Man we not only get another film genre thrown in; but also a genre that isn’t usually associated with superheroes – the heist.

Employees can be seen fleeing Pym Technologies. Looks like Ant-Man might have some trouble with the law

The basic plot of the film – as we can see hinted at from the trailer – will follow Doctor Hank Pym recruiting Scott Lang to become Ant-Man and steal back secrets from Pym Technologies, which is now in the control of Darren Cross. During the trailer we can see Ant-Man fighting people in Pym Technologies as well as there being a mass evacuation of its facilities.

So what are the secrets Pym wants to get back from his namesake company? Well it’s a safe bet that it’s the Pym particle itself – yes, Pym particles . . . the man likes to put his name on things. So what is a Pym Particle? Well that is what allows the Ant-Man suit to simultaneously shrink the wearer in size while also increasing the wearer’s strength – like an Ant. Though who is this new hero behind the suit: genius, billionaire, playboy, philanthropist? Nope, he’s a criminal.

Will Scott put on the Ant-Man suit? 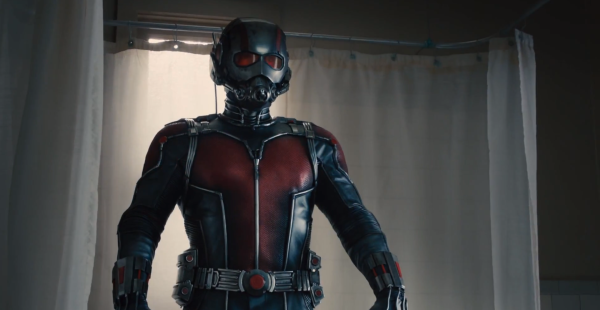 Of course he will! And it looks awesome

That’s right, Scott Lang is a criminal – former thief actually – and when we first meet up with him, we find that Hank Pym has been watching him for a long time. He knows that whatever crimes Scott has committed was for his sickly daughter Cassie. Pym is confident that Scott is the man for the job, though not to save the world; but rather the future of all mankind. A tall order to be sure; but Scott seems to accept the offer as we see him leaving the prison under escort after some sort of brawl. Doctor Pym probably arranges his release under the guise of a transferred sentence – serve his time by working for Pym. With there being rumored flashbacks including Howard Stark and Agent Carter, Pym’s definitely got connections.

Familiar Theme – Humor, Emotions & A Chance To Be Something More:

Wait a second! “A chance for a former criminal to become something more”, why does that sound so familiar? Oh yah, that was the framing and overall theme of Marvel’s enormous hit last summer Guardians of the Galaxy. If it isn’t broke, don’t fix it; and I’m personally glad this is the mode through which Marvel is approaching the character of Ant-Man. Though there’s one other very important aspect we need: humor.

Scott is released from prison

Scott Lang and his daughter Cassie

As if the idea of a man whose super power is to shrink and ride a giant ant wasn’t enough, his name is Ant-man. Unlike the other “Man” heroes out there – IRONman, SPIDERman, BATman, SUPERman – Ant-Man doesn’t really seem that threatening. Well in perfect Marvel Studios fashion, we see Scott Lang immediately poking fun of the name and asking is it too late to change it’?

Becoming a part of something bigger and humor are very big in the Marvel Cinematic Universe; but there’s been one component that has been becoming more and more apparent – especially in Phase 2: emotional moments. Seeing Scott Lang with his sick daughter immediately reminds us of Peter Quill and his sick mother; but this time reversed. Action and humor are very important to films, but it’s this emotional connection to films that truly make us connect with the characters. We all have someone that we want to protect and make smile. This framing will allow us to root for Scott not because he’s the protagonist; but rather because he represents the potential hero in all of us.

So who else is in this film? Well we get to see a couple shots of the villain Darren Cross, played by Corey Stoll, who will eventually don the Yellowjacket costume – a suit similar yet far more sinister looking than the Ant-Man suit. The trailer doesn’t show this costume; but we did get a couple leaked images of it – as well as a poster version that helps us to visualize the full complexities of the suit.

A rendering of the Yellowjacket costume in the film

We also see a couple shots of Hank Pym’s daughter Hope Van Dyne seemingly working at Pym Technologies as well as training. Hope – played by Evangeline Lilly – will eventually become the Wasp in the film and will most likely help Scott a few times throughout the film. Then again, Yellowjacket used to be a hero in the comics, so its entirely possible that this is Pym’s estranged daughter – as hinted at by her keeping her mother Janet Van Dyne’s maiden name. Again, no costume seen for her; but she is sporting the iconic Wasp ‘pixie’ haircut.

The final character that could appear in this film isn’t really a NEW character; but rather an alternative form of one we’ve already met: Giant-Man. There’s several things that hint at this being a possibility, the first of which is how ‘growing in size’ has also always been another power of Ant-Man. The next piece of evidence comes from an Entertainment Weekly poster, which shows Ant-Man changing size. Though due to the uneven sizing of the characters in the image, it’s unsure if he’s returning to normal size or growing even larger. The final moment of possible ‘hint’ comes in this trailer itself when Scott asks if its too late to “change the name”. Giant-Man is an alternative name of Ant-Man so it could certainly be worked into a moment during the final act of the film.

So there you have it: something new, something familiar. Ant-Man seems to have it all and looks like we’ll finally be rewarded for all our patience. Ant-Man won’t hit theaters until July 17th, so we probably won’t get another full trailer for a little while. The bigger focus right now is Avengers: Age of Ultron, which is scheduled to have a new trailer unveiled on January 12th. So stay tuned for more updates on all of these titles and more.