Agent Carter returned for it’s third episode – remember the first was a two-in-one special – and this time the battle hits too close to home. With threats, revelations and death, things are escalating pretty fast on Agent Carter. So let’s set aside a moment to take a closer at Agent Carter “Time and Tide”.

The episode title is of course a reference to the old saying “Time and Tide waits for no man”, though there are plenty of other meanings this title can have. First of all, let’s get to the literal phrase of time and tide. It might wait for no man; but someone sure waited for it. As we learned this episode, whoever broke into Howard’s vault did it under the cover of a massive storm which not only shut down all the alarms; but also caused the sewers to overflow into the river. All the thief would need to do is wait for the right TIME to move the contents of Howard’s vault out through the sewer channels underneath the house when the surge of the flood waters (TIDE) came.

The next meaning comes when looking at the phrase “Time and tide waits for no man” as a whole and we wonder what else waits for no man. This is of course our title heroine Agent Carter herself. As Jarvis points out, most of the men in Peggy’s office don’t respect her and would try to railroad her in with Stark if she turned over the stolen weapons herself. If she wants to complete this mission, she can’t rely on the men of the SSR and accomplish this herself.

The final poignant meaning of this episode title follows the same path as that last as we wonder ‘what else waits for no man’; and the answer to that question is sadly Death itself. The war might be over; but the SSR just sustained its first major loss as Krzeminski and the witness he was transporting were killed by a mysterious gunman who followed them from the crime scene. Though sadly, the department head seems more than happy to pin this all on Stark – even if he didn’t pull the trigger – since it was his case and stolen weapons that led the agents to that pier.

Remember, this is the Post WWII Era. So if you’re still wondering why Peggy is looked down upon and women in general are treated as if housewife is the only thing they’re good for – ’twas the era. Though thankfully not every guy is a complete ass as Jarvis has her back, yet also trusts her abilities completely. So when one of the few good men in Peggy’s life is in trouble, she must come to his aid. Though with the SSR pressuring Jarvis and threatening his wife as well as deportation, Peggy must save her friend; but how?

You might have been a little confused as to how Jarvis got off. Well when Peggy came in and revealed that she’d mistakenly taken the stolen car report, she revealed that the SSR did indeed know of the stolen car report and had no judicial grounds to keep him there. With the only thing thing Jarvis to the case – the car – now acknowledged as stolen, Jarvis could walk free; but it was Peggy who’d end up in hot water.

Revealing herself to Jarvis was a good – secret – way to remind him that he’s okay; but by getting him off with the stolen car report, Peggy’s job is now in jeopardy. With the death of Krzeminski, Peggy could either become more needed OR seen as responsible since he tried to get her to work his shift that night. It could have bee her, and considering Peggy’s office, some might have wished it was. Though was Peggy’s sacrifice for Jarvis worth it, or she just free a treasonous fiend?

Jarvis – The Price & Cause Of Treason:

Thinking that the SRR would follow the license plate back to Jarvis – considering Howard is currently on the run – makes sense; but thinking they’d dig up past treason charges against was something we didn’t see coming. So what did Peggy just get herself into? Could Jarvis be a secret evildoer and real mastermind behind the Stark heist? Of course not! The actual story of Jarvis and his treason is actually just as adorable and heroic as he is.

While serving in Budapest – here we go again with Budapest – Jarvis fell for a lovely young girl; but with when the War broke out her had to find a way to ensure her safety since she was Jewish. The general under whom Jarvis was serving had a bunch of letter that could have ensured her, yet the general refused to sign one. Jarvis then forged the general’s signature in order to protect the woman he loved, which resulted in him getting charged with treason and a dishonorable discharge.

As for what happened after that, Stark just happened to have a quarrel with this general and decided to help Jarvis out and screw the general – story for another time apparently. This explains how Stark and Jarvis met and why Jarvis feels so indebted to him. As for what happened to the young Jewish girl Jarvis saved, her name is Anna, and she is Jarvis’s wife. This is why Jarvis reacted so strongly to the threats of bringing up those old charges. Anna knows nothing of the trouble Jarvis went through; and he’d prefer things to stay that way. 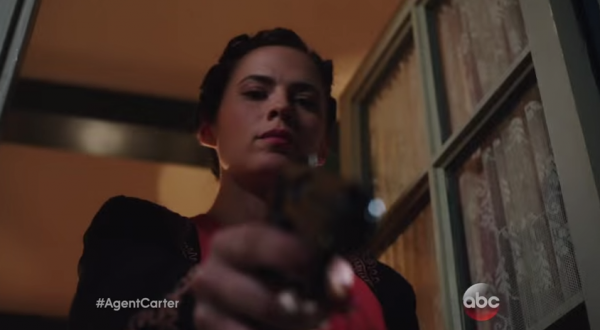 I’m not sure if it’s the way he said ‘drive safely’, how Zandow knew SSR would come, how he’s quick to shift the shooting blame back to Stark or his over manner of douche; but I don’t trust the SSR head. We’ve seen organization corrupted from within before. Hydra did it with S.H.I.E.L.D., so who’s to say Leviathan hasn’t done it with the SSR? We’ll have to keep a look out for that one; but in the meantime it looks like Peggy’s next adventure will once again bring her into contact with Howard Stark and learn something sinister.

What does Peggy mean in the preview when she tells Howard that Steve Rogers dedicated his life to this country, NOT Stark’s wallet? Was Stark trying to make a super soldier serum or something taken from Rogers? Stay tuned here and on Facebook to find out when Agent Carter returns January 27th.