Agent Carter returned this week with possibly one of the best episodes yet. Between the Black Widow training program and the return of the Howling Commandoes, there was a lot to love. Though despite this, the show continues a very fragmented pacing at best. With only several episodes left can Agent Carter wrap up nicely and lead to a second season, or will it remain as a One Shot turned One Season.

Last week we saw Dottie take down a would-be assassin from killing Peggy. Based on the fighting style, we suspected she was an early part of the same Russian training program that spawned the Black Widow. Well this week we got our confirmation on those beliefs as Peggy and the Howling Commandoes explored this nightmarish “Red Room”.

The “Red Room” – in the comics and Agent Carter – is a KGB Soviet school that takes in young orphan girls, brainwashes them and teaches them to fight. The school appears to have been in operation for quite a while as Dottie’s flashbacks show her sharing food with a friend one moment, and then snapping her neck in a training exercise the next – a bad sign for Carter whole Dottie tried to share food with this episode. These girls are trained to be soulless killing machines and the psychological effects of their training last long after graduation as we see Dottie still feeling the need to sleep in handcuffs.

Seriously, what is it with creepy, homicidal little girls that scare us so much – probably the creep and homicidal part. Hey, at least there weren’t creepy, homicidal twins *cough* The Shining *cough* Either way, I’m sure this isn’t the last we’ll see/hear of the “Red Room”. Judging from the latest Age of Ultron trailer, we’ll see Black Widow’s initiation into this organization and possibly some signs of genetic/biological testing – which is also a big part of the “Red Room” in the comics.

Carter Will Make Her Own Way: 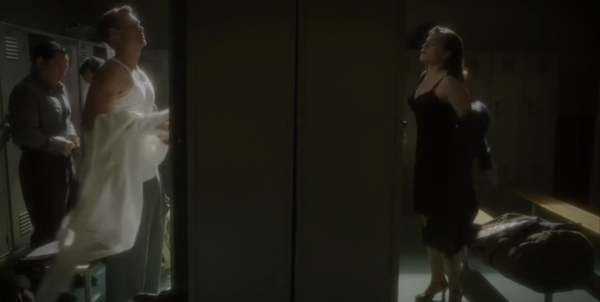 With Jarvis’s insistence that the SSR doesn’t respect Carter or take her seriously, Peggy heads to the office on a mission to prove him wrong. From out thinking the code-breaker to her extensive knowledge of the European front, Peggy is the best person for the job; but its not until she delivers the assistance of the 107th – aka the Howling Commandoes – that she is allowed to go.

Needless to say, there’s a stark contrast between how the SSR and Howling Commandoes treat Peggy. Every time one of the agents makes a crack about Carter, Dum Dum Dugan and the other Commandoes step right up and correct them to show some respect. Dugan even wonders why she tolerates them and wont return to the battlefield with them; but Peggy wants more. The office is her new battle front and she’ll make her way through it.

Stark & The Mystery Of Finow:

Dooley was on a fact finding mission this week, and it seems as more pieces are added to the puzzle, the more confusing things get. While getting drinks with an old reporter friend (played by John Glover), Dooley confirmed that the Battle of Finnow wasn’t German vs Russian at all. Apparently it was the aftermath of something – we don’t know what – but General John McGinnis was involved. Stark was called in for clean up, but was apparently pissed at the general.

The two had a pretty heated argument which led to Stark throwing the first punch and then the General beating the crud out of him. Considering what we learned a few weeks ago about Jarvis, could this have been the same General he was serving under – the General Stark wanted to humiliate. Since Dooley asked Jarvis about the General as well, this could be connected.

The aftermath resulted in the General resigning, Stark turning down a huge research & Development project for the US Government and now this whole ‘selling-secrets’ business. Its starting to seem as though the SSR is aware of Stark being framed; but does Dooley truly want the truth? I hope so.

Meaning Of “The Iron Ceiling”:

For those of you unsure of what the episode title “The Iron Ceiling” refers to , it’s a reference to post WWII relations between the Soviet Union and the rest of the world. The “Iron Curtain” as it was called was a “political, military, and ideological barrier” that was Soviet Russia’s attempt to isolate itself and its outer lying nations from the rest of the world.

Okay, so why Iron CEILING. Well, just as the term “Iron Curtain” was made famous by former British Prime Minister Winston Churchill, the other meaning of ‘Iron Ceiling’ refers to our favorite former Brit– Peggy Carter. The Ceiling is her limitation in the workplace during this Era; but Peggy is able to seemingly break through that ceiling and get herself put on the mission to Belarus and earn some respect – a feat Jarvis didn’t think she could accomplish. Though whether that respect will remain is another story.

Judging from the promos for next week, Peggy will find herself in the crosshairs of the SSR thanks to Souza’s work in identifying the mysterious blonde. She might have proven herself this week, but remember this is still Post WWII Era. Many coworkers might find be all to eager to railroad Peggy – especially if Dottie (who can imitate Peggy’s voice) plants evidence to frame her

So Thompson’s been … well an ass almost all season. Well, this episode we finally find out why; and as expected, there is a reason for his blatant attempts to overcompensate and push people away. During the war, Thompson earned a Navy Cross – the 2nd highest honor that can be bestowed for valor – but it was all a lie. One night while on patrol, Thompson fell asleep and awoke to find a small group of enemy soldiers walking into their camp. Frightened by what could happen, he immediately shot them all without noticing they were holding a white flag to surrender. Thompson immediately buried the flag and then came up with the fake report which earned him the medal.

The guilt of this decision has weighed on him ever since and the fear of war has remained with him ever since. This is one explanation as to why he basically acts like a 7 year old around Carter and demeans her actual service record. In the end, he gains a lot of respect for Carter and tells her the truth; but will this change in weeks to come? Will Thompson return to acting in fear and throw Carter under the bus, or will he do something that finally earns him that medal of valor?

The Tragic Problem With Agent Carter:

Agent Carter is a great show and the first superhero show in decades to have a female lead who – more impressively – has no powers of her own. The problem with this show though is the pacing – both intentionally and unintentionally. Whether it’s taking almost every other week off or getting interrupted by news segments, this show has had an incredibly difficult time of keeping fans glued to the sets.

Sure it might last for an episode; but then you have to wait two weeks. Other times they are back to back, yet the show is interrupted twice during very key points rather than during commercial segments. This show has tremendous potential and has already done spectacularly considering its dated setting; but it’s sad – and a little ironic – that Agent Carter keeps on getting dismissed and put on the back burner, much like what the SSR has been doing to Peggy Carter herself all season. If Agent Carter isn’t picked up for a second season, it won’t be because of the show itself; but rather because of ill-advised and tragic timing.