After a shaky pacing through most of the middle of the series, Agent Carter is holding is momentum well and is growing ever larger as it nears its Season Finale. With only one episode to go the stakes have never been higher as Peggy must win back the trust of the SSR before Leviathan gets away with everything. So let’s get our case files ready as we dive into another Closer Look at Agent Carter.

The Meaning Of “Snafu”:

As with every Agent Carter episode, the title is a reference to an old War/1940s term and serves as a unifying theme for the episode in question. This week title in question ‘Snafu’ of course means a “confused or chaotic state” – which is a clear reference to the multiple distractions Leviathan is causing the SSR as well as Carter’s suspected treason – but reveals its truth thematic importance when we look upon its actual 1940 derivation.

In the 1940, ‘Snafu’ – or SNAFU – was a militaristic acronym that stood for “Situation Normal: All Fouled (or F’d) Up”. Upon closer inspection of the episode, we realize that this juxtaposition of normal yet chaotic is actually a much better representation of the episode than just ‘confused and chaotic. Chief Dooley is the prime example of this. Despite the dream-like trance Ivchenko has put Dooley in, there is actually a lot of madness and confusion going on around him. This is especially true during his final moments when he is strapped with a bomb; yet originally only sees his family at home. 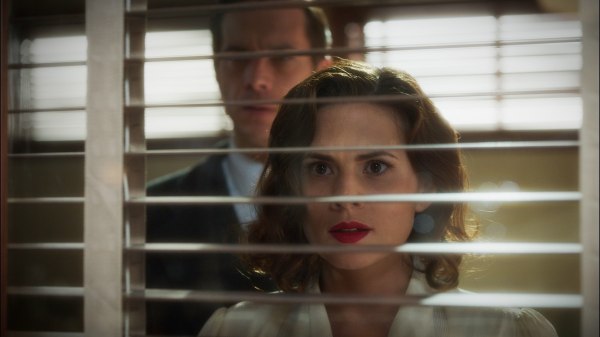 This balance of normal yet ‘fouled up’ persistsed throughout the entire episode as most of the SSR acted as if nothing was wrong – or all was over – while Carter scrambled to Leviathan stop Leviathan’s plans. You couldn’t tell from the office that they were in the middle of a full out war; yet by episode’s end, the whole office realizes just how much of a SNAFU Leviathan has gotten them into.

All season we’ve seen how Peggy’s office treats her, heard Jarvis warn her that they’ll try to railroad her, and witnessed Peggy confidently proclaim that she’ll make them respect her. This episode finally brought all all of those points together as Peggy Carter fought for her innocence against Souza, Thompson and Dooley.

“To you, I’m a stray kitten left on your doorstep to be protected. The secretary turned damsel in distress. The girl on the pedestal, transformed into some daft whore.” – Peggy Carter

The above quote was such a brilliant line by Peggy as it not only demonstrated her frustration; but also detailed how Dooley, Thompson and Souza all see her. Dooley’s shown how he doesn’t want to be ‘responsible’ should something happen to her, while Thompson only saw her as a secretary/damsel before they went into the field together. As for Souza, he’s been crushing on Peggy all season; but once he learned that she might be a double agent, he wanted to crucify her more than Thompson did.

After Jarvis devises a plan to get them out, Peggy decides to come clean about everything if they are to stop Leviathan. As reparations for his previous witch hunt, Souza belives in Carter again and Thompson is quick to follow. Sadly, Leviathan’s plans are already far along and there is still a wolf in the hen house.

The Wrath Of Leviathan:

So is Dooley just an idiot or is Ivchenko THAT good? Well the purpose of that initial flashback to 1943 Russia was meant to answer that exact question. Ivchenko isn’t some side show charlatan; but is in fact so good at what he does that he’s actually able to keep someone under hypnosis while they have their own leg crudely sawed off. If he can do that, that no Agent has much of a chance against him. Dooley did have a moment or two of questioning; but he ultimately succumbed to the trick in full.

As if a hypnotist extraordinaire wasn’t bad enough; they still have to face Dottie. Thompson knows full well what she could be capable of considering she saw what a young Red Room agent is trained like. In this case, shoot first ask questions later might have been the better option as all who encountered Dottie except Souza met with an untimely end. Between sewing seeds of uncertainty while interrogating Carter and later planting the bomb on Dooley, Leviathan has bought itself enough time to enact its master plan – but what could it be?

Item #17 – What Really Happened In Finnow

There’s clearly a lot more to this story than we currently have; but the final moments of this episode just gave us a interesting peak at what might have truly happened in Finnow. Thus far we know at Howard Stark got into an argument with General John McGinnis in regards to the battle and that there was a massive slaughter of Russian troops despite no enemy forces actually being there. Well as this episode ended we found what appeared to be Item #17 being tested in a locked movie theater to ensure it maximum potency; and the results were horrific.

This poison gas seems to induce a blood lust in anyone in proximity until all effected want to literally rip each other to shreds. This berserker mist could certainly explain the atrocities at Finnow and why Stark would be so upset – did McGinnis use one of his pieces of tech without asking? The past few weeks I was hoping they’d go the comic route of seeking the ‘super soldier’ formula; but it appears that isn’t Leviathan’s plans as there was no real interest shown Cap’s blood sample. Could the hybrid monster soldiers still happen, possibly; but it doesn’t have to happen now. Who knows? Perhaps that’ll be something Agents of SHIELD can explore more since they are already exploring Inhumans and showed a blending with Agent Carter in the first half of the season.

Finale – The Perfect Chance For A Chris Evans Cameo:

With all the focus upon Ivchenko’s hypnotist abilities and Dooley’s warning to not let him start talking, we know this ability might be used at Carter at some point. Additionally, unlike others Dooley showed a few signs of resisting the trick. It would make tremendous sense for Agent Carter to finally be the one to break the trance and defeat Ivchenko; but what would she see?

Simple, Stever Rogers/ Captain America. Again, this is just a hypothesis – and dream – of mine since no official word of a Chris Evans cameo has been released; BUT it would make tremendous sense for it to happen. Hopefully it does because this moment would not only make sense; but also had a bit of a ‘build up’ this episode when Carter said she kept the blood so that she could have one more chance to protect him. With all of these clues, come on Marvel! Let me be right about this one because you have to admit it would be an excellent moment. So stay tuned here for the stunning conclusion to Agent Carter.