Our heroes have finally made it to safety; or have they? Last night’s Walking Dead brought up almost all fives seasons worth of story material as our heroes learned whether or not they still had what it takes to trust others in this dark hellish world. So what does Alexandria mean for the group? What was the importance of Rick vs Michonne? All this and more in this week’s Closer Look.

“The Distance” To Overcome – Meanings:

As always, this week’s episode of The Walking Dead had a simple yet cryptic title. So what was the true meaning of having “the distance” as an episode title? Well you could look at the physical distance they’re overcome, not just the distance from Atlanta to Alexandria but also the short hazardous stretch between the barn and Alexandria. Though “the distance” that the title refers to might be a little more metaphorical than that. 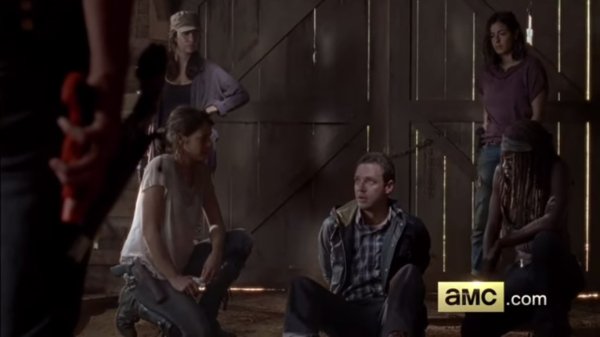 Rather than the literal distance between two geographical points, this episode places tremendous gravity upon the distance between character plot points. This entire season has shown the repercussions of trusting the cannibals at Terminus and how that has proceeded to further taint the group’s already suspicious attitude. Had Aaron approached the group before Terminus, they would have jumped at the idea; but now the idea of ‘sanctuary’ has been so spoiled that they might never trust the idea again.

If their experiences have taught them anything, it’s that if something sounds too good to be true, it probably is. Woodbury, Terminus, and even Noah’s former camp have shown them that sanctuaries either don’t last or are just lies. In fact, when Aaron is originally explaining Alexandria to Rick and the group, his choice of words is startlingly familiar to the sales pitch given at Terminus.

“Together we are strong. You can make us even stronger” – Aaron

“The more people become a part of us, we get stronger” –Alex

It’s no coincidence that Rick knocked Aaron out right after he said this. Rick has been here before and he won’t fall for it again. From Michonne talking about their past acts of kindness to Rick remembering their past failures, everything about this episode saw characters coming to terms with how far they’ve come and whether or not they can go the distance and hold onto hope for one last time.

Fans of the comics might have known where Aaron would lead the crew and how it’d be a good idea; but the build up and execution of this episode still kept you on the edge of your seat. This show has changed drastic moments before and there was no telling if Aaron would serve his same role in the comics or if it was all a clever case of misdirection.

Rick has always been our guide and what he says/feels usually turns out to be truth; but this episode kept you guessing till the bitter end on whether or not to trust Rick. He might have been dangerously close to going full ‘Ricktatorship’ again; but you have to remember where he is coming from. Unlike the rest of the group he has two children to look after and every time he’s found what appears to be a safe haven, he’s been wrong. It is not until Rick is actually outside the gates of Alexandria that he is finally able to let go.

The entire episode has been about Rick once again finding that inner trust and hope inside him. After Michonne tells him to “let go of the fight” we see Rick walking off into the woods a few miles away from Alexandria to place a gun in a blender. Is this him literally giving up the fight or is it him leaving a weapon for him to return to like he did at Terminus? The continued vagueness of this moment shows that Rick still doesn’t know what to do. The answer of course comes when he’s outside the gates of Alexandria and hears children playing, rather than the silence he heard at Woodbury, Terminus and Wiltshire.

The Product Of Their Kindness – Michonne:

Michonne has always been a powerful warrior and ally to Rick. The two have been in sync so much the past few seasons that many have started hoping for a romantic pairing for these two. Though this episode finally saw these two at odds on the most dire of subjects – hope. Since Bob, Beth and Tyreese are now gone, Michonne has become the moral compass/light of the group and this episode showed her fighting more than ever to remind the group of where they came from.

When Aaron comes with them promising sanctuary, anyone would be doubtful; but Michonne sees that he means them no harm based on his approach. Maggie, Sasha and many of the others all concur with this; yet Rick still feels as though it’s a trap and his people will swoop in and try to hurt them like at Terminus. It’s Michonne more than anyone who stands up to Rick multiple times and tells them “We need this, so we’re going. All of us.”

Michonne is able to be so straightforward and hopefully about this not only because she realizes that EVERYONE out there can’t be a monster; but because she’s been where they are now. When we first met Michonne she was the ‘crazy lady with a sword’ who let Andrea in and then was able to accept Rick and the others as her new family. They took her in; they saved a priest; they are good people who give others chances. Michonne has grown tremendously the past few seasons and has more or less become the embodiment of the group’s kindness and ability to give people chances.

Though with all her hope, she is still the pragmatic and serious one. When she realizes there’s no people in Aaron’s photos and his excuse sounds a little shaky, she realizes that its not just about ‘them’ auditioning for Aaron’s group. Aaron must audition for them and answer the 3 questions – How many walkers have you killed? How many people? Why?. Michonne realizes that the group needs a sanctuary; but she also knows that if all of this goes South it’s on her. When Aaron kicked the door in Michonne’s face, that moment seemed to confirm that this was all wishful thinking; but thankfully Noah’s humanity was soon proved with loyalty and love.

As we started to see in “What Happened And What’s Going On” Glenn has gone to the dark side a bit. With Maggie pulling away and all the repercussions of Beth’s death, he’s starting to feel that other survivors don’t matter. This is the Glenn we see when he and a small group head out to confirm Aaron’s story about the cars; and he tells them to shoot first and ask questions later. Though as the episode proceeds, the Terminus parallel arrives again and Glenn has to make a choice.

When Glenn sees Aaron having trouble, he hesitates because he remembers what happened the last time he tried to help a stranger – the man locked up at Terminus. Perhaps it’s fitting that there was a Dale reference later in the episode – the man who inspired Glenn to keep that happy outlook – because Glenn decides to help Eric and is rewarded for his choice as they both save Michonne and Rick from the remaining walkers. From this point on, Glenn steps up for Aaron and tells Rick that he was wrong a few episodes ago when he said “It doesn’t matter”. It does matter whether or not they kill other survivors they come across.

Seeing Aaron and Eric together was a very powerful moment, not just because they’re the first full-fledged homosexual couple – only hinted at with Tara – but because we actually see the love and tenderness in this moment. In this world love is seen as something that makes you weak; but can also strengthen and galvanize you into action. When we first saw Aaron flee the car at the sight of a flare, we didn’t know what it meant or if Aaron truly was untrustworthy as Rick had feared.

The truth of the matter is that the flare meant that one of them was in trouble, and everything else took second tier of importance to this fact. This love is also the reason why Eric was originally spying on the group and keeping watch. He was worried about Aaron and swooped in when he thought the situation was going south, which resulted in him saving Maggie and the others from the horde.

Though most importantly, it is that tender moment between Aaron and Eric that we the audience knows once and for all that these people are trustworthy. The same is true for Rick to an extent as he sees Aaron rather die than spend the night away from Eric’s injured side. He realizes then and there that they are human beings capable of love, and not the monsters they’ve met the before. With trust earned and Aaron pledging his loyalty to Rick and them for saving Eric’s life, the crew continues onto Alexandria.

We haven’t really checked in with the rest of Team GREATM lately. Sure we know Eugene is alive and Maggie/Darryl are dealing with their stuff. Though what about Abraham and Rosita? When we last saw these two together, they were having sex in the library before Abraham went all rogue and tried to pummel Eugene to death. So what happened to this budding couple?

Well while investigating the trailer Abraham checks in with Rosita to see if she though he was going to hurt her any time during that period. She simply responds “it’s not you”. We can’t really make much from this exchange since it’s so short; but it’s the brevity that actually reveals the most. It’s been about 3 weeks since that freak out and if these two are JUST starting to acknowledge it then that means these two haven’t been talking to much lately. This also explains why Abraham was focusing on drinking last episode. He’s guilt ridden and afraid he’s lost Rosita.

So towards episode end when Rosita points out the Washington Monument to Abraham, the importance lies in not just how they finally made it to DC – their original mission – but how she is actively talking to him now. The wall of silence has broken and it looks like these two are okay – or at least starting to be. That is why Abraham looks more at Rosita with a shocked smile than the monument itself. He’s just about to complete his original mission – in a sense – and the woman he’s grown to love is forgiving him. He can make it. “[He] can make it!”

Next episode we will explore the long awaited Alexandria Safe Zone; but don’t think that means the action is over. The comics held tons of stories and massive plot lines at Alexandria; and you can be sure the show will as well. From the looks of things, Rick starts his ‘interview’ next episode while Carl is slowly approaching a door with a dagger. Does this mean there’s already trouble in their new safe haven; or has Carl yet to ‘let go of the fight’ and is merely checking out their new house like any other house-raid?

We’ll find out next week. So stay tuned here, Follow Me on Facebook, and I hope you enjoyed this “Closer Look”.

3 thoughts on “A Closer Look: The Walking Dead – “The Distance””