When Stephen Amell and some of the people behind Arrow said this episode’s end would be the most shocking thing we’ve seen since kicking Oliver off a cliff, we all assumed it meant the death of another character. Would it be Malcolm, Roy, Diggle? The answer of course was neither as the shocking conclusion to the episode brought Oliver a choice like no other: to become the new Ra’s Al Ghul.

What does this mean for Oliver and the rest of the cast? That is exactly what I intend to answer character by character as we Look Ahead to when Arrow returns in a few weeks.

Confessions, Sacrifice & Atonement – Thea’s Path Out Of The Darkness:

Ever since we met her in Season 1, Thea Queen/Merlyn has always been about ‘the truth’. So it should come as no surprise that she would abhor keeping secrets and decide to tell Laurel and even Nyssa that she was the one who killed Sarah. With the guilt of her death weighing heavily on her, Thea can’t stand to look at those she loves and keep this secret from them – the opposite of what we’ve seen this season from Laurel and usually from Oliver.

We see this guilt build as she tells Laurel, and is told that it wasn’t her choice; but what happens next is. This is what leads Thea to act out and turn over her father Malcolm to the league. Oliver goes to Nanda Parbat because he knows Thea’s rage will eventually subside; and he is correct as we see her sorrow with Roy and feels awful for sending her father to his death. It is at this point that we find Thea confessing to Nyssa and offering up her life.

Thea’s motivation has turned from trying to alleviate guilt to just giving up as the weight of her actions – conscious or not – is too much for her. Though we know that Nyssa won’t kill Thea – it’s a safe bet – but we can assume that her response will be one of ‘atonement’. Thea just gave up her father in a fit of rage; so it’s safe to say she can’t do anything worse than that. She’s hit rock bottom and the only rout for her now is less talk and more making up for things.

Just as Laurel told her – and Roy showed her -, the way to make the pain go away is to try to make up for things. It might never fully fix things, but it can make it more bearable. When Arrow returns, I’m sure we’ll see Thea start to suit up and begin the long path of redeeming herself with a more serious and less childish attitude.

To Save A Soul At The Cost Of Your Own – Oliver Kills Again:

Wait, did Oliver Queen just… kill. With him and Diggle attacking Nanda Parbat and wanting to remain unseen, it certainly looks that way – because I don’t know HOW a couple arrows to the neck ISNT fatal. So what did this? What caused Oliver Queen to finally break his promise and kill? Well, the answer – much like his reason for going to Nanda Parbat – is two fold. The first is clearly his love for his sister and wanting to sacrifice anything so she doesn’t have to live with the guilt of being responsible for a parent’s death. When Diggle told Oliver “you can’t save Thea’s soul for the cost of your own”, this could be what he was referring to – killing. This is why Diggle knows there must be another reason.

This is reason is Oliver’s nightmares. At the episode’s start, it looks as though Oliver isn’t sleeping because he’s training too much; but the actual answer is because every time Oliver closes his eyes he just sees the fall. He can’t sleep knowing there is someone out there that is that much stronger than him and could kill him any time he wanted. Oliver is going to Nanda Parbat to save his chance to make the nightmares stop. Though what happens when the nightmare asks you to join it?

Inheritor To The Demon’s Head:

With Oliver killing again, Ras posing the question about becoming his successor was perfectly timed; but you have to remember what this question – and its answer – really means. Ras might be ‘evil’; but he is a necessary evil. He kills in order to protect, which isn’t too far off from Season 1 Oliver – just on a much larger scale. If Oliver accepts, he completely turns his back on his promise as well as much of his team; but is that any different from recent happenings?

Team Arrow has been getting more action without him lately and refuses to go back to being simple sidekicks anymore. Laurel and Felicity have lost almost all trust and faith in him; and Roy is offering Thea that ‘outlet’ to talk to yet never hide anything from. With no family or company to go back to and the suspicion that Quentin will go back to Arrow hunting soon, becoming Ras successor might not be such a bad thing. Though would Ras really make his successor an outsider and rebel rather than his own daughter?

Say what you will about Laurel (Katie Cassidie); but the scene between her and Thea was brilliantly acted. You could see the rage behind Laurel’s eyes trying to rise above her rationale. Laurel might be rash; but she’s not rash enough to truly see Thea as the cause of Sarah’s death. Sure she was outmatched by Malcolm – duh – but she shows much more control than Oliver gives her credit for. It is because of his constant secret keeping and I-know-best nature that Laurel wonders why she was ever in love with him.

This certainly put away any hopes of a Laurel / Oliver relationship anytime soon; but it did help set up for a different kind of relationship. One of the most underrated scenes of this episode was when Nyssa and Laurel spoke about Sarah and Laurel’s transformation into the new Canary. Both of these two women loved Sarah; and it is this love that will keep bringing these two together. Did you happen to notice how each spoke about their favorite aspect of Sarah (Laurel – her smile, Nyssa – her laugh). Laurel offers Nyssa the only remaining connection there is to Sarah, just as Malcolm was the connection (of hate) for Laurel.

Though it’s not just their love of Sarah that they share; but also how each has been abandoned by their fathers – or is about to be. Now that’s not to say they’ve been completely cut off; but look at each one’s paternal path this episode: Laurel’s father is still ignoring her and hasn’t spoken to her in a week. Ras Al Ghul has just offered Oliver Queen – and outsider and someone whose presence dishonors Ras – the role of successor, something that was Nyssa’s by birthright. We heard how Nyssa’s relationship with Sarah ended her chance at being successor; but I feel like it wasn’t the ‘relationship’ per se that made Ras disinherit her. I’m sure this will be explored; but I feel like the true reason is because of Nyssa’s discovery of love and happiness – something Oliver has lost more and more of rather than found.

When Arrow returns we are going to find Nyssa going through some very different emotions. Everything she has been raised upon and taught is now taken from her and she will – much like everyone else has during the second half of this season – try to find her new self. With the weight Nyssa placed upon her love and amusement of Sarah’s innocence and laughing rather than fearing, we will find Nyssa who will learn about the kindness in the world – and potentially a Laurel that will gain some real fighting experience and female badass role model.

In case Ras asking Oliver to become his successor wasn’t shocking enough, Olicity fans around the world shed a tear of sorrow when Ray Palmer and Felicity slept together. Though sleeping with Felicity isn’t the only thing Palmer did this episode that Oliver can’t. In fact, this former Malcolm juxtaposition grew to become the perfect reverse foil for Oliver as he ascends – literally – to become the Atom.

A-named heroes aside, as the episode progressed we saw Oliver descend more and more until he was at the mercy of Ras Al Ghul and offered the chance to become the necessary evil in the world. Meanwhile, Ray soared to new heights with his Atom suit. Now many people have compared the new Atom suit to an Ironman rip off – heck, even I’ve joked about it – but in this episode and the rest of the season, I believe this will serve a very different purpose.

Ironman suit or not, his test flight went MUCH better

With the inclusion of Ras and other elements, Arrow is very Batman-like. So what the Atom offers is the usual counter foil to Batman – Superman. Yes, Brandon Routh did play Superman in the films; but think of what Atom will represent here. He’s a hero that can fly and offers a much more bright and inspiring take on heroism rather than the dark underground natures of The Arrow. By changing the usual comic Atom into something more of a self made man with a suit, you can basically give a human character all the idealized quality of Superman and the pure-good hero.

It’ll be interesting to see how these two interact in the future; but I assume it wont be too far off from the usual Batman / Superman dynamic. Initially don’t like each other; but eventually come to respect each other’s merits.

When we met General Shrieve last episode, we thought all Oliver’s and Maseo’s problems were solived. Sadly, we know ‘IT’ is coming – the moment when something goes horribly wrong and Maseo turns to the League, splits with his wife, and possibly loses his son. So this episode when we saw Shrieve debrief them and then release everyone, we knew something had to go wrong; and as the events unfolded we knew more and more this was a trap.

Whether it was Waller or Triad payback, Oliver and the Yamashiro family found themselves under heavy fire after dreaming about their new lives and how they can always visit each other. These two family have become one; but now they must split up for the moment as they fight to survive. We don’t know what happens next; but it seems this is the start – or the end – of everything. 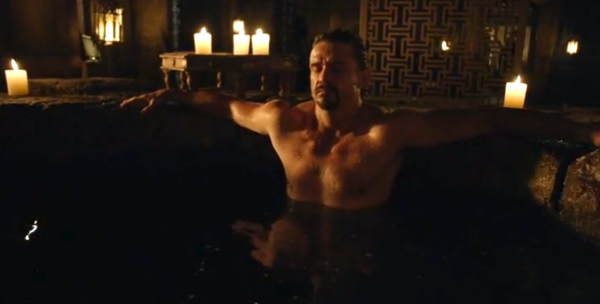 I don’t know why Arrow and The Flash are taking mini vacations after a brief ‘winter third of a season’; but in a way it makes sense. Both shows came back very early in the usual span of Fall/Spring season division, and also had big cliffhanger moments to sow besides the midseason finale. Whatever the case, we will have to wait until Arrow returns in a few weeks to see the stunning – and uninterrupted – string of episodes leading up to the Season Finale.