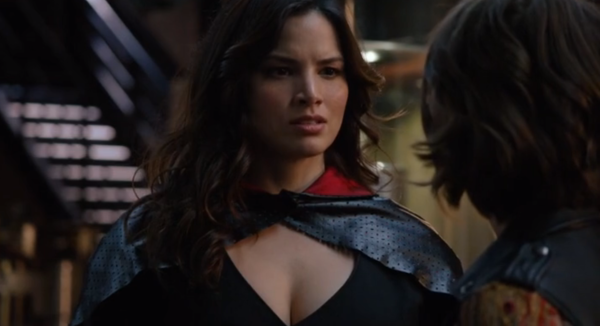 Oliver Queen has returned from Nanda Parbat, and he certainly has a lot to think about. With prophecies seemingly coming true and faith in his crusade being shaken more than ever, can he stand strong or will he accept Ras al Ghul’s offer? Find out as look into this episode and Look Ahead at what’s next for Arrow.

Oliver’s Renewed Resolve – Why We Do What We Do:

Since the Midseason premier, each of the members of Team Arrow had to decide why they do what they do, and if they wanted to still do it. Each of course decided to keep fighting and become more central members of the team; but Oliver never got a chance to do that. I mean sure, everyone else had to question this after Oliver’s death; but what death does Oliver have to question. Well, the death of his dream in a sense.

Two and a half years – and seasons – later, and the city is just as bad as it was before. If anything the villains are getting stronger and Oliver is losing more people. Malcolm’s still alive and caused problems. Slade is still capable of causing him pain. What’s really changed in the long run? To make matters worse, Felicity seems to be moving further and further away from him. Maybe Oliver should consider Ras offer; but thankfully Diggle and Felicity knock some sense back into him.

Oliver never did this for thanks; but because he wanted to protect people as best he could. So what if the police are now going to be after him? He’s dealt with that before. Similarly, so what if Felicity is with Palmer. Diggle says its temporary and felicity says that regardless she’s happiest as long as Oliver is in her life. Both outcomes are a win! So with his faith in helping others purely for helping others restored, Oliver doesn’t need to lead the League of Assassins. Then again, perhaps that job offer was more of a job demand.

So what do you do when the man who throat punched you, ran you through with a blade and then Spartan-kicked you off a cliff offers you a job as his replacement? Well that is exactly the situation Oliver Queen finds himself in this episode as Ras al Ghul asks him to become the next ‘Ras al Ghul’. With the Lazarus Pit having less and less of an effect on Ras and him having to stay in it for longer periods of time – as we’ve been seeing throughout the series – the League of Assassins is in the need of a replacement; and Ras makes quite the sales pitch.

If Oliver becomes the new head of the League, he’ll not only have unlimited resources and an army of devoted followers; but will also be able to save the world rather than just one city. To make the deal even sweeter Ras informs Oliver that he can change how the League operates and order them to no longer kill if he so chooses. So what’s the problem?

Ras offer sounds too good to be true, so why is Oliver turning it down? Well for starters, Oliver’s pride does come into play. He fears Ras and hates that there is someone out there better than him, and a simple job offer isn’t going to change that. Further more, even if Oliver could make the League what he wanted – and say no more killing – it would grant him almost absolute power; and absolute power corrupts absolutely. I might be way off here; but I have a feeling the idea of ‘power corrupting’ will become a thing this season as Palmer learns to use his new ATOM suit. He’s been compared to Malcolm a lot this season, so he too could also go a little overboard with his new powers.

Though whatever Oliver chooses, Ras has already made up his mind. The phrase, “the tale to be told, begins thus” means Ras has already started writing this tale. It cant be unwritten. As far as Ras is concerned, Oliver WILL become the new Ras just as he predicted that the law would turn on him and love would leave him. Those predictions all came to pass this episode; but Oliver held strong. So now it looks like Ras will have to give him a push; but with all this talk about Ras being certain of Oliver becoming his successor, one has to wonder how his daughter is taking it.

When we last saw Laurel and Nyssa in “Nanda Parbat”, it looked as though the two were going to form a relationship given their mutual love of Sarah and how both were seemingly about to be disowned by their fathers. Well, it looks as though everything we predicted last episode has come to pass – WOOHOO! – but please let me explain further.

Ras picked Oliver Queen, an outsider and someone who has disobeyed him at every turn, over his own daughter who has faithfully served him all this time is a complete smack in the face to Nyssa. It turns out her relationship with Sarah was what disinherited her from Ras legacy. Though it wasn’t Ras disapproval of his daughter dating Sarah; but rather his disapproval of her dating anyone at all. By opening up her heart to Sarah – and thus love – Ras feels Nyssa no longer has what it takes to lead. Oliver on the other hand – as I said last time – has lost more and more love along the way, making him a better choice for Ras.

Laurel on the other hand tried to confront her father and get to the big fight that ultimately begins to heal their relationship. Quentin on the other hand sees things differently and tells Laurel that this isn’t something she can save. After lying to him for so long, he can’t even bare to look at her anymore and basically disowns her as well. He still of course will protect her when Murmur’s gang strikes; but his rage hasn’t calmed at all – if anything it’s gotten worse. So when Laurel leaves and finds Nyssa waiting for her, these two take comfort in each other – but this could also be the start of something more.

Now I’m not saying that Nyssa and Laurel are going to start dating – then again, it wouldn’t be the first time someone has dated both Lance daughters *cough* Oliver. Though personally, I don’t think anything romantic would happen between the two because it could dishonor Sarah’s memory. What I DO see these two doing is teaching each other. Nyssa already offered to train Laurel, which we were hoping would happen last episode, and I’m sure Laurel will show Nyssa what it is to be kind and loving – all the things Nyssa knows very little about. In short, Laurel needs physical training and Nyssa needs emotional training; and the other are perfectly qualified to give it.

Home Is Where Your Heart Is – Thea’s Unknown Path:

Oliver’s not the only Queen who feels he’s worse off than where he’s started. Since Thea left Starling to ‘never feel pain again’, she’s had nothing but pain. Forced to kill one of her closest friends, trying to kill her father – twice – and trying to get herself killed to atone for it. It’s not easy being Thea Queen right now; and it’s hard to say where she’ll head next. Though thankfully, one of those places is back into Roy’s arms.

Faithful readers have known for a while I’m a total sucker for Roy & Thea’s relationship; but I think most viewers are. So when we saw Thea come to stay with Roy and then kiss, it was definitively a win moment. Though this scene also makes a lot of sense story wise too. For starters, everyone in Thea’s life has kept asking her how she is and ‘fearing for her soul’. Roy of course does too; but he always takes the role of worrying yet trusting her. He’s good for her and helps her be a better person, much like how she made him a better person in past seasons.

Additionally, remember what her last home – the loft – stood for. It was bought with Malcolm’s money and basically stands for Thea’s connections to him. Afterall, that’s why Oliver originally disapproved of her living there. So Thea’s return to Roy isn’t just to please fans; but also is the logical end for someone who wants to put as much distance as possible between herself & her “evil dad” and return to a place she feels safe and loved.

This week’s flashback took up relatively little time and simply revolved around Oliver looking after Maseo and Tatsu’s kid. So what was the point of it within the context of the episode? Well it did serve to remind us of two of this episode’s primary themes, the first of which is lost children – as we already discussed with Laurel and Nyssa.

The second theme it brought out was the idea of things returning no matter how much you think they’re behind you. Past Oliver found Shado apparently live and well long after he suspected her dead. This parallels with how Ras’s offer will keep returning to Oliver’s side and isn’t just something he can put behind him; but could there be something more as well.

While talking with Ras, Olvier was relatively unaffected by the revelation of a Lazarus Pit and spoke of how he already knew that “this world is a much bigger place than people realize”. We just assumed Mirakuru and Barry’s metahumans; but could Shado’s return be what he was really alluding to? How did it happen and could this also foreshadow – pun not intended – the return of another hero… or should I say Canary? Then again, it could not be Shado; but it did look like she recognized him too.

Ras al Ghul has donned the Green Hood himself and is now killing criminals in order to turn the police against the Arrow. By letting that criminal go and telling him to tell everyone of what he saw, you know the criminal will lie. He’ll say the Arrow just came in and killed people and leave out what they themselves were doing. Ras is set on turning all of Starling City against Arrow in order to force Oliver’s hand. Will he succeed, and what new trouble will this lead to?

You’ll have to stay tuned to find out!