The drama on Agents of S.H.I.E.L.D. continued to grow this week as the team continued to deal with Skye’s new powers as well as the return of her crazy father. While some cling onto the past too tightly, others want to leave it in ruin in favor of a different future. So let’s take a closer look at this week’s Agents of S.H.I.E.L.D. and prepare ourselves for next week’s massive power struggle.

As the episode title might suggest, the main theme for this episode was ‘belonging’. Thought it was much more than just whether or not you belong; but rather WHICH side you belong to. Much like how she was during the first half of this season, Skye struggled with whether she was still an Agent of S.H.I.E.L.D. or if she had more in common with her father’s band of super-powered menaces.

As the episode progressed we got a peak into Skye’s subconscious and how he’s wondering if she’s still the one pulling the trigger, or the target on the other end. She knows S.H.I.E.L.D.’s policy on super-powered people on ‘The Index’, they must either be contained or put down if deemed too volatile and dangerous. She knows this is the routine because she’s helped put someone down before – Blizzard, when he was brainwashed by Hydra.

Skye seemed to have a handle on her powers pretty well until she saw Agent May and Mockingbird taking down Cal’s team. She was reminded what might happen to her if she let the inner monster in her out. By episode’s end it was revealed that she hadn’t learned to contain her powers; but rather just been directing them into herself causing injuring much of her hands.

If Skye ever wants to move forward and actually control her powers, she has to accept that things will never be the same as they were. Things are different. She is different, and the longer she tries to hold onto the past, the more pain she will cause herself and the team at large. Though Skye wasn’t the only one who had to decided where she really belongs.

After being kidnapped and fed pizza by Mack, Hunter must now decide which S.H.I.E.L.D. holds his allegiance. Just like how Coulson caused a Civil War power grab within Hydra a few episodes ago, there seems to be a power grab starting for S.H.I.E.L.D. taking place in defiance of Coulson’s leadership.

We’ve been seeing for a while how Mack is constantly questioning Coulson’s leadership; and it appears that is the main concern of this other S.H.I.E.L.D. In opposite to Fury’s orders, they want their own leader whom we will meet next week played by Edward James Olmos. What this new S.H.I.E.L.D. ultimately wants remains to be seen; but with them willing to take out their own it’s safe to say that even Maria Hill would disagree with them. So whose S.H.I.E.L.D. will Lance side with, his ex-wife’s – whom he loves but is always hurt by – or Coulson, who showed him that sometimes you have to put yourself aside for the greater good – a lesson the new S.H.I.E.L.D. dissenters could use.

NOT One Of Us – Cal & The Emerging Mister Hyde:

While Skye and Hunter were preoccupied with figuring out which side they belong on this episode, Skye’s father found out which side he DIDN’T belong on. In order to bring S.H.I.E.L.D.’s ‘prejudices’ out into the open, Cal put together a team of enhanced humans to stand against S.H.I.E.L.D. Though what Cal failed to realize is that neither him nor his teammates have anything in common with Skye and the other Inhumans. Whereas Skye’s and Raina’s abilities were activated within them, Cal and his team’s powers were all man-made one way or another. Speaking of Cal’s powers, we finally got some more insights into Cal’s rage factor and above average strength.

After the death of his wife, Cal began work on a special serum that could give him enhanced strength, fortitude and other abilities. Over the years he’s constantly tried to perfect it and add little tweaks here and there; but one factor remains – the irrational outbursts of rage. Couple that with his already over the top anger issues, and it’s easy to see why he can’t see the good Coulson is doing for his daughter.

You creepy creepy man you

This is all in reference to Cal’s comic counterpart Mister Hyde – a Hulk-like monstrosity that I’m sure we’ll meet in full sooner or later. With him being cast out by Gordon and the other Inhumans, Cal’s rage could turn towards them and this inspire him to perfect the formula even more. One way or another, I’m willing to bet Mister Hyde will make his rage-tastic debut sometime later this season.

After a season and a half of silent stares and an A+ in badassery, we finally start to get a look into Melinda May’s mysterious past. You might have forgotten some of the things we learned Season 1, like how she hates being called The Calvary and was about to leave S.H.I.E.LD. when Fury asked for her help; but now we got a look into her long hinted at ex-husband. Though I don’t think the May reveals end there.

May’s past has been a long time coming and learning that she loves Vegas and eloped with her now ex –husband isn’t enough. The seeds for more have been set before, and this episode set them again. What happened in Bahrain? Did it have anything to do with an Inhuman/super-powered individual? Considering how Dr Andrew Garner spoke, it seems very likely. Skye is like May’s adopted daughter – or little sister – so I’m sure we’ll get further explanations of May’s past this season as she comes to terms with who Skye has become and whether or not she can handle it. 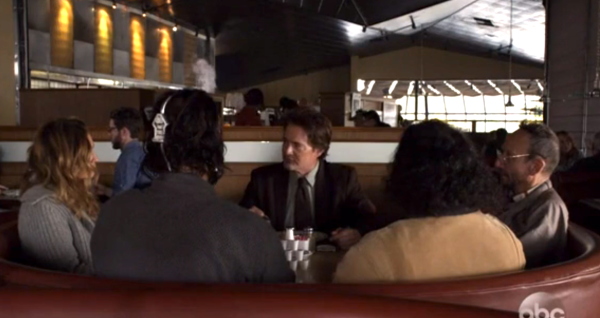 Where is Cal walking off? Who will decide his fate? What does this ‘Real’ S.H.I.E.L.D. want? So many questions left to be answered. Agents of S.H.I.E.L.D. might not be as fast paced as The Flash right now; but it’s certainly holding the market on drama right now. So stay tuned for next week’s episode and the next Declassified!