When people first heard that Avengers: Infinity War was going to be split into two parts (Harry Potter style), they didn’t know what to make of it. After watching Avengers: Age of Ultron, people probably wished that film was cut into 2 parts as well considering how much stuff was going on. In fact, I had to do a massive Declassified article just to scratch the surface! Thankfully, our friends at How It Should Have Ended have it covered with Part 1 of How Avengers: Age Of Ultron Should Have Ended.

“Rather than chop down and cram what we enjoyed into short 15 second bits”, HISHE decided to keep everything and organize them into multiple shorts. Part 2 will be coming out next and quite possibly – hopefully – a part 3 as well. Though before we start thinking about what’s next, let’s look at the HILARITY of Part 1.

If this is your first time seeing a HISHE, then you’ve really missed out. Whenever a film comes out – and even some past classics – HISHE takes different scenes and explains different – sometimes more obvious – ways it could have happened. Such as the fishermen in Jaws simply poisoning the shark or Thor seeing through Loki ‘faked death’ in Thor: The Dark World considering he’s used elaborate illusions in every film he’s been in. So when it came to Avengers: Age Of Ultron, HISHE’s Part 1 deals with Ultron’s initial birth scene and how it really should have went down. 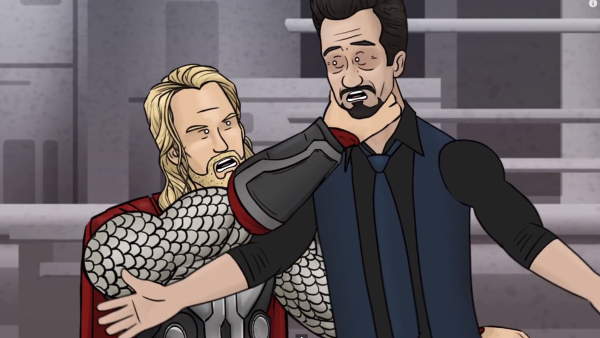 Sure we know that the remains of Jarvis prevented Ultron from doing all this, but seeing what Ultron could do with the full Internet at his disposal is hilarious … I mean truly evil! From bankrupting Tony Stark to making it impossible for them to watch Game of Thrones, Ultron holds nothing back. Similarly, HISHE holds nothing back either as series favorites return in this Part 1 as well.

We find Ultron gloating about his successes in the famous Villains Pub – a running installment on HISHE where all villains can come together and have a beer in peace. Sadly, the Joker realizes too late tht Ultron’s plan will wipe them out too; but it doesn’t end there. The other long – longer – running installment The Hero Café, where Batman and Superman usually have a cup of coffee with the heroes of the film.

This time though, both are caught off guard by Ultron’s asteroid attack. What are these heroes to do? How will Part 2 come into play? HOW DID BATMAN SURVIVE?!?!?

Well the answer to the last one is clearly “Because He’s Batman!”, but the others are answered incredibly by Superman, who is last seen flying around the world backwards at super speed in order to turn back time like he did in Superman: The Movie (1978). This is sure to bring us into Part 2 where everything is reset and HISHE can deal with the middle – end portion of the film.

So Stay tuned for Part 2 and if you never saw How The Avengers: Age Of Ultron Teaser Should Have Ended, enjoy!