After months of speculation – and waiting for the D23 footage to be shown – we finally get some new concept art images for Captain America: Civil War detailing the opposing sides in this film. Siding with Ironman will be War Machine, Black Widow, Black Panther and Vision. As for Captain America will be Hawkeye, Agent 33 Sharon Carter, Falcon, the Winter Soldier and Ant-Man – look at Hawkeye’s shoulder!

Although while the art is awesome, it seems to have caused more questions than answers as some of the images contradict earlier releases. Where’s Scarlet Witch? Wasn’t Black Panther neutral? Why would Black Widow betray Captain America and side with Stark? What’s that little flying thing next to Falcon?

Well fear not readers because I’ve got answers and theories – I’ll specify which is which – so let’s take a closer look at these Official Concept Art pieces and what they can mean for Captain America: Civil War. 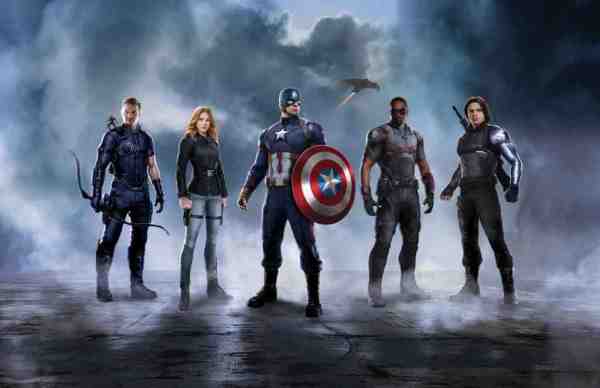 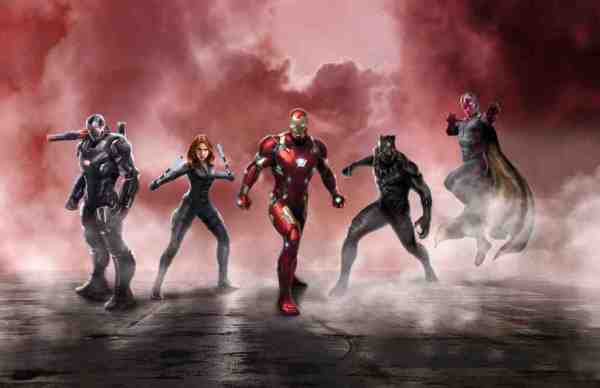 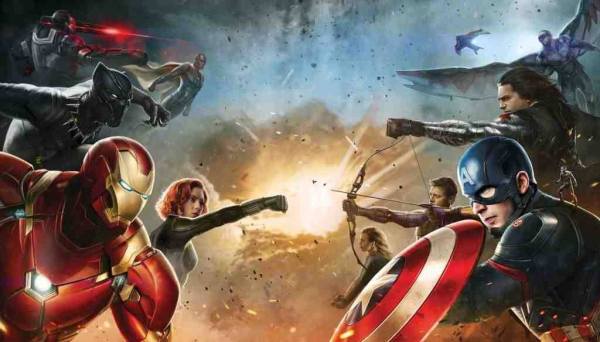 Ant-Man & Red Wing – The Hidden Gems Of The Concept Art:

As you look over the images, you probably just saw the “Who’s Who”. If you took a closer look you might have even noticed Hawkeye’s new costume – complete with a knife holder in the boot. Though the two biggest secrets of the concept art images are in fact the ‘smallest’ of additions.

As I mentioned earlier, by looking closely at Hawkeye’s shoulder in the first image you can see Ant-Man. Personally, this REALLY makes me hope a moment pops up in the film where Ant-Man jumps on one of Hawkeye’s arrows and gets fired for a Super Velocity Punch. Beyond this, you can also find Ant-Man in the 3rd image, but this time he’s on Cap’s shoulder – although he isn’t the only partly hidden member of these images.

As you could probably see, there is what appears to be something flying behind Falcon. So what is it, a new Quinjet? That doesn’t make any sense. Well it’s not a Quinjet in the distance, but rather a small remote controlled drone. In case you couldn’t put it together, this is the MCU version of Red Wing, Falcon’s sidekick. In the comics he’s usually an actual falcon, but that would be rather tough in the MCU and a high tech drone does make much more sense given Falcon’s background. Additionally, after that battle with Ant-Man in Ant-Man, Falcon might be open to having some additional eyes on the surroundings in case his tracking goggles get taken out in a fight.

The biggest question of this art is probably “Where is Scarlet Witch?”. We initially heard that she would be on Team Cap, which makes sense given her feelings toward Tony Stark. So why is Sharon Carter there and not Scarlet Witch? We know Scarlet Witch is in the film since she was a member of the new Avengers AND because we saw her on set during the Crossbones fight. So why isn’t she here?

Well my theory is that these images are only detailing who is on whose side during the main action of the film. We’ve heard how another international incident with the Avengers causes the division of Superhero Responsibility. This is in keeping with the comics, but we’ll need someone already existing in the MCU to cause this problem – rather than intro a new character just to have them mess up and the Avengers pay. This makes me think that Scarlet Witch might be that character.

Think about it, Scarlet Witch’s powers are tremendous and if she mishandled something – even slightly – the results could be disastrous. That fight with Crossbones could be that battle and the aftermath causes Scarlet Witch to be detained and a body known as “The Accords” set up to govern the other heroes. As we saw in the Ant-Man Post Credits, this will get more complicated for Cap when the Winter Solider appears. It is THAT idea which will really divide the teams on ‘playing by the rules’ or ‘playing for freedom’. So why is Vision with Tony?

Vision has the Mind Gem and is a very rational orderly being. If Tony is playing by the rules to help Scarlet Witch, Vision might side with him thinking that this is surely the best way to free her. Vision’s allegiance might change though should Tony’s hatred for The Winter Solider reveal him to be too irrational to take things reasonably. This isn’t to say Vision would betray Tony, but rather just walk away from the whole thing – hopefully with Wanda. Though I suspect Vision might not be the only one to walk away as Tony’s anger rises.

Black Panther Side With Tony Stark?:

To be fair, saying Black Panther sides with Tony Stark over Captain America is kind of misleading. In the comics, Black Panther and Captain America are strong allies and trust each other quite a bit. So why is it so different in the MCU? Well as I brought up in one of my recent articles, there’s word that Black Panther has a score to settle with the Winter Solider. Tony Stark of course has his own score to settle with the Winter Solider if the hints of him having killed Tony’s parents are indeed true. 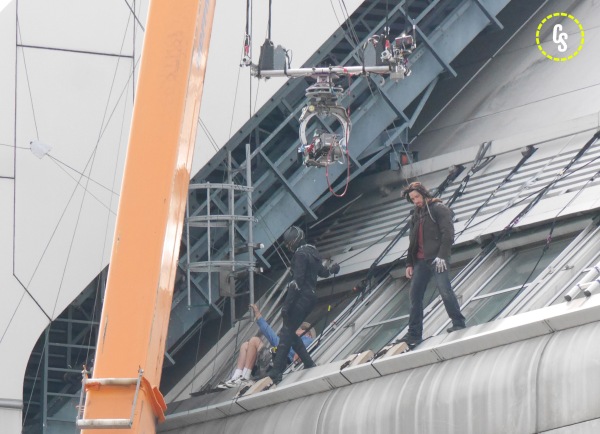 So in the end, it’s not so much Black Panther and Tony Stark are allies for shared belief, but more of a “mutual goal”. This film is only supposed to serve as an intro for Black Panther so I don’t see him having too much time. The way I see it, he and Captain America will come to an understanding after the Winter Solider vs Black Panther vs Captain America fight scene we saw filming a few weeks back. With an agreement reached, yet another member of ‘Team Stark’ seems poised to leave. Though beyond all these members leaving, none of them will really ‘betray’ Stark; but rather turn neutral. The honor of “betraying” might be reserved for Team Stark’s most unlikely member.

When we learned that Black Widow and Hawkeye would be on different sides of this fight, it would make sense that Black Widow would be on Cap’s side. For starters, she’s never gotten along with Tony and she developed such a strong bond with Steve Roger in Captain America: The Winter Solider. So after all those warm and fuzzy moments, WHY is she standing against him? Well my theory is that she’s not so much “standing” as she is “sneaking”.

This wouldn’t be the first time Black Widow played a “triple agent” against Tony Stark (Ironman 2). So pairing that with her strong ties to Captain America, I’m willing to bet that she’s on Tony’s side as “the inside woman”. This also helps with the Hawkeye vs Black Widow fight rumors where they question if they’re still friends “depending on how hard [she] hits [him]”. The fight sounds for show and Black Widow’s specialty is sneaking. So I’m willing to bet they’ll be a part in the film where it’s revealed that Natasha has been watching their backs all along.

Last but not least, many have wondered why there is no sign of Spider-Man in this image. Whereas initial reports had Black Panther as neutral, Spider-Man was shown to be on Team Ironman. So why the change? Well there are two possible explanations for this one. For starters – as I mentioned with Black Panther and Scarlet Witch – these images probably only reflect those involved during the main antagonistic battles. Yes, Spider-Man has a rumored fight scene, but due to the amount of shooting done he probably only has a small part in one of the final battles.

The other reason for the ‘hidden Spidey’ most likely has to do with the veil of secrecy around his new character design. Peter Parker’s initial costume will be unlike anything we’ve seen before. Sure the film is supposed to end with him getting a new costume closer to his iconic one; but that would also be a spoiler since a few parts are bound to change. Much like The Wasp in Ant-Man, we’ll most likely have to wait for the film.