Now that Star Wars: The Force Awakens is out, the most-anticipated movie now is easily Captain America: Civil War, which many have already called “Avengers 2.5.”

Marvel recently released some concept art for the movie that shows members of Captain America’s and Iron Man’s respective “teams” fighting it out in a number of one-on-one battles. For those unaware, Hawkeye, Scarlet Witch, Winter Soldier, Falcon and Ant-Man fight with Captain America while The Vision, Black Panther, Black Widow and War Machine join Iron Man.

Everyone is fighting someone, except Hawkeye who is off by his lonesome, aiming at ostensibly nothing. However, Internet sleuths believe his opponent will be the one and only Spider-Man. Spidey is already confirmed to be in the movie, so that prediction is not going out on a limb. If the concept art holds true, he’ll be teaming with Iron Man in the battle against Captain America. That could be an interesting plot point that moviegoers will want answered when the movie opens on May 6, officially kicking off the summer blockbuster season. Spider-Man’s affiliation is one of the movie’s big secrets as Movie Pilot explains. 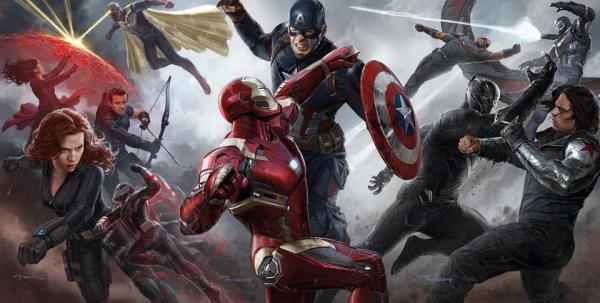 The fact that all this speculation comes from a single piece of concept art is nothing short of astounding and truly shows how much popularity Marvel films have today – and everyone from stationary to online gaming is getting in on the hype. Take Betfair for example, which has added multiple games all focusing on Ironman, Captain America and various others set to take the stage in Captain America: Civil War. And with the Marvel Cinematic Universe (MCU for you cool kids) already the highest-grossing film franchise in both the United States and worldwide, you can be sure more themed games are sure to follow – especially as the universe expands beyond the borders of Marvel Studios. Captain America: Civil War is only the first of 11 movies planned over the next four years to highlight members from MCU, including another Thor movie, two more Avengers movies and a Guardians of the Galaxy sequel. But there is also an untitled Spider-Man film on the docket.

As Feige alluded, could Captain America: Civil War lead Spider-Man to essentially defect from the Avengers, choosing to go it alone which sets up that movie? That’s one theory that makes a lot of sense, both in terms of storyline and setting up possible movies. For the longest time, no one believed Spidey would appear in Marvel movies after fights with Sony over licensing rights to the character. After the two most recent Amazing Spider-Man movies fell flat after the original trilogy starring Tobey Maguire, Sony reached an agreement to essentially loan out the character for other Marvel projects.

It looks to be a win-win for the pair as Sony can benefit from Spidey being in some of the biggest movies currently being made while Marvel gets to bring in a character it created long ago. It’s no wonder fans are excited over the character’s role in Captain America: Civil War. Who knew a simple piece of concept art could create so much speculation?

One thought on “The Far Reaches Of Marvel Movie Hype – Speculation, Marketing & Partnerships”