By now you’ve probably realized that the world is full of amazing Cosplayers; but there are some that take it to an entirely new level. Cosplayers that are able to go beyond what anyone thinks is possible and become something beyond compare. This month’s Cosplayer is one such fellow. You’ve probably even seen some of his photos floating around the Internet; but very few actually know who he is!

When someone makes things this incredible, they need to be credited and admired. Yet many share these photos without giving any credit at all and that’s a travesty! So I decided to hunt down this Master of Mechas so that everyone can know that he isn’t a myth! He’s a living legend! And his name is Clive Lee Cosplay!

The inherent difficulties with Mecha Cosplay are basically the same as any Armored Cosplay – just to a much higher degree. The majority of Mecha Cosplay suffers from problems in proportions. They might look humanoid, but depending on the make and style – ie: Gundam, Zaku, Transformer, etc – the costume could call for unrealistically disproportioned body parts. You might be able to make a model of it, but fitting yourself inside is another story. That is why when most people attempt Mechas, the proportions seem off. By making them humanly wearable, they compromise the look of the original character. And even if you could somehow keep the look accurate, you would then have to worry about making these Mobile Suits actually mobile!

So how does Clive do it? How can he make these Mecha Cosplays completely screen accurate in terms of look and proportions, while still being able to fit inside and move around? The answer is years and years of trial and error!

Follow his progress from Bottom Left to Top Right

Back in 2000, Clive belonged to his University’s Anime Club where one day an upperclassmen showed Clive some photos of a local cosplay event. He fell in love with the idea instantly and began plans for his first Mecha Coplay (Gundam RX-178 MK II) for the following year. Over the years, he’s made an average of one suit per year – sometimes doubling up – but when you place them all side by side, the evolution of his work is simply stunning. Even when Clive looks back he can’t get over how far he’s progressed – sometimes feeling that his previous works “are not up to standard”. Though despite that, he’s always thankful for when a costume is completed and wonders how he ever made it through the long and “torturing” process. 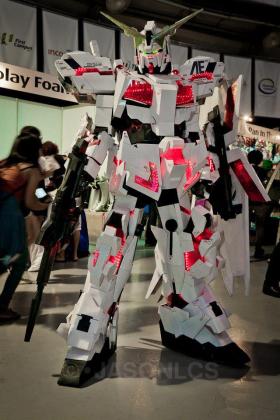 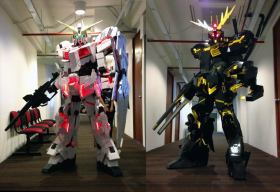 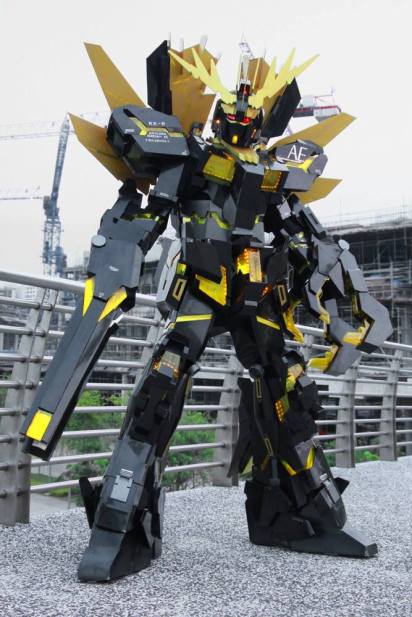 Over the years, Clive has thought of Mecha Cosplay less as ‘armor making’ and more as “tailoring” of sorts, with each piece carefully crafted to maximize mobility while also retaining the proper proportions. Although a true artist doesn’t just stop there, but pushes the boundaries even further – and so too does Clive with his spectacular Electrical work.

With everything else mastered, Clive started adding lights to his costumes if the Mecha itself had them as well. As you can imagine, this leads to some stellar sights. His recently completed Star Build Strike Gundam goes from impressive to mesmerizing when the lights go out and the suit comes alive! Although the best display of this has to be his Gundam Unicorn 02 Banshee (seen above), which also happens to be his favorite costume. Between its size and perfectly placed illumination, Banshee stands as a very “menacing but interesting” character day or night. 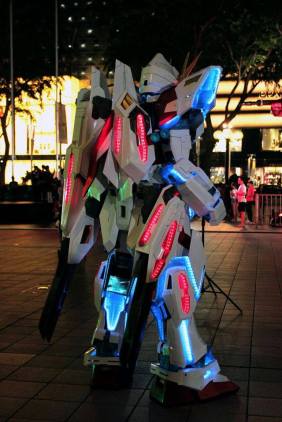 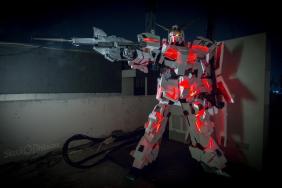 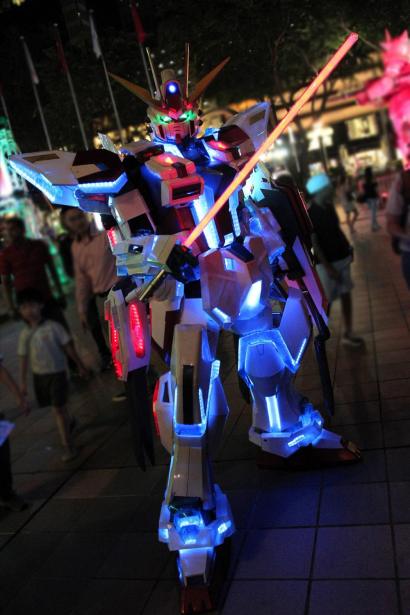 So what’s next for Clive? Well next he plans on going back to the beginning and building the first Gundam – RX-78. Though beyond that, he’s completed all the Mecha suits that he’d like to build. Right now he’s “just waiting for the new Gundam anime series to see if there is anything interesting to build”. Though Clive’s story doesn’t end there. As I said at the beginning, he’s a Legend and there’s much more to tell!

About once every year, Clive also works on non-Mecha Cosplays. And as you can imagine, these non Mecha cosplays are just as detailed and impressive as some of his Mecha suits. Take his Diablo costume for example, which might look part-Mecha, but is actually a completely different form with an EVA foam base – rather than corrugated plastic. Despite the changes in style, there is still an unbelievable amount of detail put into this and other non-Mecha Cosplays he’s done. 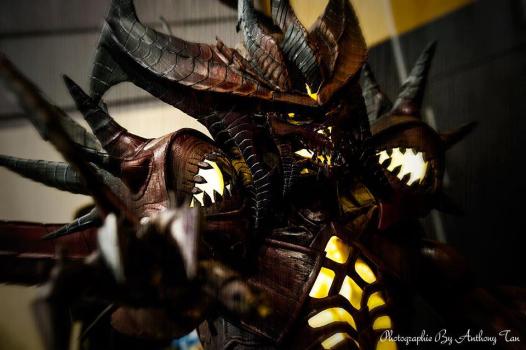 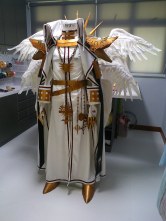 This year, he’s planning on an Akuma costume from Streetfighter IV if he has the time. Although when push comes to shove, Clive still prefers Mecha Cosplays. As much work as the might be, the tailoring associated with non-Mecha Cosplays is more stressful to him. He’s much more comfortable working with plastic and stuff like that. Though whether it’s Mecha or non-Mecha, Clive’s work always starts with the same thing: Passion.

Though Clive’s ‘Passion for Cosplay’ hasn’t just helped his costumes, but other aspects of his life as well. For starters, Clive works in Game Design and even gives University level lectures on the subject. Thanks to his cosplay work, his in-game character designs have become more grounded and real – especially their costumes. But the most heartwarming result of Clive’s Cosplay has to be meeting his wife. They first met at a Cosplay Event in 2001 and instantly bonded over cosplay. Though this love story gets even more amazing in 2011, when they finally tied the knot in a Cosplay Wedding. *Cue aww moment* 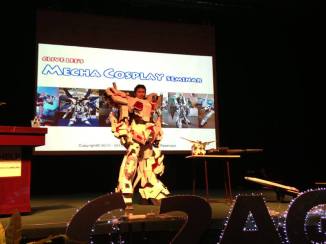 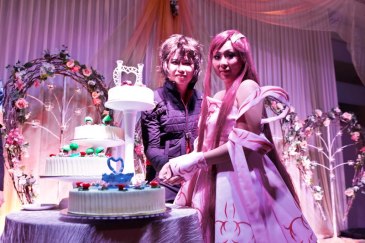 I didn’t intend for these final 4 months – September to December – to be a part of our World Tour Of Cosplay; but Clive is our first Cosplayer from Singapore and Asia in general. So I asked him to describe what the Cosplay scene is like over there. Surprisingly, “Singapore does not focus a lot on armor and Mecha cosplay”, but rather on photoshoots in general. That being said, there are parts of Southeast Asia that do have a strong Mecha Cosplay scene. Though whatever the scene, Clive has gotten acknowledgements over there for his work and has even been asked to give seminars on Mecha Cosplays as well as judge contests! And just like with everything else, Clive takes his role as judge very seriously.

“Being a judge gives me the opportunity to look at cosplay performances up close and I really enjoy that. I look out for a series of things like craftsmanship, performance and technical stage directions according to a set of rubrics I have devised. Being a judge can be pressurizing at times because I need to ensure that my cosplay standard is worthy for that of a judge. The good side of it is that I feel that my works are being recognized.” – Clive

Clive doesn’t get to attend Conventions outside of Asia too much – it can’t be easy getting those suit through customs. But he did get to attend SunnyCon in the United Kingdom and loved the “passion of the community”. As far as would he ever like to attend a Convention in the US, Clive would definitely like to add it to his list. He’s always fascinated by Cosplay Culture and loves to see how things are from place to place. Well if he ever does attend a convention here, I’ll definitely try to make it – and hopefully you will too now that you can place a name to the Legends!

Before we end, I’d like to thank Clive for taking time out of his busy schedule to work with me on this. I was really honored to write this article because I’ve admired these costumes for some time, and it was wonderful getting to chat with the genius behind them. So I hope you enjoyed reading this article as much as I did writing it! And if you want to keep up with Clive’s latest projects, you can Follow him on Facebook and DeviantArt! Let’s give this man the following he deserves! So see you all next time and enjoy this video of his Star Build Strike Gundam in action!

*All Photo Credit goes to their original takers including, but not limited to Alvin Tak, Jason Trooper, and Moments Photography.