Last month we got to chat with Clive Lee, a Cosplayer whose attention to detail has brought many Mecha – and non Mecha – Cosplays to life like never before. But now it’s October, and Halloween is quickly approaching! It’s a time where even non-Cosplayers like dressing up in costumes. So I could go the ‘spooky’ route, but instead I choose to continue the theme of incredibly transformative Cosplay. And whereas this month’s Cosplayer might have only started a year or so ago, her passion and talents for costumes have grown ever since she was born!

Like Clive, I’m sure you’ve seen some of her photos floating around the Internet, but chances are that you didn’t know who she was. You might not have even known she was a ‘she’. Wait, what? You heard right! So let’s sit down with a Cosplayer whose makeup skills might be too good! Allow me to introduce you to the extraordinary Alyson Tabbitha!

If you look at her Facebook page, it says Alyson started Cosplaying in 2014 – which is true. Every now and then she’d see photos of awesome Final Fantasy Cosplayers, but never knew much about it or conventions until her friend Raven invited her to Megacon 2014. Alyson immediately began work on a Lightning Farron costume from Final Fantasy: Lightning Returns, a complex endeavor for even experienced Cosplayers. But even though this was Alyson’s first “Cosplay”, it was far from her first costume!

Since Alyson was a baby, her mom would always make her Halloween costumes. In fact, even before Alyson was born her mom and dad would always enjoy dressing up! You see Alyson’s mom was a professional character performer. So growing up costuming was always a part of the family; and Alyson’s amazing mom made sure to pass that knowledge and passion onto her kids! It is these skills that Alyson has brought into her Cosplays and she’s even gotten her brother and sister into the fun as well.

When asked about it, Alyson thinks “it makes her [mom] happy to know her adult kids not only are still best friends and learned many skills from her, but also participate in such a fun and innocent hobby together.” As of the moment, Alyson’s mom has yet to go to a convention with her kids; but maybe 2016 will be the year. Either way, they make it a point to attend Mickey’s Not So Scary Halloween Party every year as a family tradition.

Age 14 and now – Trial and Error at its best

Whereas Alyson’s costume skills are incredible, it’s her makeup skills that really set her apart. Though unlike her costumes, this skill is actually something she’s developed on her own over the years, and it all started with Captain Jack Sparrow. In fact, since she was 14 Alyson has redone this costume every year, learning something new and improving each time! And she’s used all that trial and error to not only perfect her Jack look, but also create many new looks for other costumes.

Considering all the time she’s put into it, Alyson in many ways considers Jack her first costume – even though it did start with help from her mom. Though she’s redone it so many time that is has certainly become “hers” – especially in her heart.

“Well Jack is just a fun character to be, he’s one of the few costumes that when I put it on, I instantly get into character, kids and adults alike love him. And after several years of dressing as him – and me being a huge pirates fan since I was a young girl – he really has a special place in my heart.” – Alyson

But Alyson’s heart is big enough for two favorite characters. As I mentioned earlier, Jack might have been her first “costume”, but her Lightning costume for Megacon 2014 was her first “Cosplay”. This wasn’t just the first time she did a costume completely by herself, but it was also her first time experimenting with armor working. She didn’t even resort to ‘Tutorial Videos’; but instead wanted Lightning to be the culmination of everything she’s learned over the years and figured out the rest as she went. And spoiler alert, it came out AWESOME!!!!! 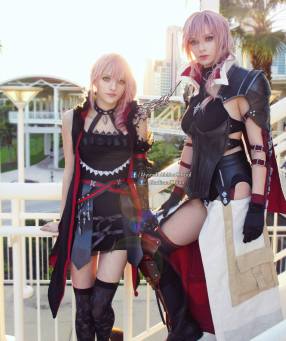 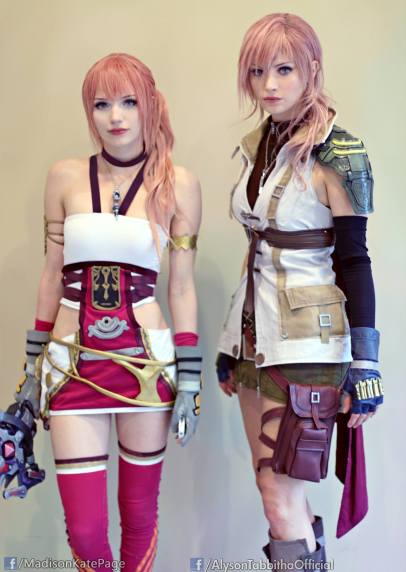 Again, Alyson has been a Final Fantasy fan for quite a while and whereas there’s been some female leads before, Lightning Farron was the first she really connected with. After all, she didn’t just admire how “strong and inspiring” Lightning is, but also connect with her on a sisterly level as both Alyson and Lightning have the role of “big sister” in their family. This is probably another reason why Alyson and her younger sister Madison make the perfect Lightning and Serah duo! And it’s not just this panda that thinks Alyson’s makes an awesome Lightning, but also Ali Hillis – the actress/voice actor of Lightning herself!

“Oh my gosh when I found she shared my photo I squealed, then ran around telling my family and friends, then it turn to happy ugly sobbing. lol It just meant so much to me! … I just feel lucky for Alli to even notice me!” – Alyson

Alyson might not have many costumes, but each one she has is incredible! So how does she decide whom to Cosplay next? Well as it turns out, it’s not something Alyson usually puts much thought into. Sometimes she’ll see a character and then “it just clicks with [her]”. Though that might not be the best option anymore as recently Alyson worked on a Cosplay because she liked the character’s look, but that was it. As she says, lesson learned and now she makes sure she likes the character as a whole. Though when it comes to picking her “type”, there’s definitely a common theme.

“It’s funny cause I realized I usually am attracted to being the cool, calm and collective/ tall, dark and mysterious characters – sometimes with depressing backgrounds. For some reason I really sympathize with them. Or maybe just want to be like them lol I am anything but the cool, calm, mysterious type. I’m just a derp. Haha” – Alyson 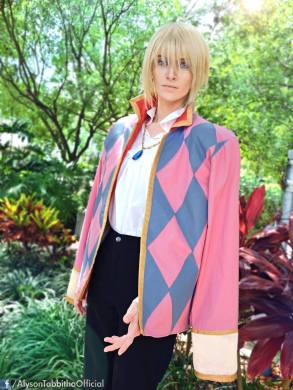 Well even if that’s true, she’s our favorite derp! Though in a sense that’s what Cosplay is all about! Cosplay gives you confidence not only in your abilities but also in who you are – which is strange because you’re playing someone else. But this is truly the greatest thing about Cosplay, which some people seem to forget sometimes –but not Alyson! In fact, I think she summed it up best:

“Despite constantly dressing as people that aren’t me, I have never been more myself than I am now. I use to always want to seem cool, and reserve my goofiness. Now I embrace my derpyness and am not ashamed of playing dress up as an adult. I’m happy! I meet friends through this hobby that accept me, and my life has really taken a turn for the best.” – Alyson

Alyson says she “had no idea how wonderful this hobby was when [she] first jumped in!” Whether you do it to make new friends, try something new, make something you never knew you could, or simply just get out of the house, there’s something in it for everyone.

“There’s really no ‘required’ reason to Cosplay other than simply wanting to… So as long as someone wants to try Cosplay, they should!! They can then find their own personal reasons to keep doing it along the way” – Alyson

As you can imagine, Cosplay has pretty much taken over her life, but she still makes time for friends and family of course. Though when she’s not Cosplaying, Alyson makes jewelry, sculpts statues and even sells her artwork online sometimes. In fact, she hopes one day to professionally sell these at conventions. Otherwise, she’s currently trying to make time for Airsoft and get better at uploading things to YouTube. Though Cosplay is never out of her mind for long and she’s planning some pretty incredible things!

At the moment, Alyson has over 10 Cosplays on her waiting list. If she has time before Halloween, she’ll try to make a quick costume of Padme from Star Wars. As for her next convention, that will be Holiday Matsuri, which is a festive Anime/Gaming convention held in Florida mid December. For that one she’s planning a Gaara Cosplay from Naturo and possibly one other – but that ones a surprise. This panda of course tried to dig deeper for the scoop, but alas – all I know is that it’s its from a film and is a pretty well known character. Though before I could figure this one out, I was hit with an even bigger mystery!

It turns out that Alyson has an “Ultimate Dream Cosplay” and it’s BEASTLY – seriously! This won’t be a simple wearing costume, but rather a hulking beast that she will try to construct like a giant wearable puppet. Alyson clearly has never attempted anything like this – which is why it’s a dream Cosplay – so she might enlist some help from her friend Corey (aka Grand Artifice) who does incredible monster and other large-scale costumes. Again, I tried to see what I could learn beyond that; but I know what it’s like to have an “Ultimate Dream Cosplay”. So I’m perfectly fine with waiting and seeing her dream Cosplay come true!

So if you’d like to keep up to date with all of Alyson’s works and/or cheer her on, you should go check her out on Facebook, Tumblr, Twitter and her growing Youtube page where she’ll post tutorials. And if you want to see what the rest of the Cosplay Family is up to, feel free to check out the Facebook Pages for her sister Madison and her brother Michael!

*All Photo Credit goes to their original takers including, but not limited to Madison Kate, David Ngo and Stephie Joy