So Jessica Jones – the second installment in the Marvel’s Defenders series – has finally premiered on Netflix; but how good is it? If you’re familiar with the Daredevil, then you’re already expecting this to be a darker and grittier series than Marvel usually puts out. And whereas this series certainly is dark, that’s about where the similarities end.

Jessica Jones is a series almost completely unto itself. And whereas some similarities can be traced to its predecessor, you have to remember to take this series on it’s own merits as well. Is it going to be as well paced or have as tight nit a story as Daredevil? No; but it’s still a powerful series with some incredibly compelling characters and moments!

So without further to do, here is a SPOILER FREE Review of Marvel’s Jessica Jones.

The Pros & Cons Of The Private Eye Genre – Style & Pacing:

As I was saying earlier, Jessica Jones certainly inherits the “darker” tone from Daredevil; but I wouldn’t exactly call it gritty. You’re not going to see scenes as bloody as Daredevil; but what you will see is a lot of psychologically uncomfortable moments. Remember when we saw Wilson Fisk’s childhood or his un bridled rage in smashing that guys head in a car door? Well the majority of this series has that level of emotional fever. Between the flashbacks (both Jessica and Kilgrave) and the effect Kilgrave’s powers have on people, there are a lot of disturbing moments in this series that truly make it a psychological thriller in the best sense.

Another noticeable addition to this series is the higher number of sex scenes. They aren’t Full Nudity obviously; but they are certainly FAR more explicit and widespread than anything we’ve seen from Marvel before. Though more curious is how these scenes seem to populate the early half of the season only and then almost completely disappear towards the end. It’s this divide that hints at the most noticeable aspect of this show: the pacing. 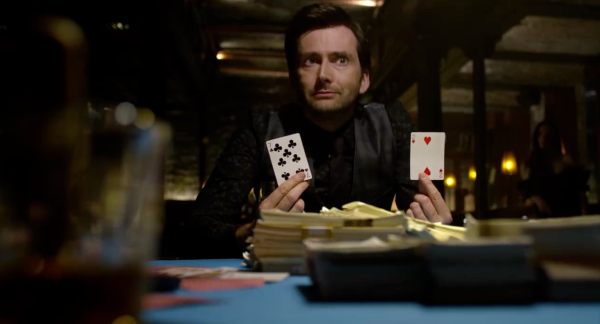 Daredevil slowly builds up to a fever pitch as each episode gave us more and more pieces to the puzzle. Not a moment was wasted and it took full advantage of it’s short season. Jessica Jones on the other hand will tease you with a confrontation and then pull it away. There will be multiple moments when you think the tide is turning and then something goes wrong. This is of course the staple of any psychological thriller; but Jessica Jones might do it a little too much.

I’ll express this more in my Season 1 Analysis; but there will be multiple moments when you know something will be messed up because there are 8, 5 or 3 episodes left. At many times it feels like 13 episodes might have been too long a run to tell such a story and so they had to add in multiple complications to drag it out. Sometimes these were worthy choices; but other times they’ll just leave you screaming at the screen – or more specifically the character that just ruined everything in one second.

From Annoying To Epic – A Mixed Set Of Character:

Whether a main character, supporting character or villain, Daredevil tried to show that everyone has the potential to “be a hero”. Jessica Jones on the other hand does the complete opposite and tries to show that everyone has the potential to be a total failure. Character are mainly introduced in this series to get in the way more than help and other characters – no matter how perfect they seem at the start – will find incredible ways to fail. Any problems with this series can ultimately be traced back to this fact as even seemingly comic relief characters end up MAJORLY screwing things up and worse still wasting a lot of time. Though no matter how bad these characters are – and trust me there are two you’ll REALLY hate – don’t let them take away from the great characters this series brings.

Jessica Jones is a wonderful hero who is just trying to find her way and balance surviving with doing good. Sometimes she’s an even more identifiable character than Matt Murdock. Additionally, Luke Cage is just fantastic. His story is full of mystery and intrigue, and there’ll be some plot lines tying the two together that lead to some INCREDIBLY well acted moments by both. If the series was cut down to maybe 8-10 episodes and dealt more with these two, then the series would probably be even better than Daredevil.

Though a series isn’t series unless it has a great villain, and Jessica Jones does it again with Kilgrave. David Tennant brings all the charm and charisma he brings to other roles; but this time uses all of it for evil and it’s truly a sight to see. Whereas Vincent D’Onofrio’s Wilson Fisk walked the line between good guy and bad guy for more of Daredevil, Jessica jones introduces Kilgrave as a monster from the get go. And in keeping with the ‘opposite of Fisk’ mentality, the series will then take us to a place where we don’t know whether to hate Kilgrave or help him.

This series of course has Easter Eggs; but don’t expect them to be as plentiful or apparent as they were in Daredevil. After all, this series is based off of Jessica Jones and the Alias comics, a series most people have likely never heard of before this series. Though despite these sparse Easter Eggs and references, this series did a wonderful job of prepping the stage for the Defenders series and more importantly the upcoming Luke Cage series and even Season 2 of Daredevil.

In this series we see Jessica and Luke work together and get our first look at how a super power team up TV show could work in the Marvel Netflix universe. Though beyond this, we also get slight hints as to what lies buried deep in Luke Cage’s past – and what lies in store for his own series due out a late 2016. Additionally, a familiar face from Daredevil will make an important appearance later in the series, which will not only tie Jessica Jones to Daredevil, but also serve to give us a few hints as to what’s in store for Daredevil Season 2 – but again, I’ll deal with these more in one of my upcoming Analysis Articles.

In the end, Jessica Jones seems to be a series of “But”s. On one hand it had incredible characters; BUT they were sometimes lost in a sea of infuriating ones. The story’s pace perfectly demonstrates psychological suspense; BUT the ending does feel a little flat and possibly contradictory. She’s supposed to be a ‘Hell’s Kitchen Vigilante’; BUT the majority of the series takes place outside of Hell’s Kitchen. Will you regret watching this series? No, it has some amazing moments and the characters of Jessica, Killgrave and Luke are very fun and well written; BUT… there’s all the “But”s.

Regardless there are still a lot of moments in this series to talk about and analyze, so stay tuned for my upcoming Easter Eggs, Season 1 Analysis & Set Ups and Jess’s NYC articles.