Arrow returned last night and began to deal with the fallout of last week’s shocking revelation – but that’s not all. We also got one of the few non-Oliver centric Flashbacks, but the focus of the flashback wasn’t Diggle but … Andy? It was a time for everyone to drop off the grid and deal with their pasts. So let’s take a Closer Look at everything that happened and what this could possibly mean for the rest of this season.

In case you didn’t know, A.W.O.L is a military term for when someone is “absent without official leave”. Basically it means they deserted their team and we saw this on two major fronts this episode. In the flashbacks, we saw how Andy’s demons resurfaced and eventually started to go A.W.O.L in favor of Shadowspire and other devious organizations. In the present, we saw how Felicity slowly started to shrink away from the team while she dealt with her demons. Thankfully when the chips were down, both came back into the fold and fought for their family and friends – but I’ll discuss this more in the next section.

The final thing of note here is that A.W.O.L sounds like “A Wall” aka Amanda Waller, who was an extremely surprising death this episode. Let’s face it, Waller has never been the kindest of individuals, but everything she did was always very calculated. So it’s hard to believe that she didn’t see this coming. After seeing her slip Lyla the secret files, it’s entirely reasonable to believe that her final moments and word choice was specifically crafted as well. Did Waller actually offer to sacrifice herself rather than let Lyla die? We may never know, but it’s nice to think that even the woman who once “tried to take down the city with a drone strike” could have a humanizing moment of redemption in her final seconds. 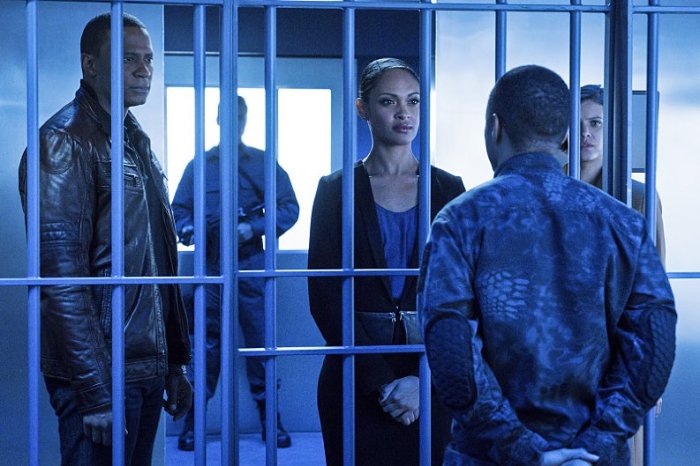 “Making Sure The Past Stays The Past” – Felicity & The Diggle Brothers:

As I began to mention in the last section, this episode kicked off with scenes of Felicity and Andy dealing with their demons and going “A.W.O.L.”; but as the episode resolved we saw how each made sure to put their past where it belongs – in the past. Felicity was besieged by her younger more angry/edgy self who berated her for trying to play superhero and wearing a mask to disguise her true self. Her old self – let’s call her Goth-icity – feels that Felicity abandoned her courage and strength to just sidekick. I’m sure the meds didn’t help, but this hallucination drove Felicity to remember why she got into what she’s doing now and remember she IS strong and confident. Maybe not in the way Oliver and the others are, but without Felicity they’d be nowhere. So with this new resolve, Felicity was able to jump back into action and earn the Codename “Hotwheels”… I mean “Overwatch”.

Andy on the reverse side had dual parts of this episode storywise. We’d already seen Felicity’s past self but it was now time to see Andy’s. We got to see how the Diggle brothers were when they first went to Afghanistan and how Andy was a hero – but he did still have a streak of ‘make a profit’ in him. We got to see their brotherhood but also John looked at his brother as a criminal. In the present we saw how their brotherly bond slowly kept growing – from burgers to pork roast – as both were put in a situation where they had to believe the bond of brothers still existed in order to save Lyla. Thankfully, Andy’s ‘profit’ ways seem to remain in his past as well as he and John are able to turn the tide and save Lyla. By episode’s end, Andy is welcomed fully back into the family and meets his niece – a very heartwarming moment of course, but also one that makes me REALLY worry that John Diggle is the mystery grave.

Looking Ahead – The Diggles & Felicity:

Remember John’s original story: he was the man who tried to fill the void in his brother’s family’s life when his brother was reported dead, and tried to hunt down his killer. This season, Diggle has not only discovered the truth about his brother; but now he’s started to make peace with all of it. Even more suspect is how this episode ends with Andy meeting John’s wife and child. IF that mystery grave belongs to John Diggle, it would not only explain why both Felicity AND Oliver have changed their “no kill” policy – since he’s been with them since season 1 – but would also offer a strange moment of tragic parallelism. It will now be Andy who will have to fill the void for Lyla and Sarah, and try to bring his brother’s killer to justice. Though this isn’t the only potential foreshadowing this episode.

With the return of Goth-icity and Momma Smoak being more of a series regular, I can’t help but think that more of Felicity’s past is going to come calling. The next episode will introduce the villain “The Calculator” and the episode afterwards is called “Sins of the Father”. Could it be that the Calculator is Felicity’s long lost father? This could explain her former self having a real problem with authority. Additionally, the Calculator’s – Papa Smoak’s – arrival in Star City could be a result of hearing that his daughter got injured. These might just be theories for the moment, but in the coming weeks we should pay close attention to all these hints. Something is coming and we’ll need each puzzle piece to truly appreciate it.

So on the simplest level, this reference could have just been an Easter Egg to the famed Batman character, Oracle who was Barbara Gordon after she was left paralyzed from the waist down by the Joker. Though on a deeper level, we get one of two possibilities:

So which explanation do you believe? Personally I’m going with option 2. The Arrowverse writers have always been great with meta-references and jokes.