In case last week’s episode didn’t do it for you, this week’s episode of Arrow kicked things off with a bang now that Darhk has returned front and center. From big revelations to stunning fight scenes, this episode kept us glued to the edge of our seats before knocking off them with one of the biggest – non death – cliffhangers ever.

What kept this episode together? What’s coming next? Thankfully this panda is under no such “code of silence. So let’s take a Closer Look at Arrow “Code Of Silence” and look ahead to see what’s coming next.

To Keep Or Not Keep The “Code Of Silence”:

As you could tell by the episode title, this episode was all about keeping secrets… oh wait, isn’t that what every Arrow episode is about? Well this time is was ‘keeping a secret’ to protect someone you love… wait, that’s also every episode. All joking aside though, this episode specifically dealt with whether the secrets you keep – for whatever reason – will be worth the revelation or cause unintended fallout. Curtis’s “secret wedding gift” for Felicity sort of encapsulated this perfectly. Upon the first revelation of Curtis working on something (apparently a Felicity screensaver), he knew keeping it secret could result in him being fired – especially for telling his boss “none of ya business”. Though in the end, his surprise gift is what will give Felicity the ability to walk again, which I’ll discuss later. The point here is to frame that secrets can go one of two ways – unintentially fired or working out to make things stronger than they were before. And we see (possibly) both of these scenarios playing out with Quentin and Oliver this episode.

On one side of the spectrum we find Quentin – who in recent episodes has once again become a perfect foil for Oliver. The argument can even be made that Quentin’s opinions of Oliver usually reflect Oliver’s opinion of himself – but that’s an analysis for another time. The point here is that Quentin has found himself in a very Oliver-esque spot, ‘lying to a loved one to keep them safe’. Quentin’s problem is two-fold: 1) he’s trying to distance himself from Donna Smoak so Darhk won’t hurt her 2) he’s also ashamed of himself for even getting involved with Darhk in the first place. Thankfully though, in the end Quentin comes clean and Donna sees that the secret was kept to protect her and that even his allegiance with Darhk was to protect someone as well – Laurel. All in all, everything worked out well for Quentin; but Oliver MIGHT not be so lucky!

As we saw in the Arrow/Flash crossover earlier this season, the secret of Oliver’s son is a pretty hot button issue. But unlike Quentin’s situation, Oliver’s secret has a slightly different focus. Sure he would 1)keep distance to protect William and 2) he can’t tell Samantha that he’s the Green Arrow, but that’s not the problem here. Oliver is keeping his son a secret in order for him to be a part of his son’s life. It’s not a matter of ‘don’t tell the public’ but he’s also keeping it from everyone – even those closest. Thea figures it out as we saw – which I’ll go into in the next section – and that was a warm moment, but will everyone be as accepting. The irony is that if Oliver was treating the William secret as his other secrets, the gang would know and they’d also be sure to place William under protection from Darhk. The moment Oliver betrayed Malcolm – and threatened him -, he should have come up with a contingency plan since he knew Malcolm knew about William. This might very well be the first selfish secret Oliver has kept as ‘not telling’ anyone may have just doomed William and Samantha – who’s alive/dead status is currently unknown. 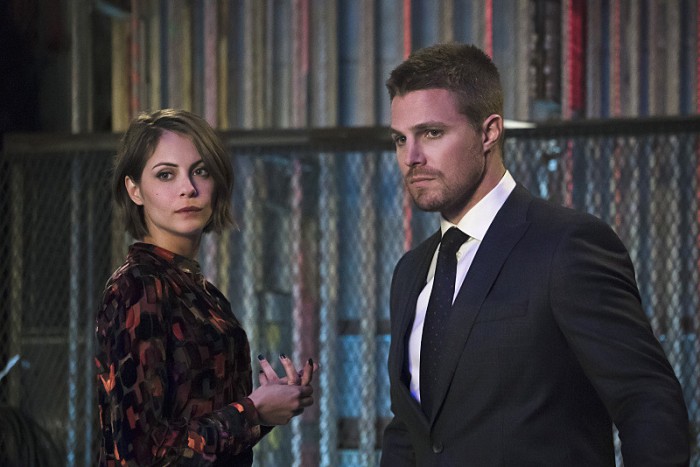 As I started mentioning earlier, Quentin and Oliver’s relationship grew this week in terms of their similar paths. Both have pressing lies in their lives, but it’s also important to note how much Quentin’s is tearing him up and yet Oliver looks – as Quentin said – pretty healthy. Quentin meant this to mean that Oliver is doing better now that he’s not keeping secrets, but could it be that he’s become okay with keeping this secret? Thankfully the episode progresses and as Thea finds out the truth, we hear Oliver’s thoughts on the matter. He is actually torn up about it and he does feel like he lied to Felicity – at least a lie of omission.

Though secrets aside, this episode did do wonders for bringing Oliver and Thea closer together. Besides Thea learning about Oliver’s son and giving him her blessing, we also see a lot of spectacular banter between them. We’ve always seen them as the ‘old brother looks after reckless younger sister’ side of their relationship; but this week we actually saw that mutual family bond between two people on equal footing. And while we’re on the subject of ‘verbal exchanges furthering a relationship’, this episode finally gave us a strong moment between Oliver and Curtis who devised a way for Felicity to walk again. Coincidentally, calling Curtis “Terrific” is a nice nod to his – hopefully – future role as the athletic tech hero Mr Terrific. Either way, Curtis is becoming more and more a trusted friend and ally to Team Arrow.

A Visual Spectacle – Praise To The Choreography & Special Effect Teams:

Last week’s episode was pretty lackluster when it came to battles. Not only did League vs League show downs look like sloppy hit-and-runs out in public, but the final climactic showdown between Oliver and Malcolm was so simple that many questioned whether it was an elaborate ‘show’ or not. Well this week more than made up for it as the special effects department and choreography/stunt coordinators went above and beyond the call of duty. Each fight scene was beautifully choreographed with both narrow and wide shots. Even the flashback had a well-executed fight scene as Oliver and Conklin faced off for the last time. Additionally, the escape scenes was a wonderful mix of fast action stunts and wonderfully large scale destruction effects. No matter which way you look at it, “Code of Silence” was a visual masterpiece that put the action back in this action series.

Next week, things are going to get really bad – but then REALLY awesome! On the bad side, Darhk will use his leverage and reveal that he’s holding Oliver’s son hostage. This will lead to some extremely tense moments and the revelation he’s been fearing. On the good side, this episode will also re-introduce Vixen to the Arrow-verse. Yes, that’s right “RE-introduce”.

If you haven’t seen the Arrow-verse animated series Vixen, you really should, but fear not! In preparation for next week, I am recapped/analyzed Season 1 of Vixen so that you can known Everything You Need To Know before next week’s episode of Arrow, aptly titled “Taken”. So go check that out in preparation for the next episode and I’ll see you again next week!