The Flash returned this week with new purpose, to get back Barry’s speed! But with such a big decision to make and so many risks, it’s going to take a lot of factors to help push Barry towards such a risky decision. Did everything go according to plan? HA! Nope. But is this outcome better or worse tha what we were expecting. Let’s find out on this week’s Closer Look at The Flash “Rapture”.

Recreating An Origin Story… For Someone Else:

Between last week’s preview and the Wells’s constant reminders this week, we knew the episode would end with Team Flash trying to recreate the particle accelerator experiment and giving Barry his powers back. Although as the episode ended, we of course learned that the episode title “Rupture” didn’t just refer to Cisco’s brother’s Earth-2 doppelganger; but also Barry exploding from the attempt to recreate his origin story. If anything, this was more of a recreation of Firestorm’s origin story as Ronnie was initially vaporized and then returned to physical form. Am I saying Barry is going to fuse with someone? Of course not, but vaporizing apparently doesn’t mean ‘death’ in The Flash, especially if you’re the title character. So in the long term, Wells’s attempt to recreate Barry’s origin story was a success; BUT it was actually more of a success for two very different speedsters: Jessie and Wally.

We’ve been getting hints all season about Jessie’s nickname being “Jessie Quick” and Wally loving speed; but in recent times we’ve been hearing even more about it. This is especially true with Wally who now feels a sense of purpose and responsibility after being saved by the Flash. And this episode was no different in foreshadowing both’s journey into becoming speedsters. From lines (like Joe telling Wally that maybe one day he’ll find a way to satisfy his need for speed and helping people) to story developments like all the focus on keeping Jessie and Wally safe…in STAR Labs… where a “contained particle accelerator explosion” is about to go off. Whether Jessie and Wally will wake up and discover/master their powers in time to help Barry stop Zoom is yet to be seen. It’s more likely a scenario to explore for Season 3; but either way this episode offered up tons of Season 3 potential with new heroes and villains coming out of the woodwork. 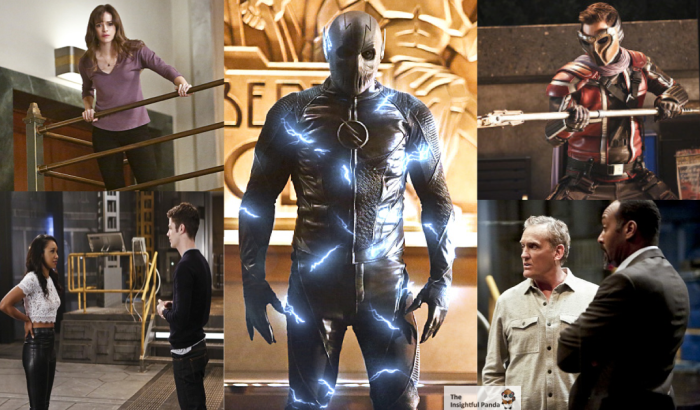 The Best & Worst Versions Of Yourself – Barry, Caitlin & Zoom:

Each episode always presents us with interesting compare and contrasts, and this week was no different when it came to the idea of being the “best or worst version of yourself”. We literally hear this from Barry who says he must become The Flash again as that is the best version of himself. Meanwhile, we hear Zoom commenting on how he thinks Caitlin and Killer Frost are more alike than they’d like to think. Is he right? Is there a darkness inside Caitlin waiting to be brought out or will she not succumb to those beliefs.

This all follows the Zoom narrative of can anyone become a monster. We saw this a few episodes ago when his and Barry’s origins were paralleled; and it’s happening now with Zoom and Caitlin. Is he onto something or only seeing what he wants? He’s technically not the first to think this as even Cisco was worried about Caitlin’s killer transformation when he first got back from Earth-2. She didn’t get powers last night from Particle Accelerator Explosion #2, but are powers in her future? Will she struggle between using them for good or become corrupted by them – like Cisco feared even he himself would.

Finally, it’s important to note that Zoom no longer seems to be struggling with this by episode end. He was a sociopath sure; but he previously tried to show Caitlin that he wasn’t a monster (at least not like his dad); but now he is fully embracing being that much of a monster in front of Caitlin. Note how this is the first time Caitlin caused Zoom have a flashback that didn’t result in him changing his mind and/or choosing the more gentle route.

In A Flash – Easter Eggs, Favorite Quotes & Other Notables:

Next week, Team Flash will try to get Barry back from God knows where. Is he in some weird psche Speed World or something else? Either way, there’s a Joe-Stand-In there and he doesn’t seem to ready to let Barry go. Though with only 3 episode left, I’m sure we’ll get some updates on Wally and Jessie’s condition as well as seeing Team Flash try to deal with a new Metahuman Zoom has set after them. So stay tuned for next week!

One thought on “A Closer Look: The Flash – “Rupture””