Arrow was back this week… AND SO WAS SUMMER SLAM 2016!!!!!!!! I’m sorry, that might have gone over your head. Let me explain. Earlier this year there was a heated back and forth between Stephen Amell and wrestler Cody Rhodes aka Stardust that ended with them fighting at Summer Slam. Now of course this was for show and the two are actually friends – or at least don’t want to slam a chair in the other’s face anymore.

So from the name of the new street drug – Stardust – to Cody himself appearing as the super-powered villain, this episode was a tremendous homage to that whole event. Though this episode wasn’t just a fan service but actually a very well-knit episode that showed the themes of “Brotherhood” and trust through every moment. Throw in a surprise familiar face and you have the best episode yet this season.

As I’ve said in the prior Closer Looks this season, the flashbacks lately have been spot on in terms of bringing the series full circle to Season 1 as well as setting up parallels and episodic themes – and this one was the biggest yet as the item for discussion was “trusting your brothers”. Sure the episode title told us right off the bat that this was going to be about “trust” – when is it not – but watching this episode really shows how brotherhood is a major part of that.

In the flashbacks, we see Oliver’s initiation into the Bratva, which not only explains his trust issues but also shaped the way he trains his new recruits. There the primary ideal is that you all form a brotherhood. When one fails, they all fail. When one falls, the others take up their revenge. When one succeeds, they all succeed. Team Arrow might function a lot kinder than the Bratva, but it’s still a brotherhood and like back then, Oliver has to learn to trust his team. Last episode was all about his team trusting him, but now it’s about proving that the trust is worth it.

This was no easy task and blame again felt on both parties; but in the end Oliver and his team come to a deeper understanding of each other and all of them are able to take down ‘Super Stardust’ and his army. In the field, each has the others back and for the first time they act like a cohesive unit. Though these feelings didn’t end here. Rory learned a dark truth at episode’s end and his trust in them is about to be called into question – but I’ll deal with that a little later. Additionally, on the mayoral front Oliver had to deal with the public’s trust in his campaign. And much like the flashback and present, Oliver shows his trust and support of his political team.

Though Oliver wasn’t the only one dealing with the idea of “brotherhood” this episode as Diggle found himself in similar shoes – but sadly, it was on the opposite end. We knew something wasn’t sitting right with Diggle ever since last season and it’s the fact that he still hasn’t forgiven himself for killing his brother Andy. If you saw last night’s episode of The Flash, Wells characters Barry as someone who isn’t good enough at forgiving himself. Well relax Barry because no one is worse at it than Diggle. As we saw last season, Andy was an awful human being who not only betrayed his brother’s trust but also threatened to hunt down Diggle’s family and – then – daughter. Unless Flashpoint changed more than just the age and gender of Diggle’s child, Diggle’s guilt is hard to grasp but is understandable. His story was always avenging his brother, which is why it was so important for Deadshot to be featured in this episode. It’s the man who Diggle thought killed his brother facing the man who actually killed his brother. Diggle feels that with him in prison, the killer is finally being brought to justice – and he’s going to need his wife and Oliver to slap some sense into him… or at least put an arrow in his leg. Oliver seems to be doing that last one at lot lately…. 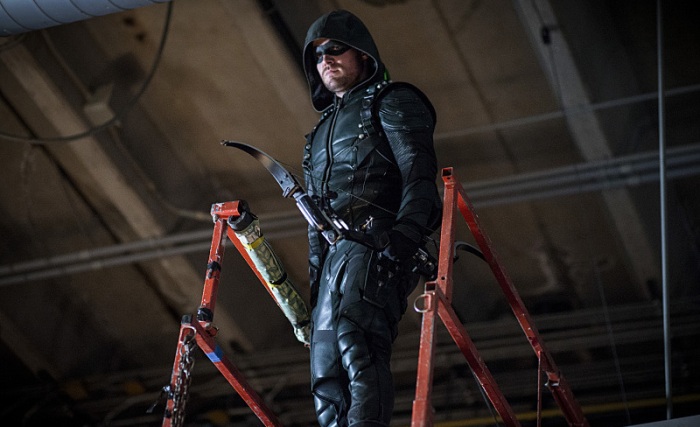 This week saw a crack form in the new Team Arrow as Feliicty admitted to Rory about her role in the destruction of his hometown. And next week might see another crack form as Lyla has come to Oliver to aid in breaking Diggle out of prison. Will Oliver’s new team side with him or will his stubbornness and desire to reclaim the original team cause further strife? We’ll have to find out next week, so stay tuned to The CW and here for another Closer Look.