With just two months until Captain America: The Winter Soldier hits theaters, we get our second look at Steve Roger’s latest mission. The hero out of time faces his toughest challenge yet by not only confronting a ghost from his past, but also defies the very country he stands for. So let’s get to the new trailer and see what we can learn; and remember “Trust No One”!

A ghost from Steve Roger’s past and a ghost story in the intelligence community, the Winter Soldier is the ultimate assassin. Speed, strength, and a bionic arm are just a few of his assets as we see him deftly catch Captain America’s shield almost instinctually before sending it back right back at him.

We finally get our first real look at the Winter Soldier himself and his – for a lack of a better term – badassery. From matching Captain America’s attacks to blowing up Nick Fury’s van, he is not someone to be messing with. Where this film will ultimately end as far as allegiances go, we will have to wait and find out. Although considering Captain America 3 was confirmed and is apparently in pre-production, it’s safe to assume that Winter Soldier might be a major playing moving forward as he is a favorite from the comics.

Can’t we all just play nice?

As we saw in The Avengers, S.H.I.E.L.D. answers to an organization known as The World Security Council, and at the end of The Avengers they are not happy. Throughout the film – as well as the deleted scenes – we see how Fury constantly defies the council and then disgraces them further by saving Manhattan from their Nuke-attempt. Despite the good he’s done, the council is more concerned with obedience to them.

In the new trailer for Captain America: The Winter Soldier, we see Steve Rogers meeting with the head of the council at one point and then later fighting off an elevator full of attackers. Has The Winter Soldier’s men infiltrated the council and S.H.I.E.L.D. itself, or is there something else entirely going on?

As you can see in the scene – if you slow it down and pay a lot of attention to detail – the men are all wearing the S.H.I.E.L.D logo on their shirts so they are definitely members in some capacity. Also, you can see some sort of handcuff on Captain America’s right hand – that he later breaks off with his shield. Pair that with the apparent taser sticks, and it seems as though these attackers wanted to take Capt into custody.

A massive air battle between numerous Helicarriers over DC, but who’s friend and who’s foe?

From the looks of it, Captain America is now operating on his own with only the aid of Black Widow, Falcon, and Nick Fury. Is the council and the Winter Soldier connected? We’ll have to wait to find out. Though considering a S.H.I.E.L.D jet firing on Captain America and the elevator full of men, it’s safe to say that the Captain will have to deal with both obstacles. 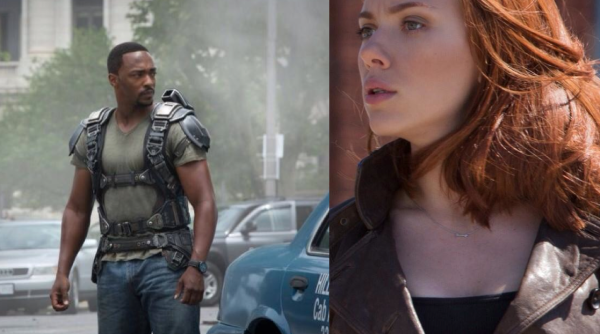 Falcon and Black Widow join Captain America in his battles this time around, but I wonder where Hawkeye is though. Maybe Black Widow knows *cough arrow necklace*

With so many obstacles, Captain America will need all the help he can get. Black Widow will be joining him, but whether Hawkeye will make an appearance remains to be seen. Although, he might certainly be mentioned considering the suspected romance between the two we’ve been expecting since Avengers.

Joining the team will newcomer Samuel Wilson aka The Falcon. Sporting some killer combat skills as well as an expandable flight pack that even Tony Stark would be proud of, the Falcon seems to be Captain America’s right hand man this time around as they wage war on S.H.I.E.L.D and the World Security Council.

Colbie Smulders will be rejoining the cast as Maria Hill and whereas we don’t get to see much of her in actions, that doesn’t mean she won’t be a big part. This is a S.H.I.E.L.D movie after all, and Maria Hill is basically second in command from Nick Fury. From the deleted scenes in Avengers we know that she is definitely political and cunning, but on the inside holds great respect for Nick Fury. If there’s corruption with S.H.I.E.L.D, she might not fight it directly like Captain America and the others, but you can be sure she’ll flush it out from the inside. Speaking of S.H.I.E.L.D leaders, where’s Nick Fury in all this?

The Death of Nick Fury?:

Originally we saw the Winter Soldier attack Nick Fury’s car, but after the release of the new Super Bowl trailer we get a larger picture of what might be going on. Warning: This is going to be some heavy speculation, so let’s break this down one scene at a time and I’ll explain how I think they play out.

We know that at some point in the movie, probably early on there is a car chase where the Winter Soldier attacks a caravan of S.H.I.E.L.D. cars. In one scene he even punches his way through the windshield and proceeds to effortlessly rip the wheel out of a car. The drivers of this vehicle seem to be Falcon and Black Widow (green t-shirt and red hair). Though the intended target doesn’t seem to be them at all, but instead Nick Fury himself.

From the copious amounts of bullet holes in the car, it’s safe to assume Nick Fury didn’t only sustain injury from the impending explosion.

Next there is the scene where Nick Fury’s car is blown up. As you can see from the screenshot, it is already riddled with bullet holes suggesting that it was already in a pretty fierce firefight – most likely the one we just saw the Winter Soldier in. After the explosion, Nick Fury is absolutely alive but is in pretty bad shape.

Next we have the operation scene where we can clearly see Black Widow, Captain America, and possibly Maria Hill watching over Nick Fury go into surgery. Unlike the prior trailer, this one shows Black Widow, Captain America, and Maria Hill (all in the same clothes) in the morgue looking over a dead body underneath a sheet. Considering they’re all in the same clothes – and only one man could bring them all together – its entirely possible that Nick Fury is supposed to be under that sheet. With the World Security Council out for him it makes sense that they’d want him dead too, but is he really?

We do get to see a vision of Nick Fury – pretty beaten up – commenting to Captain America that it looks like he’s in control now. This would mean that Nick Fury faked his death and escaped the lime light a little – thus why he commented on things changing to make the Captain in charge “now”. This would also make sense since I’m fairly certain Captain America vs S.H.I.E.L.D. will happen later in the film, so Nick Fury coming back in once it’s just their small band of rebels makes sense – dialogue and timing wise.

Of course it could totally be someone else under that sheet. Or maybe Nick survives the crash but has to go for surgery for something else later in the film. Or maybe Captain America and Black Widow only have 1 pair of civilian clothes. Either way, I think it’s safe to say that this is the most reasonable prediction – and that it’s fun to predict things regardless.

One way or another, Captain America 2: The Winter Soldier absolutely stole the show for Super Bowl XLVIII in terms of offense. This is sure to be one of the top movies of the summer, leading the competition in both action and political intrigue.