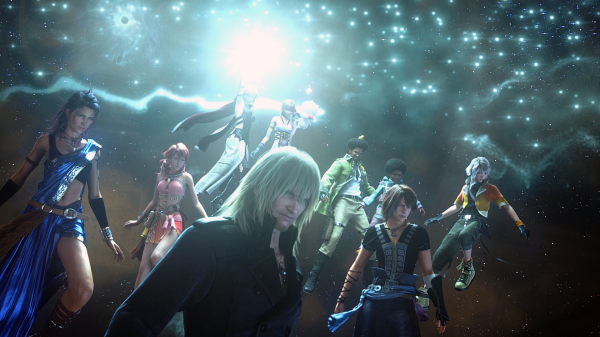 After four long years – and three game titles – the story of Final Fantasy 13 comes to its climactic end, but who would have guessed the end would be so . . . end-y? With its countdown to destruction clock, many game elements might seem rushed at first; but once you get the hang of the new game mechanics you’ll find this to be one of the most interesting games you’ve played in a while – and a fitting end to this unorthodox, yet thrilling series.

Lightning Returns has an amazing story that details not only what life has been like for the past 500 years, but also how people deal with the approaching end and the secret agendas of mysterious cults and characters. Since the end of Final Fantasy XIII-2, no one has been able to grow old and die. New children haven’t been born into the world either. It’s almost as though time is standing still as everyone repeats the same tasks over and over again. Everyone you meet has lifetimes of regrets and it’s your job as the savior to try to restore their faith and save their soul.

This is a very deep and moving story to be sure, but the one draw back is how its executed. There are five main quests that have their own story lines, but aside from these everything else falls on you to be the ‘good samaritan’. Despite XIII-2’s time-line divided story, it was still all one driving story. Once the main stories here are finished, everything else seems like odd jobs until the final day. Personally, I wish there was more of a story throughout it. Yes, you’re the savior and you’re supposed to save everyone. Yes, you get more and more little hints about Lumina. Though in the end it still seems more like an open ended story than one linear tale.

One little piece of advice you’ve probably heard by now is that your first play-through of this game should be on Easy Mode. Now as someone who’s played every title in this series and completed Final Fantasy XIII-2 to 100% completion, I figured everyone who was saying this weren’t familiar with the series. Although after I found out that Square-Enix recommended Easy Mode also, I decided to listen – and I’m glad I did.

The time system  is difficult to get used to. So while you’re busy figuring it out, it’s nice to know your health will slowly recover between battles. It’s also important to note that EVERY trophy can be achieved in Easy Mode. This game was designed to encourage multiple play-through’s, so play on Easy first and then you can start a New Game+ on Normal Mode if you like or Hard Mode – if you’re crazy enough – once you’ve unlocked it by completing the main story.

Again, I have to admit when I first started this game I felt the pressure of the countdown clock. If this was any other game, there was no way I would have gotten it. I like explore games to their fullest extent and make myself stronger before I drive ahead, but there’s not time for that here. Final Fantasy games have known for being expansive but never past a single play through so this was just strange all around. 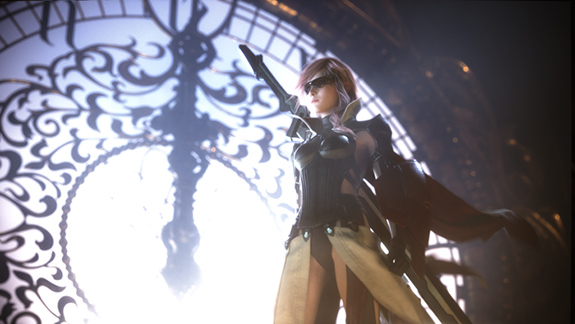 That being said, once I got used to the clock system, learning how Chronostasis can freeze time bit by bit, and multitasking side-quests, I began to enjoy the exponentially more. It honestly feels like I’m racing against time to save people – in a good way. It pulls you in and adds depth in ways I didn’t think a video game could have. The sense of urgency is easily one of the most unique features of this game.

Overall, I’ve come to enjoy the clock system and what it offers to the game; however, PLEASE Square-Enix, never use this system again. As I said, if it wasn’t for Lightning’s Story and all the characters we’ve fallen in love with over the years, I wouldn’t have given this much of a chance. So from now on, let’s just stick with the huge explorable world that we can familiarize ourselves with  on our own schedule.

Unlike past Final Fantasy games – or games in general – where you level up via battles, in Lightning Returns you get stat boosts via completing quests. Completing main quests, side quests, and Canvas of Prayers quests all offer you certain stat boost while customization through schemata set-up offers you additional powers and abilities. This idea certainly took some getting used to, but once you get past the sheer overwhelming customization options, you realize just how beneficial this new system is.

Imagine having an outfit that makes you a relentless powerhouse with Strength stats off the charts, or maybe one that encompasses all elemental abilities. Now what if each outfit and attack came with its own preset auto-abilities: a Thundaga that increased your magic stat, a Heavy Slash that left your opponent prone to follow up onslaughts, guarding that automatically restored health. This is the true potential of this customization/leveling up system.

Not only can you level-up weapons and armor, but you can also create your own spells that have added abilities. There’s certainly a lot of work involved with this system, but the pay out far exceed the cost of re-familiarizing yourself. The only downside of this is that you can only swap between three schemata at a time. You can have more pre-set schemata set up, but only your main three are available for battle.

Whether you defeat the final boss or run out of time, there is a built in New Game+ option that lets you carry over your progress from prior. All items, weapons, garbs, Gill, etc will be carried over except for the Ultima Weapons from the final day dungeon and other quest items. It’s also important to note that quest items/ progress WILL NOT be carried over. So everything from side quests and Canvas of Prayers must be completed again.

Now if you achieve a New Game + after defeating the final boss, then you’ll not only get access to Hard Mode, but also get additional perks such as the ability to upgrade equipment, improved weapons at forges and the ability to uncap your maximum damage potential and health.

Overall, Lightning Returns is a great game that has many redeeming qualities, but the fact still remains that if it wasn’t the final note in the Final Fantasy XIII story, I would have never given it a shot. It’s groundbreaking, unique, and introduces a lot of open-world concept, but it does so with an overall feeling of rushing. If you asked me about little side missions in XIII-2, I can remember them all perfectly. If you asked me about a side mission I completed the other day in Lighting Returns, I wouldn’t remember most.

With the game feeling so rushed and focused on saving time, I find myself rushing through conversations – even though they in no way deplete time. This is a wonderful game that Square-Enix put together. I just wish I had the time to enjoy it fully. No, “oh, focus on that more next play though”. I just want one, complete, meaningful play through. After all, isn’t that what Final Fantasy has always been about? One larger than life adventure that draws us in and stays with us for years to come. Any additional play throughs should be our trips down memory lane, rather than forced upon us.