Remember that time tens of thousands of people played the exact same game of Pokemon all at once? Well it’s been going on for the past few weeks and it’s been exceeding all expectations – both good and bad. One Twitch commenter said it best:

Basically, Twitch Plays Pokemon is an online version of the original Pokemon Red for Gameboy that is hooked up to a chat room. Users then type in the button they’d like to pressed – a, b, up, down, left, right, start, select – and then see what their choice has gotten them. Since no player knows what any of the other 50,000+ people are entering, its a complete shot in the dark that has led to many mistakes and wasted time. Add in the lag time and it’s easy to see why the game went on for 17 days straight and are just now defeated the Elite Four – final bosses. So what’s exactly been going on?

That Time We Released Our Starter:

A trainer’s starter Pokemon is his most trusted companion. You’ve been together from the very start so it’s only natural you’ll want your most senior team member with you always. That is unless, you release him into the wild.

Once a Pokemon has been placed in your storage box in the game, you have the option of either withdrawing it or releasing it – never to see it again. Thanks to some poorly chosen button selections at some even more poorly chosen moments, Twitch’s in game character released his starter Pokemon – a Charmeleon by the name of “ABBBBBBK (” – but it didn’t end there.

Be free ABBBBBBK ( , save yourself!

Anytime the player goes into his PC to withdraw/deposit a Pokemon, theres no telling what can happen. On one occasion, 12 Pokemon were released by accident while trying to add the legendary Zapdos to the team – more on this later. Even items aren’t safe from being cast aside. Moonstones, Nuggets, and various other items have all been mistakenly cast aside.

That Time We Formed A Democracy:

From its inception, Twitch Plays Pokemon was all about the chaos of people entering a command and seeing what happened in the sea of other command comments. Amazingly, the majority of the game has been completed – albeit slowly – by this haphazard method of play, but sooner or later the players would need a hand. The programmer himself never wanted to interfere, but at certain moments a popular vote would be needed. As that one monkey  comment alluded to earlier, some players want to push the story forward while others just want to cause chaos.

To make sure the game could move on – yet still be in players’ control – two modes of play were introduced: ‘Anarchy’ what the game had been until now; and ‘Democracy’ where each next-move is voted upon. The game mode the game is in is constantly being voted on as well. If the majority of commenters are calling for a change to ‘Democracy’, Democracy mode will begin – and vice versa.

Which side will you choose?

Each clearly has its perks: Anarchy  is funny and fast; while Democracy is safer and leaves less room for error. On the other hand, Democracy is very slow moving, while Anarchy leaves far too much room for horrible unintended mistakes – We’ll Miss You ABBBBBB (. Whichever side you prefer, you’re not alone. The Anarchy vs Democracy mode debate has gotten quite intense with each side spamming the chat box to get their way. Lately you’ll see more of these words in the chat box than an actual screen command.

That Time We Started A Religion:

All Pokemon games revolve around the story of a boy – or girl – traveling from city to city on a quest to become a Pokemon Master, but if someone were to watch this game from start to finish they would notice something quite different: wasking around in circles, releasing Pokemon and items, and basically making bad decisions at every turn. Our hero seems pretty inept, so how could he possibly succeed? The answer: with a little help from his lord and savior Helix.

One of the most common occurrences in the game – besides walking in circles – was opening the start menu and trying to use the Helix Fossil – an item that can never be dropped or used. Despite everything else you love dearly being tossed aside by accident, Helix remained there for you. So what if all those times you tried to use it, you were trying to gain inspiration? This theory ran wild and soon “Helix Be Praised” was a new tagline, but the story didn’t end there. Due to his staying power and high level, the team’s Pidgeot – originally a Pidgey known as “aaabaaajss” – became known as Bird Jesus. As the true chosen one of the great Helix Fossil, Pidgeot was the strongest member of your team and lead you to many victories. Sadly, with every religion you have a dark side – in this case it was the Cult of the Dome.

The Dome  Fossil – the alternative to the Helix – amassed a lot of supporters who believed it to be the superior Fossil to choose. This all seemed like fun and games until Eevee was acquired and evolved into Flareon. Soon after this new member was added, your original starter Pokemon was accidentally released into the wild. Many have not forgotten this tragedy and Flareon was labeled a heretic and false prophet for the rest of the game, but more sacrifices would soon be made.

Soon after the capture of the Legendary Bird Pokemon Zapdos, 12 Pokemon were accidentally released while trying to add Zapdos to your team – an event that will forever be known as Bloody Sunday. Despite some labeling him as another false prophet, Zapdos was soon embraced as the new stronger Bird Jesus. Whatever side you were on, the majority embraced him as a true prophet because the chosen one would walk again. On the Eleventh Day, The great Helix Fossil was finally used properly and Omanyte was revived. Twitch followers rejoiced while some others feared that this could eventually lead to his unintended release as well.

To everyone’s joy, Omanyte evolved into Omastar and was pivotal in defeating the Elite Four. How such a small comment became a full fledged Poke-religion is mind blowing. Just don’t think that was the only surprising thing about this game, because the greatest moment is still to come.

That Time We Amazed Ourselves:

When almost a hundred thousand people play the same game, there’s bound to be some amazing moments of teamwork. Making it out of the dark cave was certainly one. Also the mere fact that we didn’t throw away or waste the Master Ball, but instead used it on the Legendary Zapdos is simply incredible. Although the most amazing moment was that … we won.

We did it. We all came together and completed the game. Sure it took a little longer than expected, but in the end we got there. And we certainly had some close calls. Remember when we magically switched to Zapdos and he demolished Lorelei’s team. How about when the great Omastar took down all of Bruno’s Rock/Fighting Pokemon? As high level Pokemon with type advantage, they were smart choices. But what about that time a low level bug flawlessly defeated a dragon.

A low level Venomoth defeating the greatest the Elite Four had to offer all on its own.

One of the weaker members of our team was an intrepid little Venomoth named AATTVVV – which affectionately made him known as All-Terrain Venomoth. During a battle with the Elite Four, he was all the remained between you and Dragonite – the ace monster Lance – the Dragon Pokemon Trainer and final member of the Elite Four. So how in the world did this happen? Luck. Beautiful amazing luck. Between Dragonite missing/ using mainly stat based moves and Venomoth poisoning it, Dragonite fell and the battle was won.

So where to next? Pokemon Crystal will be the next adventure and it’s just begun. A ton of copy cat streams have already popped up for various other games, though none have had the same cult popularity as Pokemon – which lent itself well to both being played slow as well as being the most recognizable.

After over 300 hours, the new adventure begins

So before we get too embedded in Pokemon Crystal with our starter Totodile – who is my favorite –  take a look at some of the amazing fan art and memes that have been created in response to this social experiment in gaming. And as always, Helix Fossil Be Praised! 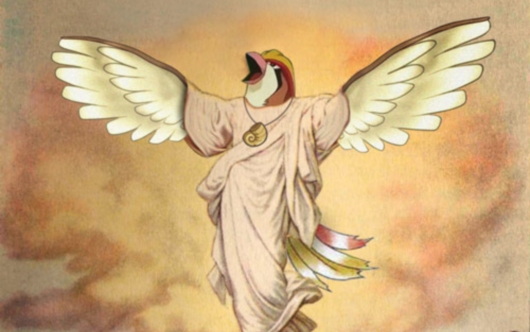 All hail Bird Jesus, the chosen one of our lord Helix fossil

Omanyte has deemed you worthy

May the odds be ever in our favor. Because seriously . . . we need em 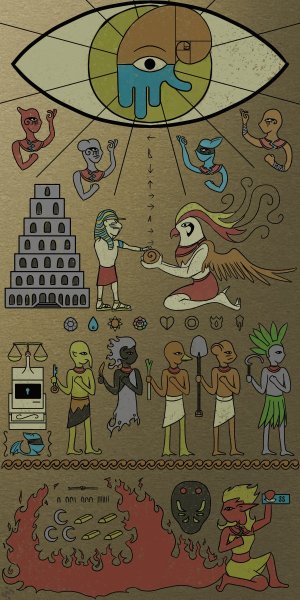 Truly these tales have been foretold for centuries, as can be seen in these ancient hieroglyphics

After many hours spent lost in Team Rocket’s HQ, this helpful Raticate mistakenly used ‘dig’ . . . several steps away from claiming the important Silph Scope. Time to start all over again.

The Chosen Six, who stood against the Elite Four and won 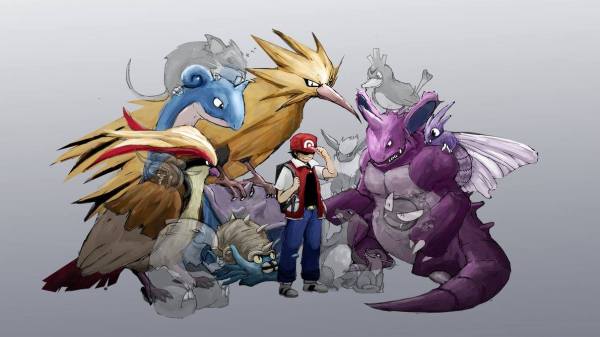 In memory of those who we’ve met and lost along the way. Couldn’t have done it without you

One thought on “Twitch Plays Pokemon: The Good, The Bad, And The Elite Four”