With Captain America 2 destroying the box office and taking the genre of superhero films to new levels, you probably thought Marvel was done for the summer – not even close! Earlier this year Marvel released a brief trailer introducing Guardians Of The Galaxy, their newest addition to the Marvel Cinematic Universe. Now with just about two months left till its August 1st release date, we get always highly anticipated second trailer.

So what’s so special about a second trailers? Well unlike the preliminary trailer whose sole purpose is to announce the movie and give some moments of ‘hype’, the second trailer is where the film really gets to show off story and graphics. By the time secondary trailers are released, the filmmakers have had ample time to add in all the necessary effects – and Guardians Of The Galaxy is no different.

When we first met Peter Quill (played by Chris Pratt), he seemed like a wannabe thief that was in way over his head. I mean come on! He’s trying to start his own nickname – Star Lord. Sure he’s got the sarcasm of Tony Stark and gives off a huge Indiana Jones vibe, but compared to an assassin, destroyer, killer tree and rocket-launcher-wielding raccoon, he seemed a little out matched. Though thanks to this new trailer, we get to see exactly why he is the Legendary Outlaw he claims to be.

With augmented human abilities and gadgets galore, Peter Quill earns his title of Star Lord again and again in this new trailer. From rocketing away from trouble to showing off his Element Gun, he has the skills and the gear to go from small time thief to legendary outlaw. As for his helmet, that’s a marvel in its own right. From enhancing his breathing capabilities to analyzing real time battle date, it’s a must have for saving the galaxy. Oh, and did I mention it has a built in translation device – take that Rosetta Stone!

As for who Quill is behind the mask, we’ll have to wait for the movie to find that out. He’s usually a half-human/half-alien, but in this film it looks like he’ll be raised from childhood by the alien Yondu played by Michael Rooker – who you may know as Merle Dixon from The Walking Dead. Aside from personality, powers and home life, he also has a sentient ship – which you kind of need to save the galaxy. All in all, he’s certainly shaping up to be the next Han Solo.

Aside from some more shots of Gamora and Drax, we don’t really get to learn much about them – or even hear them speak – ; but there are two other team members we get to see quite a bit of. If you could walk in your backyard in turn any two things into super powered would-be-heroes, what would you pick? If you said a raccoon and a tree, then you’ll love Rocket and Groot – and if you didn’t, you’ll still love them.

Yes, that is Rocket Raccoon… ‘fixing himself’.

What do you get when you cross a raccoon with Wolverine’s rage, Ironman’s snark, and some heavy weaponry? The answer is Rocket a Raccoon voiced by Bradley Cooper – whom we get to hear for the first time. This trigger happy raccoon is definitely a thug you want on your side. With tons of battle experience and the ability to fit nicely in most overhead containers, Rocket is your compact muscle on the go. But what if you need to reach those hard to get places – like the top shelf?

Introducing Groot, played by Vin Diesel. More than just an overgrown houseplant, Groot serves as Rocket’s added muscle; and as we see in the trailer, that muscle can only go up. Like all trees, Groot can grow. Despite only seeing a few saplings and twigs sprout in the trailer, I’m sure Groot will bulk up even more by time the film’s over.

Aww, he’s giving someone a flower. He’s not so bad

It’s funny. Despite being the two most outlandish members of the team, Rocket and Groot are also the cutest – and coolest in my opinion. Whether it’s Rocket’s furry little face or Groot staring inquisitively at a cassette tape – yes, they still exist – these guys are adorable. Just don’t tell them that. They might bite your face off. Well at least a Rocket might, Groot actually seems very kind hearted – and he introduces himself so politely.

Up until now, all of the movies in the Marvel Cinematic Universe have taken place within a limited scope – Earth, Asgard, icy frost planet, etc. Guardians of the Galaxy breaks the mold and takes us to … well … and entire galaxy with numerous worlds. The MCU is about to get a lot bigger; and this trailer fully showcases not only how large the universe is, but also connects it to the already existing universe.

In the new trailer we find countless worlds, races, and organizations that will all come into play sooner or later. From epic space battles to what appears to be a living planet, this film will take us to places we never even dreamed of when Ironman first debuted in 2008. Though despite all of these brand new frontiers, there will always be some connections to bring us back home.

After his brief cameo at the end of Thor 2: The Dark World, The Collector (played by Benicio Del Toro) will return in this film for a much larger role. Also rumored to appear is the Titan Thanos whom you might remember from the end of The Avengers. Even though his casting has been kept very secret, with Gamora being his ‘suspected’ adopted daughter and Nebula (played by Karen Gillan) being his granddaughter, it would make sense for him to appear and start setting the stage for Avengers 3 – which Guardians of the Galaxy is actually the lead in for.

And so the eccentric Collector returns

Beyond movie tie ins, there is also some connections to Marvel’s Agents of S.H.I.E.L.D. There is apparently a character in this film named Dr. Fitz, who could have some relation to Leo Fitz from the ABC hit; bit the connection don’t end there. Without spoiling too much – in case you haven’t been following the show – we saw a blue alien that appears to be a Kree, an advanced alien race that is similar yet far technologically superior to ours. Will a Kree be one of the many alien cameos in this film? More than that, the main villain is actually Kree.

To Kree Or Not To Kree … The Villain:

Meet Ronan, The Accuser – and no he’s not War Smurf. If you get a strange Cultish vibe from him, you’re not alone. Ronan is member of the Kree Accuser Corps and thus has access to a wide range of gadgets, the most frightening of which is his hammer known as the Universal Weapon. Fun Fact: If something is called the Universal Weapon, it’s pretty overpowered. Over the years this weapon has had many powers including – but not limited to – energy absorption, gravity control, force field, controlling time, teleportation, transmutation, and anything else associated with bending cosmic energy to your will.

Though the most frightening thing about Ronan isn’t his tech, but rather his personality. This film promises a Ronan who is the “twisted, religious bent” psychopath that serves the Thanos. He believes that strength is virtue, but weakness is a sin that must be purged. This certainly explain why he would serve Thanos – as well as why he might be trying to kill twelve billion people (if he saw them as weak).

“So here we are: A thief, two thugs, an assassin, and a maniac”

In the end, Guardians of the Galaxy might be a gamble for Marvel, but I’m sure it’ll be one that will pay off. They started off by promoting it as a joke and asking the question everyone was thinking – ‘who are these a-holes’ –; but now they are adding some seriousness to it while still keeping the humor. The most important thing to remember is that this film will NOT set up for Avengers 2: Age of Ultron, but rather Avengers 3. So despite its role as the last base installment in Phase 2 –  not counting Avengers team up – think of this film as a new begging.

I’m not sure which of these is the Element Gun, but I’m excited. 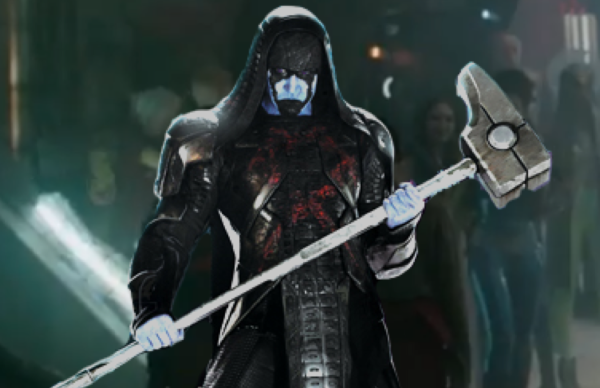 A clearer look at Ronan

“Oh what the hell, I don’t got that long of a lifespan anyway” – Rocket

Can someone water Groot?