After last season’s climactic cliffhanger moment, The Walking Dead finally returned to AMC last night; and with it we saw the most brutal and over the top episode of series – if not television itself. From slitting throats and cannibalism to threatening to snap a baby’s neck, it’s no wonder Steven Yeun (Glenn) asked “How is this legal” when he first saw some of these early scenes. Though beyond the blood and racy material, this episode not only had brilliant writing; but also introduced us to some new mechanics that will be explored this season.

Playing With Timing – Then, Before, Now:

No matter how irreconcilably evil the Termites were, The Walking Dead did an amazing job at trying to explain them. Joe and his band or marauders from last season just seemed to be bad people; but the inhabitants of Terminus weren’t always. They were kind before they met a group similar to Joe’s; and then they snapped. By showing this backstory, it was possible to begin to draw parallels between our heroes and the Termites – which I’ll get to later.

The other important factor of this time jumping was to show what Carol and Tyresse were up to and how they were responsible for saving everyone else. Upon closer inspection, we also see how pivotal Bob was in all this. If he hadn’t tried to reason with Gareth, all of them might have been dead before Carol blew up the gas tank – or at the very least we’d have lost Glenn.

These time jumps will be used throughout this season to add some much needed backstory to certain characters and explain their present actions/situation. Though to be fair, no other episode will play with time as much as this one. With Morgan returning and a bunch of new characters like Father Gabriel being introduced, it’s important to get these mini time hops to see what’s happened in the near and distant past before we can fully understand the present.

When We first meet back up with Tyresse, we find him still incredibly shaken by the events at ‘The Grove’. Even though he wasn’t the one to pull the trigger, he is still hesitant to put anything down like they did to Lizzie – even walkers. This restraint changes eventually when one of the Termites threatens to snap Judith’s neck. They say a parent can gain incredible strength when their child is threatened. Well Tyresse might not be Judith’s father; but no one else is going to die under his watch. In perfect – back to baddass Tyresse – fashion, he summons enough strength to not only take down multiple walkers single handedly; but also burst the door down and save Judith.

Remember this: “You’re my brother” – Rick to Daryl

Meanwhile at Terminus, Rick is still high utilizing his new found “angst free brutality”. Though beyond that, we see him and Daryl maintaining their brotherly bond. Last episode Rick told Daryl that he was his brother, which meant a lot for Daryl since losing Merle and basically being alone now. Sure Rick and Daryl will always save each other; but this time around the nods of appreciation and backing up had so much more depth and meaning.

We Could Have Been The Same:

As we saw/learned from the flashbacks, the people of Terminus used to be kind hearted and good; but then they became animalistic after they let the wrong people in. If only they had Rick’s 3 questions: “How many walkers have you killed? How many people have you killed? Why?” It is through these 3 questions that our heroes were able to weed through the weak and the sociopathic.

If Rick and them didn’t use this rule, then they could have easily suffered the same fate as the Termites. We even saw the founding of this back in Season 2 when Rick and Hershel met those suspicious men in the bar. If they had let them join them at the farm, those men could have raped and tormented them. Though the most drastic ‘almost happened’ was during last season’s finale when Joe and his gang threatened to rape and murder Carl, Michonne, and Daryl. 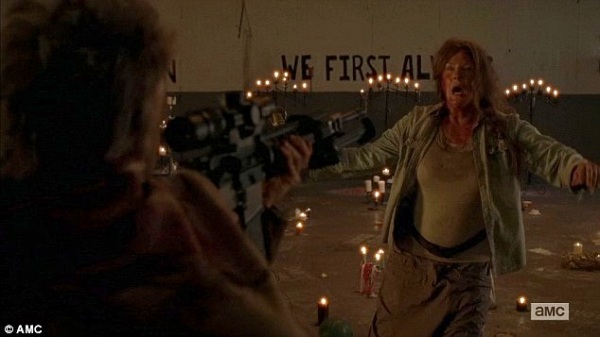 This momentum of evil that started with last season’s finale was the perfect way to lead into this premier. Just as Joe’s gangs threats of rape spurred Rick to embrace his inner rage, we see that the group of rapers turned Terminus into something evil. If Rick hadn’t found the strength to fight back that moment or had support, they could have become a lot like Terminus – if they lived. There is still a spossibility that they can keep on changing due to these mishaps; but it is the good of people like Glenn and his daughter Judith that’ll keep Rick balanced.

The scene between Carol and Mary was also a powerful contrast of ‘who they became’. If you remember, Carol started as weak and was constantly abused; but she became strong – much like Mary. Though the difference between these two is that Carol hasn’t lost her emotions or gone crazy. She knows what has to be done and makes the hard choice, but she will remain human thanks to her friends and her own internal strength that she’s found. It pains her to take a life when she has to, unlike Mary who remains detached like slaughtering livestock.

Chris Hardwick made an excellent point on last night’s Talking Dead when he compared it to Batman Begins when Batman tells Ra’s al Ghul that he wont kill him; but also doesn’t have to save him. Carol had to leave through the zombie door anyway. She wouldn’t kill Mary; but neither would she save her from the walkers that would inadvertently wander in.

Needless to say our heroes brief time with the Termites will have lasting effects on them. Forget the farm burning. Forget the Governor. This was quite possibly the evilest, most dire situation our heroes have ever found themselves in, and the cycle of scaring will continue. Just as that band of rapers/abusers/murderers turned the Termites into soulless cannibals, Rick and the gang’s near brush with death will turn them as well – though not into cannibals.

The theme of this season is “Hunt or Be Hunted”, which mirrors Gareth’s ‘you’re either the butcher or the cattle’ comment. No one they love died and in the end all were reunited happily, so they wont be as damaged as the Termites. That being said, any hope of finding sanctuary has been killed and anyone they come across isn’t going to be met with welcome arms. Rick is becoming what Shane never though Rick could be – strong enough. More and more, he’s embracing his brutality and making the hard calls. Though now that the group has time to sit, there might be a little unrest within the group as well.

They’re no longer trapped in a boxcar and with time to sit, Rick might recognize Tara. He was on the front line and saw Tara with the Governor. Will he be accepting of who she is and who she has become; or will he distrust her. Further more, if he finds out – and makes a scene – Maggie could learn too, which would add to the drama. Glenn told Maggie he met her on the road, which could cause some distress between our favorite couple. We’re all shaken by the experiences of this premier, so it’ll be interesting to see who our heroes become.

Though whatever our heroes become, it seems as though there might be someone to remind them – especially Rick – who they were. As we saw in the post credits scene, Morgan is alive, well and probably joined the Assassin Brotherhood. Okay, I’m kidding about that last part; but there is a lot more we can gather from this scene than just ‘Morgan’s alive!’. 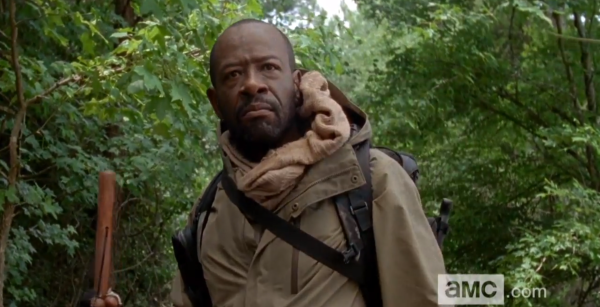 The last time we saw Morgan he was a little . . . out there. Though now we see Morgan looking much more put together and most shocking of all, looking for people. When we last saw Morgan, he wanted to be left alone all to himself; but now he is actively looking for people. If he was following those Terminus signs, then he was looking for civilization. Terminus has of course been revealed as ‘no sanctuary’ and now fallen, so where will Morgan go now? What are those X-shaped tree markers he’s following now? Only time will tell; but hopefully it’s somewhere good.

Where will this Season of Walking Dead head next? Well considering Terminus – the place we assumed much of Season 5 would be spent – was obliterated within one episode, the door is wide open. There’s sure to be tons of new characters as well as the discovery of what happened to Beth coming very soon. The trip to DC looks to still be a primary objective; but is it a fools errand? Does Eugene actually have a cure or is this one big deception? Is everyone at Terminus actually dead? Looks like we’ll find out the answers to all these questions soon enough.