Fall is upon us; but let’s escape the coming cold and get away to the beautiful Corto Maltese. It has sun, rich culture, wanted murders and that sister you’ve been missing for six months. So let’s take a closer look at this week’s episode and see what our heroes are up to.

Catching Up With Thea:

As opposed to the usual “what I did on/off the island” Oliver Queen flashbacks, this episode dealt with Thea’s 6 months of training under her father Malcolm Merlyn. During these flashbacks we see an interesting relationship develop between the two as Malcolm seems almost nurturing; but then we remember just how far gone he is. What his game exactly is, we don’t know yet. Either he’s a key role in Sarah’s murder or he’s just really paranoid and this could be his path towards redemption. 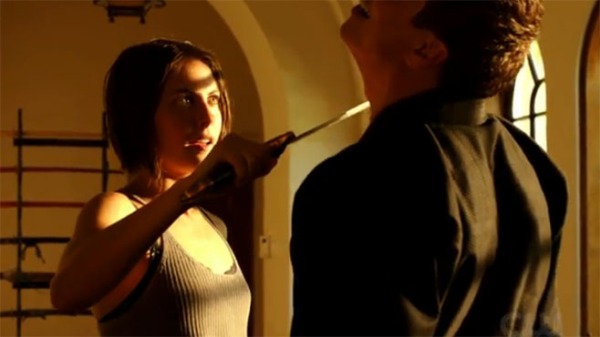 Though the real tack away from this episode is seeing what effects those months had on Thea. Will there be more flashbacks? Possibly, but regardless we know that her time here will have definite repercussions on her return to Starling City – as was hinted at by her not feeling the hot coffee spilled on her. Much like Laurel, I see Thea following her brother’s footsteps and becoming a vigilante. She originally went on this trip to learn how to not ‘hurt’ anymore; but there will be more to her training that just that.

Some speculate that she’ll replace Roy – due to her nickname as Speedy – but I think she will actually become Artemis or Jade, since the backstory of being trained to not feel pain anymore is pretty spot on. Whatever comes of Thea this season, we can all agree that she’s moved far beyond the ‘over emotional tween’ that we’ve seen for the past two seasons. Now the only question is where she will live since the Queen’s are bankrupt and Roy is still spending his nights with Oliver.

Laurel seems to be getting more and more driven to follow in her sister’s footsteps. As if seeing all the signs of comparison weren’t enough, Detective Lance constantly reminds us of this every time he tells Laurel that she isn’t her sister. Though despite what her father says, Laurel has made up her mind to follow in the vigilante footsteps. She now sees firsthand that a vigilante can do thing and act upon information that cops simply can’t – ie: alcoholics anonymous meetings –and she needs to quench the fire burning inside her.

Her path isn’t all that different from Roy’s. Both have this inner anger and rage that needs to be trained and focused. The difference here is that Oliver refuses to train her. He knows that Sarah wouldn’t forgive him; but if there is one thing Oliver should know by now, it’s that there’s no changing Laurel’s mind once it’s set to something. Since Oliver won’t train her, she returns to the gym for lessons – which to be fair doesn’t seem as encompassing as Oliver’s lessons would be. Or MAYBE the gym trainer is more than he appears to be as well.

Meanwhile back in Starling City, Felicity is very quickly moving up the corporate ladder, now taking Oliver’s old office. Palmer must really admire her tech expertise; but one has to wonder what it’s all for. In the final moments of this segment, we find Palmer looking at a bunch of plans from Queen Consolidated’s Applied Science Division labeled O.M.A.C. Initially I figured this would somehow lead to Palmer becoming the Atom; but after looking up what O.M.A.C. is in the DC universe, it seems we have a problem – or at least someone does.

In the comics, O.M.A.C. stands for Observational Metahuman Activity Construct and was initially a program that could turn and control regular people into mindless super soldiers in order to hunt down metahumans. Now I’m not entirely sure it’ll keep that idea in Arrow considering ‘metahumans’ are more The Flash’s territory and are a relatively new addition to this universe. Though regardless, it certainly shows a higher hand might be at work here in the coming episodes. Perhaps this will connect with Amanda Waller and whatever devious underhand role she’s being set up for – between this episode’s mission and Oliver’s flashbacks.

This was definitely an emotionally charged epsode; but things are only going to get worse next week. With Felicity making a trip to Central City to visit Barry and Malcolm Merlyn returning to Starling, you’d think that’d be enough reason to fear. Though the most pressing issue will be Nyssa Al Ghul’s return to Starling seeking Sarah. There’ll be hell to pay and even more if Oliver doesn’t do his job.