Marvel’s second season of Agents of S.H.I.E.L.D. has certainly kicked it into high gear with the past few episodes. Between the brilliant writing, heart racing action and high stakes of everything being connected, Season 2 is turning out to be everything we wanted it to be and more – and this week’s episode was no exception. As the title suggest “The Things We Bury” was all about things that have long been covered up; but as Reinhardt/Whitehall said “Nothing stays buried forever”. How will our agents cope in this changing environment? Let’s take a closer look in this week’s Declassified!

The Things The ‘Aliens’ Buried – The Diviner Myth:

After finding a puzzle piece here and there all season, we finally have some of the answers about what the mysterious Obelisk known as the Diviner is. According to Whitehall and Skye’s Father, this artifact was brought by an alien race eons ago. Though it wasn’t merely a weapon; but rather something that could raise up those it considered worthy.

The side-effect of being turned to stone and dust upon touching the artifact isn’t it’s intended use; but merely a defense mechanism. If you are deemed unworthy and thus a threat, you are incinerated; but those worthy of the diviner will be blessed and remain unharmed by it. Though the legend doesn’t end there. If one of the people chosen by the Diviner brings it to a specific city of legend, something much “cooler” will happen. Whereas it’s not explicitly said what will happen, all the signs point to a mass level annihilation of mankind with only those deemed as ‘worthy’ being transformed into far more superior beings.

A popular theory that has gained more and more merit with each episode is that the Diviner is a Terrigen Crystal and this is already starting to set up for The Inhumans, a Marvel movie in the works for 2018. How and if this will feature into the film remains to be seen since the season isn’t over, there no confirmation yet, and the film is 4 years away. Though if it does prove to be true, this would be the first time something in the Marvel TV universe affected the Cinematic Universe – rather than the other way around.

Though it wasn’t just the Diviner that we got some backgroud on this episode. After seeing Reinhardt in the past and Whitehall seemingly un-aged in the present, we’ve finally learned how it all happened. As it turns out the raid on Reinhardt’s lair and his experiments with the Diviner all took place immediately following the events of the first Captain America. With Red Skull having fallen, Agent Carter and her people headed to take down Whitehall and put a stop to the awful experiments he was conducting. 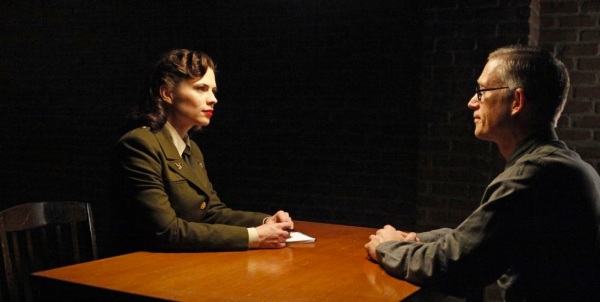 He tried to make an agreement with Carter about getting pardoned and working for them; but after everything Reinhardt had done Carter deemed it much better to bury not only Reinhardt but also all of his work as well – rather than upload it to S.H.I.E.L.D. servers. It’d be 44 years until he was pardoned by Secretary Pearce – the big bad from Captain America 2: The Winter Soldier – and released by a Hydra agent.

With Hydra never forgetting the work he had done and strived to complete, Reinhardt was brought in to find that Hydra had raided a small village nearby and discovered a woman – the same woman who showed immunity to the Diviner 44 years earlier un-aged. Whitehall then spent an unknown amount of time dissecting her bit by bit in order to find out what made her so special. He never discovered what this was, but in the end he transferred so much of her DNA to himself that he was able to gain back some of the years he’d aged and thus assume the new identity of Daniel Whitehall. Though unbeknownst to Whitehall, that woman he eviscerated in 1989 was special to someone else as well.

During the Ward vs Ward moments of this episode – we’ll get to that in a moment – we learned that Grant ward really was telling the truth about his brother. So that means he was telling the truth about Skye’s father as well right? Well it looks like it because this episode we finally got a glimpse into his tragic past. He does blame Coulson as S.H.I.E.L.D. for taking his daughter; but there is someone much higher on his punish list – Whitehall.

Skye’s mother about to be dissected by Reinhardt

We’ve suspected this for a while since Ward said that it was Hydra who tore his family apart; but as we learned in this episode it was Whitehall himself who eviscerated Skye’s mother in order to gain some answers – and restore some youth. Considering how Skye’s Father delivered some of those lines about ‘looking your enemy in the eye’ – while looking at Whitehall – we knew he had a good reason to hate him. Even his tale of ‘The Diviner’ had this undertone of “I’m going to lead you into a trap you miserable animal”. Skye’s Father is one his own team; but he might not be the only one.

The Things The Ward Family Buried – Let It Burn:

A few episodes ago we got a brilliant juxtaposition between the two remaining Ward brothers – Grant and Christian. It was a moment to see which was truly the villain and who had potential to be good. Though whereas our first encounter left us with more questions, this one gave us the truth before we even heard the truth – let me explain. We didn’t have to wait for Christian Ward to admit to forcing Grant into killing their little brother because we found out what kind of man Christian was in talking with Grant.

While Christian and Grant were walking, it was hard to tell who’s the psychopathic liar and who’s telling the truth; but then Christian mentions how he was on his way to meet his wife. LIE! From this moment we knew Christian was full of it because we had just heard him on the phone earlier inviting his mistress to join him at the family cabin. At this moment of clarity, we no longer had to wait to hear who was telling the truth; but rather see how this would all end. So you can imagine our confusion when Grant and Christian embraced and decided to ‘head home’; but then we remembered what happened to their last home.

Grant was indeed tapping Christians confession; but not to just exonerate himself or expose his brother as a monster; but to also provide the perfect ‘confession/suicide note’ for what he had planned next. Grant might be the better of the Ward family; but he’s still a killer. So this time when he set his family home on fire, he made sure to succeed. With the planted confession from his brother, everything was ruled as a guilted suicide/double homicide of Christian finally killing his parents after admitting to killing his little brother due to childhood abuse and jealousy.

I honestly don’t believe Grant Ward is with Hydra. He’s probably just pulling another fake allegiance like Skye’s Father is. If anything, Ward and Skye’s Father probably have a much more shared agenda than anyone else right now – especially considering their both agents of chaos at the moment.

The Things The Team Buried – Feelings of Doubt, Inadequacies and Love:

Aside from all the big reveals this episode, we also found some things buried and resurface in the team itself. For starters, Mack is still uneasy about Coulson’s mental state. Whether he’s genuinely uneasy or is purposefully trying to spread deception remains to be seen; but no matter what Coulson speech conveyed last episode, his outburst just can’t stay buried just yet.

Fitz also got to experience things coming to the surface this episode as he returned to fieldwork after training to install a device in under 6 minutes. Fitz has been struggling under pressure all season, but now he took Coulson’s advice and focused on the action, while the action helped him think. Throw in a Hydra ambush and Agent Trip getting shot, and Fitz definitely had enough action/pressure to think under. No matter the brain damage he sustained and how it buried the old Fitz, he’s finally digging himself out.

Finally, we’ve seen a lot of great tension between Hunter and Bobbi this season – even before they were both on set together. We knew this was heading somewhere and now we know just where. The thing these two exes have ‘buried’ was their feelings for each other; but as we’ve seen throughout the episode “nothing stays buried forever” as we see these two hook back up after an interrogation with Bakshi goes south when he tries to commit suicide via cyanide poisoning.

Is it just me, or does anyone else now feel REALLY bad for Skye’s dad

In two weeks, Agents of S.H.I.E.L.D. will return with its midseason finale “…Ye Who Enters Here”. The action is about to come to a head as Hydra, S.H.I.E.L.D and the little chaotic outliers all come together to uncover a secret buried long ago. Who will rise? Who will fall? And will we ever find out what the heck happened to the Gravitonium?