If Arrow is famous for flashbacks, then this episode of The Flash began with a very brief flashforward. The Man In The Yellow Suit has been teased for weeks now; and Barry has finally caught up to him – or has he. With his true identity kept secret until the very last moment, this episode kept you guessing the whole way through. Though despite all these painful memories catching up, this was still a Christmas episode to be filled with hope. So let’s take a closer look at The Flash’s midseason finale aptly titled “The Man In The Yellow Suit”.

Living For The Past & Moving Forward:

After failing to catch/beat The Man In the Yellow Suit (MITYS), Barry had a very emotional conversation with his father where he felt he failed him. Before this, it was the MITYS who was responsible for his father being in prison. Now, it was Barry’s fault because he couldn’t catch the MITYS and his father would remain in prison. This whole exchange was very similar to the conversation Barry had with Oliver in last week’s Arrow where Oliver was drowning in self-pity. Like his son last week, it was Barry’s father’s turn to snap his son out of it and remind him how things really are.

Barry’s father makes him realize that everything Barry has done now has been because of that night and that man. It’s why he joined the police, studied criminology, and so much. More importantly, it’s why Barry never told Iris how he felt. In the end, Barry has to stop living in the past and move forward before the MITYS takes anything else from his life. This is what leads Barry to tell Iris exactly how he’s always felt about her, which still seems unresolved by time the episode ended.

The final bit of advice to Barry comes from his other father figure, Joe. Barry admits that he lost to the MITYS because he was afraid; but Joe reminds him that he is the light of their lives. He is hope. Joe reminds Barry that he’s seen more darkness than any other man will and yet never lets it dim his soul. This advice also mirrors what Barry told Oliver last time – though even Oliver isn’t as pure as Barry is. The world might need The Flash; but Joe needs his Barry.

The Man In the Yellow Suit – Two Suspects, One Red Herring:

As I mentioned during the start of this season, The Man In The Yellow Suit would appear and it might possibly be Eddie due to his comic alter-ego being The Reverse Flash. Though lately, many of Dr Wells comments had a sinister undertone. Could this mean that he is the Reverse Flash – an alternate name for Reverse Flash? This episode did a brilliant job of making both equally suspicious; but in the end one had to be a Red Herring – “something that is intended to be misleading” – but which?

We know that the Reverse Flash knows all about The Flash/Barry. Though he also has details sensitive to the case as well as knows about Iris and her position as a bargaining chip. Dr Wells is close to Barry; but if Eddie is from the future also, he could know this as well. Though there were key moments in what the MITYS said that pointed to each distinctly.

So which would it be? Was all Dr Well’s dubious habits and secret agendas a red herring to take suspicion off Eddie. Or was Eddie’s name – the alter ego of Reverse Flash in the comics – the red herring to take suspicion off Wells. When the Reverse Flash attacked both Eddie and Wells, it seemed like both were cleared; but again it was all just an act. Somehow Wells was able to be in two places at once.

Though it wasn’t really Well’s revealing the Yellow Suit that made us certain it was him; but actually a few moments earlier when he asked Sisco and Caitlin why he wasn’t informed Ronnie was back. HOW could he know this? Sure, they could have told him; but with Ronnie saying to stop looking for him it seemed like a pretty open and shut case. Though it was also, HOW he said it. The MITYS accounted for everything, except Firestorm – and Wells was far too upset to be just feeling ‘left out’. Remember Wells is from the future, so he knows all about Ronnie becoming Firestorm. He just didn’t anticipate this complicated hero arising so soon.

Ever since Ronnie died, Caitlin has been asking herself what she would give up in order to see Ronnie one more time. Well now she’s seen him again; and wishes she hadn’t. The man she met in the corridors wasn’t her fiancé; but merely called himself Firestorm before burning himself an exit. Though if The Flash reminds us of anything, it’s that at the darkest hours there is always hope.

When Barry was getting pummeled by the MITYS, Firestorm returned to save Barry’s life; but this time it was Ronnie. Somehow Ronnie is still in there, yet is struggling with another consciousness inside him. This of course is the character of Firestorm, who must reconcile between two people inhabiting one mind. He might have warned not to look for him; but we know he will play a big role in the upcoming episodes. 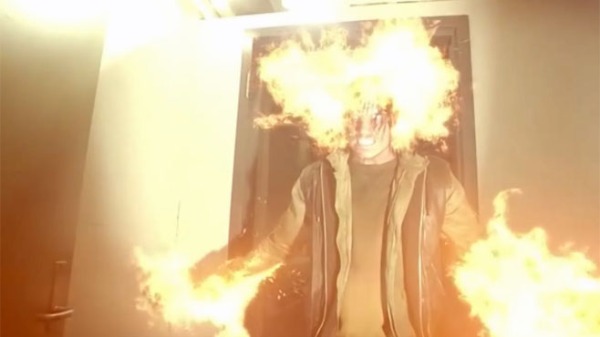 Initially I wondered it Caitlin Snow would follow in her comicbook counter part’s footsteps and become Killer Frost; but after what happened this episode with Eddie not being the MITYS/Reverse Flash we should be wary of expecting this show to follow comics that closely. It seems to be taking liberties like Arrow and Marvel’s Agents of Shield – which is a good thing.

We already know that Doctor Wells is going to great lengths to not only create the Flash; but also to protect him. Though now it seems like there is no length he wont go to in order to make the Flash rise – including killing his mom as motivation. What is Well’s angle in all of this. We’ve also seen him doing work on Gorilla Grodd – a major Flash villain – so what is it? Is he just making sure the future happens? Do we need a Doctor Who crossover to explain paradoxes?

When The Flash returns, we know he and Barry are going to be working towards the Flash getting faster; but what of everyone else. Are they expendable? He’s already shown dislike for The Arrow; but now it looks like he might not like Firestorm either. Will he try to capture Ronnie to help him or make him worse? Oliver Queen called it last week when he said something was off about that guy; and now he has an apparent remote-controlled super-powered suit infused with Tachyon particles to make it invincible. Villain? Anti-hero? Psychopath? We’ll have to wait to find out; but maybe the best Barry – like most heroes – is born from tragedy.

It’s been hinted at for a while that Time Travel will be coming soon. Not just as in already happened; but I think Barry himself will even do some. When the series first premiered I had a horrible hypothesis that Barry was actually there the night of his mom’s murder and he was fighting with the MITYS and couldn’t save him mom. This could also explain how younger Barry was wooshed away. Though I didn’t think much more of it because it seemed outlandish.

Well now Cisco just mentioned how he noticed the sparks the Flash and Reverse Flash give off are Red and Yellow – what Barry saw that night. Was Barry there? Or is there another Flash out there? There have been a few different Flashes in the comics so it’s possible.

It looks like the Reverse Flash powers aren’t Dr Well’s but rather part of the suit itself.

The next half Season of Flash is going to get intense. The ground work has been laid wonderfully this past half season; and whereas things seemed a little too silly at first, the Arrow/Flash crossover helped focus this show. I expect big things from the second half, especially now that Eddie is in on the Metahuman secret. The Flash Task Force was apparently cooled as well, so it looks like roadblocks will be lifted while new ones arise.

3 thoughts on “A Closer Look: The Flash – “The Man In The Yellow Suit””