The Flash returned tonight after its insane midseason finale; and the themes of revelations and new threats continued as the world now learns of the Flash, the Firestorm mystery deepens, and the Rogues Gallery begins to form. Though despite all these huge moments, there were also some beautiful and painful subtlies that should be touched upon a little more. So let’s take a Closer Look at The Flash, “Revenge Of The Rogues”

As the title of this episode, we should start our analysis with a closer look at the Rogues. As some of you may know, the Rogues Gallery – or just The Rogues – is a group of Flash villains that team up to take down The Flash. This is a very similar to the Legion of Doom in the DC Universe, though a more appropriate parallel would be Spider-Man’s Sinister Six. Regardless, this episode set the groundwork for that as we find Leonard Snart (Captain Cold) return with his new ally Mick Rory (Heat Wave) – whom you might have seen in the post credits for Episode 4 earlier this Season.

Let’s face it, fire and ice don’t really mix – especially when you have Rory’s chaotic natured paired with Snart’s analytical mind – and yet it works very well here as Snart is able to reign in Rory’s fiery disposition. Though Snart’s plan wasn’t just to steal some artwork or cars; but something much larger – in fact, he pulled off a perfect Xanatos Gambit. Returning readers will know how much I love Xanatos Gambits; but for those who don’t, a Xanatos Gambit is named after the character by the same name in Gargoyles (’94-‘96) and describes a plan in which both victory and defeat result in success. How Snart pulled this off in Flash is actually quite brilliant and will be explored further in future episode. For now though, his plan was this:

In the end, we see Snart and Rory being broken out of the convoy by someone Snart refers to as “Sis” – while Rory can only ogle at something ‘cool’. Well in the comics, Snart’s sister is named Lisa and she is known as The Golden Glider. Like her brother, The Golden Glider doesn’t have any powers of her own; but instead relies on high tech gadgets – including a pair of skates that make their own ice and they move. How The Flash will work that in remains to be seen; but she is the third person to join the Rogues Gallery – and next episode should give us the Fourth – the Pied Piper. And even if – and when – the Flash defeats the Rogues, Snart’s plan will keep working because it’ll show others that this is a group to be feared and can get much more done as a whole than individually.

We might know that Doctor Wells is the Man In The Yellow Suit – I mean Reverse Flash -; but Barry and the team doesn’t. This will certainly lead to some drama as more as more confusion as Dr Wells continues to make it his goal to make Barry stronger than Reverse Flash; however, there is one major aspect we didn’t take into account: Barry’s admiration for Wells.

In the premier, we learned of how Barry always admired Dr Wells – before the Star Labs accident – but in case you forgot, Barry took some time to remind us this episode when Dr Wells apologizes for pushing Barry to train harder rather than take down Captain Cold and Heat Wave. There was a time when Barry would pay money just for Wells’ autograph. Though now he not only gets to work with him; but also gets to be his partner – his “friend”.

Imagine someone famous that you look up to and respect, now pretend that something brought you two together and now you see each other on a daily basis in a friendly atmosphere. This would be a dream come true and that is exactly what Barry is experiencing working with Wells despite everything else. So imagine how crushing it’ll be for Barry when he finds out Wells is – or at least connected to – the Reverse Flash.

Though despite all these upcoming painful feelings, we have to remember there is a strange duality about Wells. When Barry calls him a “friend”, he gets choked up for a moment. Additionally, when Barry was facing off at the start of the episode with Cisco’s missile droid, he was starting to get up when Barry fell. You could say that maybe he was anxious with anticipation because he somehow KNEW Barry would loop the missile back round at the droid; but a moment later he quickly says “NO!” when Cisco offers another round with lasers this time.

Whatever Wells’ agenda is, he does worry about Barry and want him to become stronger. Who is Wells from the future? Is it possible that Wells is the future Barry? In the midseason finale there were some comments about them being alike. It could also explain why he feels Barry (his younger self) must be protected. Whatever Wells’ role is in all this, we can be sure of 2 things: It will hurt Barry immensely when he learned the truth about the Reverse Flash; and that Dr Wells DOES indeed care for Barry as well.

Iris – Matters Of The Heart:

While Barry’s relationship with Dr Wells will go south at some point, there’s a chance his relationship with Iris might get better. After trying to ignore what happened and wishing things were back to normal, Barry realizes – with Joe’s advice – that pretending nothing happened is how he got into this whole mess in the first place. So Barry told Iris that he supports her and Eddie completely and knows that things will be weird for a while; but they’ll be best of friends again soon enough. It’s still really hard for Barry to see them together; but he cares about Iris above all else.

Where things might get interesting for Barry is that Iris might come around and realize she’s liked Barry all along. Barry was honest with her; but it’s hard to see if Iris is being honest with herself. The groundwork for Iris having feelings for Barry is being set as we see Eddie asking her if she’s really sure about moving in right now. The only thing that worries me is that – as Oliver said in “Flash vs Arrow” – the heroes don’t get the girls.

Now sure Oliver Queen has made out with his fair share of lovely ladies; but they’ve never ended well. Iris doesn’t have powers nor the drive to be a fighter. Barry’s already suffered the loss of one woman he loves in his life. The chance of it happening again – this time to Iris – seems like a certainty, whether this season or next. Here’s hoping these two can have at least one moment of happiness together before that time comes. 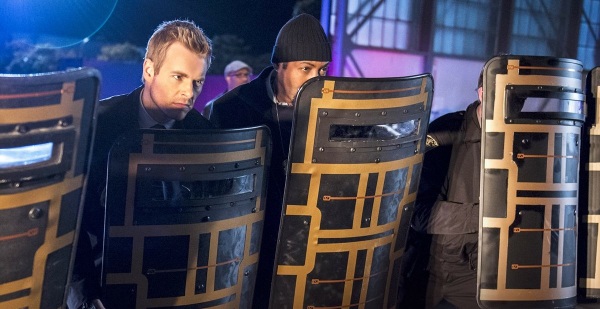 Speaking of tragic couples, Caitlin is still trying to figure out what happened to Ronnie. Sure he has powers now; but what is all this Firestorm stuff he’s saying? Well it turns out that it’s not his new nickname for himself – though I’m sure Cisco will adopt it for him – but it’s actually a reference to a secret project that sought to rearrange materials on an atomic level.

The project known as F.I.R.E.S.T.O.R.M. – Fusion Ignition Research Experiment & Science of Transmutation Originate in RNA and Molecular structures – was headed up by a man named Professor Martin Stein who liked cutting corners. What happened next is still unclear; but it resulted in the army coming to take all of the research and Stein going missing. What it Stein’s connection to Ronnie?

Well the HOW is still unclear for this universe; but in the comics Firestorm (the character) is the fusion of Stein and Ronnie. Again, it’s unclear how they’ll do this in the show since it looks like Ronnie was in the Particle Accelerator by himself; but his moments of madness are most likely attributed to Stein’s voice bouncing around inside his head. Firestorm will be a large part of this upcoming season, and – hero or villain – everyone better watch out. 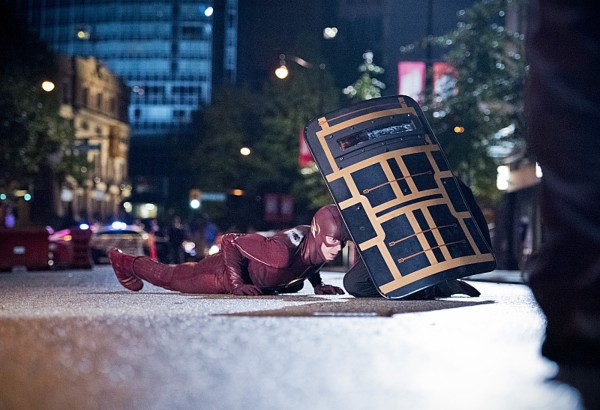 As the episode comes to a close, we find the second half of The Flash’s first season off to an awesome start. Central City now knows the Flash exists and that he’s a hero. Also, Barry is moving back in with Joe, ensuring that Joe gets his daily dose of Barry’s light presence. I’m expecting awesome stuff from this second half with a fair balance of light humor and heavy situations. As such, I will now be covering the rest of The Flash’s second season each week.