Move over Ben Affleck, because the new trailer for Netflix and Marvel’s Daredevil is NOTHING like the old 2003 movie. In fact, judging from this trailer, Daredevil (2015) will bring a whole new level of dark to the Marvel Cinematic Universe. Throw in an incredible cast and some impressive aesthetic choices, and Daredevil will usher in a whole new side to the MCU with its Defenders universe.

Marvel Goes Dark – Forgive Me Father. For I WILL Sin

If you asked someone to compare the Marvel Cinematic/TV Universe with the DC TV Universe, the answer would be a simple division of levity. While Marvel has had some very powerful and dire moments in their universe, the style of shooting has always been light to remind the viewer that they are on this journey of good vs evil. DC on the other hand – at least as far as Arrow is concerned – has focused much more on the darker sides. Sure there is the occasional joke in it; but the majority of filming is darker – usually taking place more at night and in the shadows.

Judging by this trailer, Netflix’s Daredevil seems to fit in more closely with the Arrow–verse than any Marvel Universe. In fact, when Matt says that he’s asking forgiveness for what he’s “ABOUT” to do, it’s a nice little allusion to how he is going to go against what the MCU has been up until now. Then again, you also have to take into consideration the TYPE of hero Daredevil is. He’s not the hero showing up on the scene and fighting the good fight while all watch and support. He’s a vigilante – a character type that the Marvel Cinematic Universe has yet to fully explore. Agents of S.H.I.E.L.D. sort of explored this early on in Season 2 after S.H.I.E.L.D. was labeled a terrorist organization; but Daredevil will take it SO much further.

Just from this minute and a half trailer we can see a much larger focus on blood than any of the other entries in the MCU currently. Though this darker nature doesn’t only have to do with the ‘type’ of hero Daredevil is; but also with WHERE it’s taking place. This isn’t the lands of Valhalla, or Washington DC or even midtown Manhattan. This is taking place in New York’s ‘Hell’s Kitchen’, and even though it’s much nicer now, this show will feel more like the “Hell’s Kitchen” of the 60s – a place that really lived up to the name.

Daredevil is of course set in the present and is also a part of the larger Marvel Cinematic Universe; but we’ve yet to see how it will connect in. Whether we’ll see a news broadcast here or there about Ultron or get some cameo’s in the culminating Defenders film, there’s tons of possibilitys. Though immediately connecting this show to the MCU isn’t the primary concern here. This series is more focused on tying into its own ‘Defenders’ sub-universe of Marvel – of which Jessica Jones, Luke Cage and Iron Fist will be included.

Seeing The World From Murdock’s Eyes:

Besides this show’s darker feel, there are two other very exciting things about this show that the trailer hints at. For starters, Daredevil is blind – you should know that by now – though his other senses are so heightened and trained that he is able to see without seeing. It seems as though this show will have moments where we actually get to see from his point of view – or at least feel. 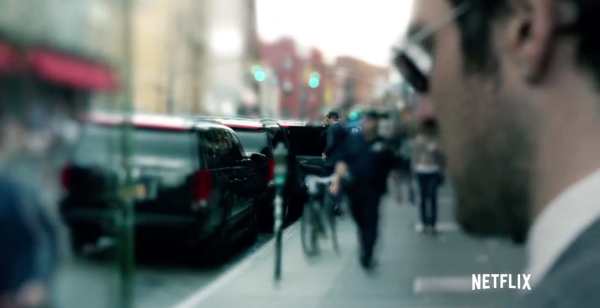 In the trailer there are several moments when the sound is slightly distorted and jumbled. Just random editing or something more? Well towards the beginning of the trailer we see Murdock walking the streets of New York with some very shaky and murky film style. This could be purposeful as it signals Matt Murdock using his heightened senses to discover things about the world around him. Sure it looks a little distorted; but this would give us his point of view as well as focus upon something of interest – much like how Spidey-sense is showed in the Spider-Man films. Additionally, the shrill sounds intermixed with talking, cab honking and other city sounds would help place us in the loud gritty ‘Hell’ he is currently navigating through.

The other interesting thing about this show will be it’s pacing. This is Netflix and the entire season will become available starting April 10th. Will you marathon it in one night? Watch one a day? One of the big things affecting Marvel’s Agent Carter right now is its fragmented pacing with weeks off and episodes being interrupted. Any momentum it starts to gain is almost immediately undercut. Netflix’s Daredevil will have NO such problem. Once you get hooked, you’ll stay hooked – and judging from this trailer, you’ll be hooked from episode 1.

Good Vs Evil On Two Fronts:

Story-wise, there are many things that make Daredevil and incredible character. He might be called ‘the man without fear’, but he does have fears. The trick is that he isn’t afraid to face them, to overcome them and use everything at his disposal to make up for what he lacks. In addition to this, he also fights evil in his personal life as well as lawyer Matt Murdock. He will fight the villainous Kingpin (played by Vincent D’Onofrio) in the courtroom; but when that fails he will don his black suit and fight him from the shadows as well. Oh and don’t worry, later on in the season Murdock will indeed upgrade the suit to the more famous crimson colors.

It’s quick; but you can see Kingpin approaching Murdock in the trailer. He’s a mob boss. He’ll show his face, but his actions will always have a ‘cover’ so no one can indict him.

So what did you all think of the trailer? Sound off in the comments below and be sure to stay tuned here and Follow Me on Facebook for more updates as well as series analysis when it comes out.