Another week, another absolutely incredible episode of The Flash. I genuinely don’t know how they keep doing it, as this week’s was by far one of the most jam packed, well-written episode yet. New love interests, shocking revelations, a retuning villain or two and drunk Caitlin. There was so much to see and love about this episode, that I can’t waste anymore time with this intro. So let’s jump right in to “Crazy For You”.

The Meaning Behind “Crazy For You”:

“Some people are worth being crazy for” – Barry to Caitlin

As always, the episode title is always a great glimpse into what the writers intended to be the main focus – or theme – of the episode, and “Crazy For You” was no exception as the theme of ‘crazy love’ was everywhere. In fact, almost every character’s story line – except Joe and Dr Wells – dealt with the person they were ‘crazy for’ and all the troubles that got them into. Each of the following sections will more or less tie into this theme, so just keep this idea in the back of your mind as you read through.

This week’s metahuman wasn’t so much ‘bad’ as she was misguided. Shawna Baez – nicknamed Peek-A-Boo – and her boyfriend Clay Parker might seem the Bonnie and Clyde crime duo; but Shawna actually didn’t want any part of it. After getting her powers, Shawna only wanted to break Clay out and start a new life with him outside of Central City. Sadly Clay’s debt to gangster Marcus Stockheimer complicated things. Though the seeds of a deeper complication were sown from the first moments of dialogue between these two.

When Shawna tells Clay that she saved him because ‘he’d do the same for her’, you can hear the awkward silence where Clay’s response should be. Though just like everyone else in this episode, Shawna was crazy for Clay and wouldn’t realize the truth of her situation until much later. This is especially ironic – or just well written – for Shawna’s character as Peek-A-Boo could only use her powers when she could see. So when she is later trapped unable to see, she also finds that Clay abandoned her – another thing that she couldn’t see coming.

The first half of this Season showed how Barry has gone crazy working his whole life to clear his father’s name and get to the bottom of that fateful night. So when the opportunity comes for Henry Allen to finally go crazy for his son, he’s all too willing to do so. It was extremely emotional seeing Barry and his father together without phones or glass in the way; but the most emotional moment would come after his father was stabbed.

After doing some inside scouting for Joe and Barry, Henry got stabbed by one of Marcus Stockheimer’s men. This of course leads Barry – I mean the Flash – to drag the perpetrator outside, get information out of him and then leave him for the guards to find and lock up again for a much longer sentence. Between this and his father’s last meeting with the Flash – when he saved Joe earlier this season – Henry knows that his son is indeed the scarlet speedster.

Of course Henry would offer some advice to the Flash about how his father would be worried and how he should be careful out there; but above all else he wants him to know, “that he’s a hero, and he’s saving a lot of live. But the most important thing to know is that his fathers proud of him” *chokes back tears* Ok, let’s move onto the next topic before I need a box of tissues.

Moving On – Iris Vs Linda:

“Look, I’m not an expert on love; but I think in order to move on from Ronnie, you actually have to move on” – Cisco to Caitlin

Barry: “Every time Iris falls, I race to pick her up thinking one of these times things are going to change; but things are never going to change. I’m always going to be the friend.”Cisco might have said these words to Caitlin; but the same advice would ring true for Barry Allen and his constant pursuit of Iris. For anyone who’s ever fallen for a friend, seeing the Barry and Iris dynamic is as sad as it is true. Through the episode we saw how Barry literally would drop everything to see Iris, help her in any way he could and remind her that he’d always be there for her. Kind sentiments that show how much Barry honestly cares for Iris, but as he said, he’ll always be just the friend.

Caitlin: “At least you’re not pining for someone who bursts into flames and wants nothing to do with you”

As we saw this episode when Barry was taking care of drunk Caitlin – helping her home, staying with her until she falls asleep, etc – Barry is a genuinely great guy. So he’s not doing anything for Iris with ulterior motive, he’s simply doing it to make her happy – yet this is also causing a tremendous strain on him. This of course leads to Barry and Caitlin going out and having an awesome night of drinks and karaoke – which is the honest cure to almost any ailment except hangovers of course. At the bar Barry meets Linda Park, who immediately sees Barry’s greatness. 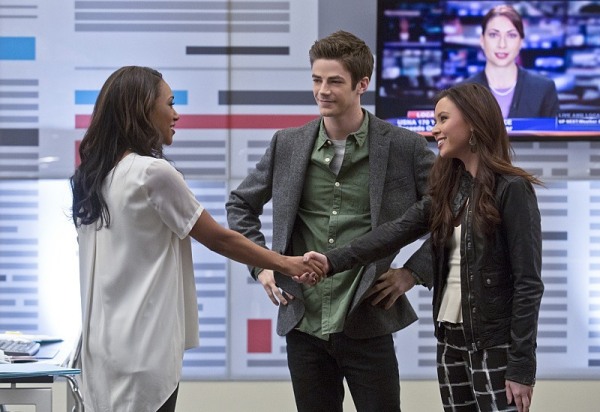 She might have only been on screen for a minute or two; but I already like the Linda Barry pairing – though the Cailtin Barry pairing is pretty cute too. That’s not important though as the episode concludes with Barry at Central City Picture News and Iris believes he’s there for her. Little to her surprise, he is there to pick up Linda who is a Sport writer there.

For all intents and purposes, she is Iris’s upgrade, and Iris definitely sees that as she is taken back by this revelation. She’s going to have something thinking to do now; but regardless Linda is a MUCH better romantic foil for Barry. No, that’s not the opinion of someone who’s been scorned. That’s general rules of chemistry. Just look at their first meeting and you can see that each have what the other needs. Linda is of course beautiful; but she has something Iris and Felicity don’t: confidence. She is straight forward and knows exactly what she wants, which can do wonders to bring Barry out of his shell. Meanwhile Barry is a very honest down to earth guy who genuinely cares. Seems like a win, win that I hope wins out in the end.

Life After Ronnie – Guilt And Moving On

Caitlin does a lot for Team Flash; but when it comes to having a social life . . . not so much. So in the spirit of everyone learning to move on, Caitlin got out of her ‘high school principal’ outfit, donned a shiny little black dress and joined Barry for some drinks and karaoke. The result was the introduction of drunk Caitlin, and she’s just adorable. She’s that friend who really overestimated her tolerance but just becomes the life of the party. What was even more special about this whole scene was seeing how much a friend with super speed is for dealing with drunkenness.

Sure the hangover the next morning might not have been worth it, but in the end it helped her move past Ronnie. Cisco on the other hand is the one having some trouble moving on as the guilt of Ronnie’s death still weighs heavily on him. He even went so far as to release the Pied Piper (Rathaway) just so he could learn more. Cisco put himself in a lot of dangerous position; but he was incredibly prepared for each. Though the final revelation that Ronnie and Stein had fused was too much and allowed Rathaway to escape by severing one of his ear pieces. 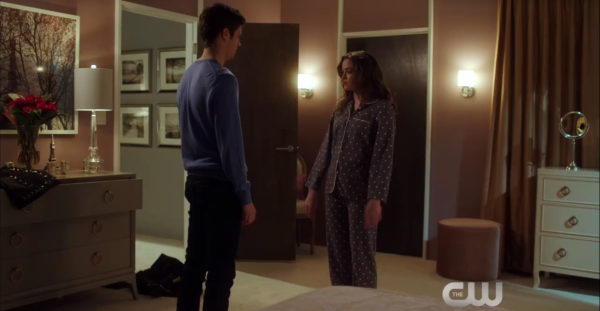 It was great seeing a different side to Caitlin this episode. And drunk her was really cute and funny.

This might have been a crazy idea from Cisco; but we learn that Caitlin wasn’t the only one crazy for Ronnie. Cisco saw Ronnie as his family – as he does everyone at Star Labs – so living with the guilt that he could have waited 10 or 20 more seconds has driven him crazy the past few years. We might not know how Caitlin would have reacted to the news about Cisco and Ronnie months prior; but after the night out Caitlin forgives Cisco and knows that what happened that night wasn’t anybody’s fault – Well’s included.

The Rise Of Grodd:

Ever since we saw that post credit of a younger Dr Wells experimenting on a gorilla named “Grodd” earlier in Season 1, we knew Gorilla Grodd – a major Flash villain – was going to appear sooner or later. I just didn’t imagine this much sooner. Sure there were some rumors spreading about a reappearance of this ape king but this surprise was truly spectacular and set the stage for just how dangerous Grodd is going to become.

The best way to explain Gorilla Grodd to someone who knows nothing about him or the universe is to say ‘think Planet of the Apes x10’; and that is exactly how this episode post-credits set him up. He might not be the mighty gorilla capable of enslaving minds yet; but we are able to see that his intellect is developing quite well from when we last saw him and he is already able to make basic words and shape designs.

He most likely won’t become a huge antagonist on the show until Season 2; but that’s the point. We’re seeing Barry slowly become the Flash we – and Wells – know he can become. So we must also see how one of the Flash’s major villains also comes to be all he can be.

I love that the Flash is being much more openly heroic and isn’t afraid to show himself anymore. Though could that lead to some problems with Iris’s photo in the weeks to come? Regardless, next week’s episode is certainly going to heat things up . . . Seriously though. Flash and the team are going to get to the bottom of this Firestorm business and try to separate Ronnie from Stern. I can’t wait to see what happens next. So stay tuned, Follow Me On Facebook and I hope you enjoyed this ‘Closer Look’.

PS: In closing, I just want to take a second and acknowledge Grant Gustin awesome singing this episode. Who knew? Seriously though, standing ovation and Grant, next time you’re in New York, I invite / challenge you to karaoke haha