Since Arrow has returned from its midseason premier, it has taken on so many different plot lines that it’s a miracle they can somehow keep them all neatly tied together. Yet they do so each week flawlessly! There’s so much to look into this episode, so let’s jump right into this closer look.

Episode Theme #1 – Coming To Terms With Laurel As The Canary:

With an episode title like “Canaries”, you knew this episode’s main focus was going to be Laurel’s new role as the Canary; but not everyone is okay with this life decision. A week has passed since Brick’s attack on the Glades, and Laurel is still going out and fighting crime. Despite the rest of Team Arrow supporting Laurel’s mission and feeling that she’s proved herself, Oliver wants none of it and labels what she’s doing as selfish and just another addiction. Though it’s not just Oliver who has to come with the new Canary; but also Laurel herself. She might have proved herself in the past few episodes as being able to hold her own; but it is through facing her own fears that she is able to put her sister to rest and become her own Canary.

After getting hit with Zytle’s potent Vertigo, Laurel starts to see ghosts of her sister everywhere she looks; and its important to note that EACH manifestation of Sarah reflects the person being mis-seen. For starters, Zytle’s Sarah is all anger and belittlement. Considering she’s currently fighting him, that would make sense; but this version of Sarah is also preying upon Laurel’s doubt in herself that Oliver pointed out earlier in the episode.

Prior to the fight with Zytle, Oliver told Laurel that she isn’t a hero and said that this crime fighting stunt was nothing more than the newest addiction in her life (a follow up to the alcohol and pill-popping we saw in Season 2). These words would still weigh heavily upon her during the fight with Zytle since she went out on this mission in a sense to prove Oliver wrong. Though when Laurel finds herself in danger and being nursed back to health by Felicity, she sees a different type of Sarah.

Felicity is the least threatening person on this show, so her version of Sarah would of course embody Laurel and Sarah’s sadness. From Sarah getting on the boat with Oliver almost 7 years ago to the two of them dating years later to how strong Sarah was, there were always a lot of deep-seated jealousy between the two sisters. Felciity’s Sarah is inadvertently preying upon the guilt that Laurel harbored towards her sister and making her feel like she wanted her sister dead just so she (Laurel) could become the ‘Canary’.

Returning Theme – ‘Fight For The Living , Not The Dead’ :

These initial visions of Sarah have beaten Laurel down and she is ready to hang up the jacket; until Felicity reminds her of what this whole crusade has been for. In “Midnight City”, we saw how Felicity returned to Team Arrow and proclaimed that they were going about this all wrong. If they wanted to live in this new world, they had to fight FOR the living – not for the dead. Roy referenced this idea in “Uprising” as well when he had to remind them that this is no longer Oliver’s crusade; but OURS. 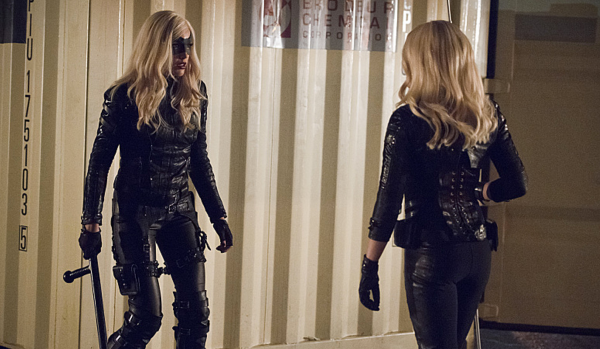 Similarly, Felicity her harkens back to those conversations and reminds Laurel that her crusade can’t be about ‘filling Sarah’s shoes’; but rather about being her own Canary. If she’s constantly trying to be the Canary, she’ll fail; but as the Black Canary she has a chance. This idea was even subtly hinted at by the way Laurel fights. She’s a brawler through and through – from boxing lessons to martial arts classes when younger. She couldn’t beat Zytle until she stopped relying on the staffs and went with brawler fighting. We learned in “Midnight City” that she only kept used the staff because Sarah used it and she’s slowly phased it out, so I wouldn’t be surprised if she ended up dropping it/them for good now that she is “The Black Canary”. Though with Laurel’s guilt over Sarah behind her, there is still one more fear she must face . . . her father.

This episode was full of risks; though it wasn’t the physical fights, but rather the internal struggles about confessing long held secrets. Before Laurel can truly move forward, she has to tell her father the truth about Sarah. As we saw from the last struggle with Zytle, the illusions of Sarah are behind Laurel; but its now her fathers grief that she fears most. If she is to truly become the hero she has to be, she must tell her father the truth and get this weight off of her.

It was the moment we were fearing for a while. Quentin Lance had no idea Sarah was dead. Yes he had his suspicions that the new Canary in town was someone else; but the shock of learning that he just lost his daughter Sarah AGAIN was one of the most heartbreaking – and well acted – scenes of this entire series. Though to be honest, the moment Quentin stumbled back I thought he was going to collapse and make this scene even more tragic. Thankfully he and Laurel just embraced crying. Its tragic and crushing; but in the end Quentin’s heart was strong enough to hear the news – ironically, our hearts on the other hand skipped a few beats from fear he couldn’t.

Though it wasn’t just Laurel who had to admit a hidden truth in order to become the best version of herself, but Oliver too. Oliver, Malcolm and Thea need all the strength they can muster to battle Ras, and that includes working together. After 2 and a half seasons of fearing this truth, Oliver finally admits to Thea that he is The Arrow. Rather than take this poorly or storming off because she’s been lied to – the way she usually does – Thea takes this revelation in stride and apologizes to Oliver for misjudging him as a flake and awful liar all these years. Though now that Oliver has let Thea in, he’s about to learn that there is no going back – for a lot of things.

No Going Back – Oliver’s Place In This New World:

I have seen many shows abandon plot and character development just so they could keep the same dynamic going for ever and ever – Lost Girl and Once Upon A Time to name a few. It’s dumb, unimaginative and honestly a complete cop out. So when I saw just how much Team Arrow had changed during the first 3 episodes of this arc, I wondered if lie other shows, Arrow would regress to the old ways now that Oliver is back. Well as a true testament to this show, they not only power forward, but also directly refute any whimsical ideas of EVER going back to the way things were before the midseason finale.

Oliver: “What the hell was that?”

Roy: “You think you’re the only person who can stand up for Thea?”

Oliver: “I’m trying to figure out why you’re standing up to me”

* Diggle tries to calm everyone down *

Felicity: “No, we need this. Oliver, you were gone. Dead, at least we thought you were, and we had to go on with out lives and doing that meant not doing things your way”

Felicity: “That doesn’t mean WE can go back. And you do not have the right to come back here and question everyone’s choices”

Felicity might have seemed a little annoying last episode; but this episode she was completely on point as her and the rest of Team Arrow let Oliver know just how much things have changed. Just as the midseason trilogy dealt with Team Arrow redefining themselves after Oliver’s apparent death, Oliver himself must now redefine himself and his mission now that his crusade has lived on past him. So what is this archer to do? Well much like Laurel, Oliver has to go back and face his fears if he wants to become a new stronger version of himself. Guess we’re heading back to Lian Yu – and Slade Wilson.

As we saw in the flashbacks, Oliver will do anything to protect Thea; but he isn’t the only one. When we first met Verdant’s new DJ Chase – the D stands for douche – in “Draw Back Your Bow”, we knew two things: he was there for Malcolm and represented everything Roy wasn’t. Both would probably want to kill him for touching Thea. In “Midnight City” we learned that we were correct and he was indeed there for Malcolm. So when we saw Roy and Malcolm tag team take down Chase, it was satisfying on so many levels.

Roy still loves Thea – that’s pretty obvious. The look on his face after stood up to Oliver for her only to see her rush off with Chase was heartbreaking. Though he will still protect her no matter what and fight so that she has the freedom to make her own choices. So when he burst in to fight Chase, that was exactly what we were hoping for. As for why Chase seemed to get the better of Roy, remember that Chase is a long trained member of the League of Shadows. He’s no League of Assassins Intern, he’s been trained like every other agent and even those have given Oliver a run for his money. Thankfully though, this was supposed to be a double fight against the one who’d try to harm her by two who you might forget truly care for her.

Malcolm’s done some pretty bad things, but as we saw last episode he shows promise of redemption. He will do what it takes to be the father Thea deserves, even if she doesn’t want him to be. He has a second chance to get things right. So when he jumped in to save Thea and help Roy, this was him once again fighting for his redemption. There was no hidden agenda. He simply wanted to protect his daughter – the way any real father would. In the end, I’d really have liked to see Malcolm and Roy run Chase through with two arrows; but he’s gone – and will not be missed.

Thank you for reading through this entire episode analysis. It was a lot of work, but I’m honestly loving how much depth there is to Arrow since its returned for the second half of Season 3. No fillers here! Next episode we’ll find Oliver and Thea coming face to face with their mother’s killer – and former friend – Slade Wilson. So be sure Follow Me On Facebook and here for the next ‘Looking Ahead’.

2 thoughts on “Arrow: “Canaries” – Looking Ahead”