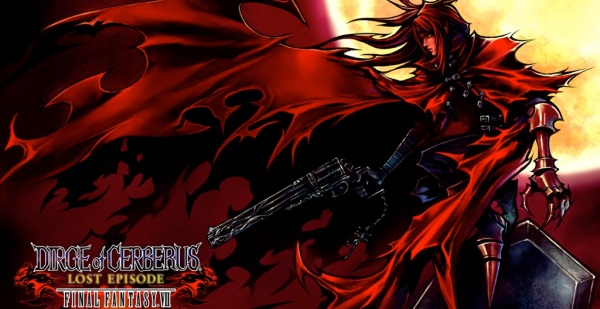 “And so the hound weaves the final chapter in this tale of life…” – Or does it?

If you asked someone to name the greatest video games of all time, Final Fantasy VII would probably be on that list. First released in 1997, this game helped shape an entire generation of gaming while pushing the consoles of the day to their limits. Many fans still beg for a full remake of the game; but Square-Enix refuses to do so until they make a game that FINALLY beats FFVII in terms of quality and sales. To be fair, we have gotten some new games to the FFVII series over the years; but while many will cite Crisis Core (2007), they are quick to overlook the game that started it all – Dirge Of Cerberus.

While certainly not as great as the original, Dirge of Cerberus is very often overlooked due to its unfamiliar play style and what some call a ‘limited’ storyline – quite the contrary! With enhanced graphics, deeply tragic story and hints at one final installment in the Final Fantasy VII series, Dirge of Cerberus is a tremendously important game that deserves a second look by both us AND Square-Enix itself.

Unlike other Final Fantasy games, Dirge of Cerberus abandoned the usual party/combat system completely in favor of a shooter. Whereas this style did seem a little unfamiliar to most fans of Final Fantasy, the move did make sense with Vincent’s character – who’s weapon of choice in Final Fantasy VII was always a firearm. His limit breaks – both the basic Galian Beast and final Chaos form – offered a fun and interesting break from this shooter style; but only momentarily. In the end the best damage could be done via proper customizations.

With 3 main gun types – handgun, machine gun and riffle – and various customization options, building up your own weapon according to your game preference was a great game mechanic. Mission replayability also allowed you to explore areas again and collect upgrades you might have missed. The problematic downside with this mechanic was revealed whenever you tried to replay levels from much further back. For example, if you went back to replay Level 3 in order to get the ‘Toy Gun’ – a joke item that can eventually be upgraded into the most powerful non-event weapon in the game – you’d still find it missing from your final inventory list. You would have to then head back to Level 4 and basically replay the ENTIRE game just to bring the updated weapons list into your current inventory.

Though the most memorable missions had to be the bonus Extra Missions originally available in the US copy of the game. Each Mission had its own style and scenario, which forced you to think outside of the box to defeat 1 – 100 enemies of varying difficulty. Many were exceptionally tough, but became incredibly exciting once you figured out the trick; but this could not be said of two Extra Mission types. The first of which were missions where you had to control the small stuffed animal cat named Cait Sith and had to take on hundreds of enemies and even bosses. Feats such as these were tough as it were; but making you complete them as a tiny plush toy was just cruel.

Though nothing could compare to Mission called “Misslebreaker Melee” in which you (Vincent) had to survive in a confined space while 3 helicopters fired multiple missiles at you, which you had to either shoot down or slash away with perfect timing. Sure they started slowly enough; but the last 30 seconds of this 2-minute gauntlet from hell caused many a control to be broken in anger. Whether heart racing fun or missions that made you cry, Dirge of Cerberus’s gameplay left us with a wide range of feelings that we still carry with us today.

From Hints To Realizations – Exploring This Dark & Twisted Tale:

Again, Final Fantasy VII was an enormous game in terms of scope and story so there were many elements that could only be ‘hinted at’ or mentioned briefly in passing that you might have forgotten in the long run. Dirge of Cerberus was the game that not only brought these subtleties and made them main story elements, but also reminded us of just how much we took certain elements of the original game for granted.

No, that’s not a dog turned human. That is a human turned dog #Disturbing

For starters, Dirge of Cerberus reminds us that Cait Sith is just the semi-sentient-yet-remote-controlled cat toy and not the entire cat/Mog robot combo. Though this is just a quick passing realization when compared to the horrors that are Hojo and the rest of Shinra. We knew Shinra turned some of their soldiers into monsters; but actually seeing failed soldiers converted into hound-like beasts starts to put into perspective how many messed up things went on in that company. Add in Hojo’s crazy rants and this game fills in most blanks you might have missed from Final Fantasy VII.

The biggest story realization of this game was the connection between Sepiroth, Lucrecia, and Vincent himself. Dirge of Cerberus not only explores Vincent’s history with the Turks and how he came to be experimented on by Hojo; but also how Vincent’s father was Lucrecia’s mentor before he died in an accident – a factor that made her feel guilty during their relationship. Though the depth of the story goes even further as we learn why Vincent sees Sepiroth as his sin as well and a constant reminder at how he failed Lucrecia. It’s a truly tragic tale and reminds us why Vincent is the most tragic character of this series.

The Graphics We Had Been Waiting For:

They might not look like much today; but at the time Final Fantasy VII’s graphics were some of the most impressive around – if not THE most impressive. From incredible summons to terrifying monsters, there was so much about this game to love visually. So just imagine what it’d be like if these graphics were updated to reflect current standards! Well that is exactly what Dirge of Cerberus represented in 2006 as the first FFVII game since the original. Sure Crisis Core would later expand upon these graphic improvements; but Dirge of Cerberus was the FIRST!

Just look at how Vincent’s Galian Beast and Chaos Limit Breaks were updated from their original ’97 versions. Though it wasn’t just detailing that this game revealed, but also the improved scaling. The town of Kalm was a relatively small town in FFVII, yet in Dirge of Cerberus you really saw how this city could come alive. This was especially true for Shinra Mansion, one of the most enigmatic areas of FFVII – as well as the place you first encountered Vincent in the original game.

One of the most iconic aspects of any Final Fantasy game is the soundtrack; and despite it not playing out like a regular Final Fantasy game, Dirge of Cerberus is no exception. From action packed battle themes to hauntingly beautiful level tracks, much of this game’s soundtrack is just as memorable as the original. 9 years later and some of these songs are still in my playlist.

Though the most striking tracks of this game are from Japanese musician, singer and songwriter Gackt. One only needs to listen to “Longing” or “Redemption” to realize these sound much more Rock than Final Fantasy-inspired; but despite their unorthodox sound, they merge perfectly with the final levels of the game. The whole game has made you decide between stealth and controlled assaults; but this time it’s all about power as you control the mighty Chaos. The pairing of these fast-paced final levels along with Gackt’s “Longing” offer the perfect cathartic release to bring this game to a close. Though music wasn’t Gackt’s only role in this game’s conclusion.

The Story Isn’t Over Yet – G Ending:

Hidden throughout the game are a series of files called G Reports. If you manage to collect all of them, you will be rewarded with the post credits “G Ending”, which revealed the mysterious character G – based on and portrayed by Gackt – finding a fallen Weiss – the main antagonist of the game – and telling him “It is not yet time for slumber, we still have much work to do… my brother”. Wait, WHA?!?!!? Who is this character who also has only one wing – like Sepiroth? What work must still be done? Clearly this isn’t the ‘Final chapter in this tale of life”.

Well as for who this is, this is Genesis Rhapsodos a solider from the time of Sepiroth and Angeal that would be explored more in the following years prequel to Final Fantasy VII titled Crisis Core. The end of Crisis Core actually bridges the gap between its end and Dirge of Cerberus as far as explaining who Genesis is and how his cells were used in the Deepground experiments that caused most of the struggle in this game. Though the question still remains, what else does Genesis want to achieve? He not as crazy as Sepiroth and did have good intentions to an extent; but his presence does allude to there still being one final part of the Final Fantasy series to tell.

Will we ever get that still unexplored ending to the story? Considering it’s been quite a few years, who know? Although there was almost a 10-year span between FFVII and Dirge of Cerberus, so anything is possible. Either way, Dirge of Cerberus might not have been the best game; but was instrumental in leading the expansion of the FFVII tale far beyond its original confines. For those who have played it, it’ll always hold a place in their hearts and minds; and that is why it holds a place in the archives of Ancient Awesomeness!