There’s only one more episode until The Walking Dead Season 5 finale, and this episode brought the tension higher than ever before. The group’s future at Alexandria is shaky, Rick’s fate seems sealed and there are still unknown threats amounting outside the walls. If there was ever a time for the mysterious W group to strike, their window is now. So let’s take a closer look at this episode before next week’s insane 90-minute Season Finale.

As I explained last week, each of these last 5 episode titles come from a Sound And The Fury reference Dale made back in Season 1. Though beyond this, each of these episode titles of course have their own meanings within the course of the episode, and “Try” was no exception. The obvious answer to this is seeing how Alexandria and Rick’s group are “trying” to work together and come to an understanding of how things are supposed to be run; but just like last week’s episode “Spend”, there’s another meaning that describes this episode much better.

We’ve seen Rick’s group “try” to fit in for the past few episodes; but that isn’t what we really see here in this episode. Instead we find old habits returning as each of the patience is slowly being tested with the growing blindness the residents of Alexandria show. This episode’s focus is much more upon how the situations in Alexandria are ‘trying’ their patience. Sasha’s already gone off the deep end. Michonne is feeling that battle hardened warrior surge up again inside her. Rick is … well Rick’s just done with everything.

Though we come full circle when we remember what Rosita tells Michonne that it’s not about forgetting; but rather not giving up. You can still keep your strength, skills and survival instincts; but you have to also realize that you can do that without giving up. Michonne is still a badass; but she is doing so without her sword. She still has the heart of the warrior; but she isn’t the lone sword woman anymore.

Both Alexandria and Rick’s group patience is being tested with the other; but while some break (Sasha, Rick, Pete, Nicholas, Gabriel), other are doing extremely well at keeping their cool (Carol, Deanna, Michonne, Glenn). This is especially true for Deanna, who despite getting two people saying Rick’s group is bad and losing her son still plows ahead with a calm measured approach. She even questions Nicholas’s story since his return doesn’t fit with his lies. She’s smarter than she lets on; and in the end I think that’ll serve our heroes best.

So what was the importance of that random red balloon Rick kept seeing? Did he stumble into The Sixth Sense or something? Well, not really. You see a red is a symbol for passion, rage or just strong feelings in general. As for the balloon, that can usually stand for hope, something to look up to. So when Rick is seeing this red balloon throughout the episode, we see that his emotions are growing to dangerous levels; yet he still sees the ‘hope’ for this community and keeps these feelings in check. That is why he tells Pete to ‘keep walking’ after first seeing the red balloon. He wants to shoot him; but he’s reminded of his ‘hopes’ of this place and holds onto it.

He continues to see this balloon at other intervals in the episode and we see how he is slowly breaking as the intense feelings get stronger and stronger. His want to rescue Jessi, his hatred for Pete, his anger at Alexandria not getting it and letting things persist – all of these are making him turn red; but it is still his ‘hope’ for the place that keeps him – like the balloon – grounded. So when we see the balloon go flying off, it’s no coincidence that this happened during the fight scene. Rick has lost all grounding and hope for this community, and now he is just the extreme emotions he’s been trying to hold onto. 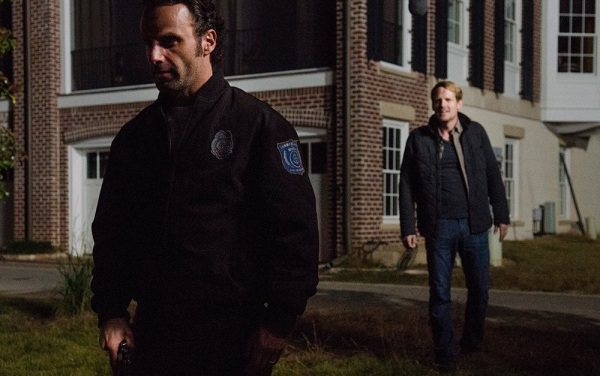 Wait, where are the 98 other Luft Balloons? What’s next? Rick “sees dead people” SO DOES EVERYONE ON THIS SHOW! lol

Red Balloon’s aside, there was another item to keep a watch out for – or rather an item to see broken. That’s right, last week’s episode gave us the Broken Window theory, where if ‘you keep the windows intact, you keep society intact’. So seeing Rick and Pete go flying through the window was no coincidence. With that window broken, we can just imagine what new breaks to society will follow.

This Is Their World, We Just Live In It:

Deanna and the other residents of Alexandria might think that they stand as the spark of civilization; but the harsh truth is that this is still the world of the walker. The basic conflict of Rick’s and Deanna’s groups boil down to this differing of outlooks. We’ve seen in the past how people who weren’t fit for this new world – or rejected to acknowledge the price of living in this new world (ie: Tyreese) – have paid the price. It’s all about walking the fine line between being civilized; but also knowing how to fight and take the world as it is, not how you want it to be.

This episode brought the tension of these viewpoints to a head and next episode will deal with some of the fallout for that as we see Deanna asking the residents about Rick Grimes and contemplating the ideas of exile. Though Alexandria is about to realize that their idea of the world isn’t as civilized as they had hoped. It is a harsher world out there and they’ve seen nothing yet, because pretty soon the monsters of the nightmares are about to take over.

The hints have been building this season; but this episode brought the two midseason long foreshadowings front and center – the W’s and the walkers. We’ve been struggling with the meaning of the W walkers for the entire half season and now Rick and his group are aware of them too. The same W-marked walkers who were found outside Noah’s camp are now closing in on Alexandria. Even more so, we the viewers recognized that the mutilated corpses are also a direct tie-in to Noah’s camp as we saw the victims brutalized after their walls were knocked in. Whoever attacked Noah’s camp is now setting their sights on Alexandria – another walled camp – and they seem to be amassing an army.

This mid season we’ve seen less stray walkers and more mini hordes. Sasha has been out hunting them for days; but it seems as though their numbers are growing. In case you didn’t notice this, Aaron even points out their growing numbers in areas that were usually clear. While Enid and Carl hid in the woods, the horde that passed them all had the W marks as well; and as the episode closes we see Sasha taking out more and more walkers that approach the walls. Their numbers are growing and by time all is said and done, it seems as though a mega herd might be heading to the walls of Alexandria – but will they precede or follow an attack by the mysterious ‘W’ Group?

To Sasha isn’t coping well to life is Alexandria is … well … an understatement. On last night’s Talking Dead, Yvette Nicole Brown – probably the only person who takes more episode notes than I do – reminded us of how Michonne told Sasha after Tyreese’s death that he went a little crazy after he lost people, so she should be careful. At the time Sasha responded that she wasn’t like him; but is she?

On one hand, Sasha isn’t shrinking away from the walkers or the idea of killing people. She is done with defense and is going on a full offensive against the walkers. This does drastically put her at odds with the Tyreese we saw towards the end; but not a Tyreese we saw a few seasons ago – right after he lost someone. After he lost Karen at the prison, Tyreese walked the line between comatose and insanely aggressive – sound familiar. Sasha might be making a point of being the exact opposite of the recent Lovable Tyreese; but in doing so she is following the path of the Beastly Tyreese from Season 4.

Will Sasha ever calm down like Tyreese did or will she die before that happens? Whatever lies ahead of her, with more and more threats amassing outside the walls of Alexandria, sitting in that watch tower might be the best place for her.

The finale is next week and we’ve been promised a “fantastic” spectacle full of blood – and not all of it Walker. Someone is going to die, and with next week’s episode of the Talking Dead having Carol, Darryl and another mystery cast member on, it’s safe to assume it’ll be one of these. Though with Carol threatening Pete next episode and Darryl just starting to hit his stride as a recruiter for Alexandria – also both being HUGE fan favorites – I think it’s much more apt that the 3rd mystery guest will be the one on the chopping block.

So what did you think of this episode? Who do you think will die next episode? Sound off in the comments below and stay tuned for next week’s Closer Look at the Season 5 Finale of The Walking Dead