Oh April Fools Day. It’s the day that the entire Internet basically becomes one huge middle finger. A day of pranks and fun is nice; but when you have ‘news sources’ joining in on the fun, problems arise. I mean let’s face it, how many of you have shouted for joy when hearing fantastic news (ie: Disney making a live-action Gargoyles with Robert Downey Jr and Kevin Feige, a remake of Final Fantasy VII, etc) only to discover it was a lie. How many of you have clicked on a source link or video only to discover that Rick Astley still refuses to ‘Give You Up’?

Though despite all these awful – sometimes hurtful and damaging – pranks, some people and companies decided to put the harmless fun back in April Fools. Nothing to be upset over. No betrayals of trust. Just good old laughs that bring a smile to your face and brightens a day that is otherwise devoid of trust in humanity.

Who cares about self-parking cars or even the fabled flying cars. It’s all about the selfie, and that is exactly what inspired Honda’s latest Not-A-Real Model. Though to be fair, I’m afraid at the number of people pulled over for DWS (Driving While Selfie-ing)

If it’s not joke news stories, then perhaps joke products is your thing. If that’s the case then you really would love what Think Geek did. From Voltron-shaped Cat scratchers to Groot Beer and Rocket Fuel – Yeager Bomb inspired drink + shot combinations – Think Geek’s products were brilliant! Though the greatest had to be Clue – The Game of Thrones Edition.

Considering how random and widespread death is in that series, this was just a glorious joke to be told. Though sadly, the one problem with Think Geek’s April Fool joke products is that they were SO well done that we actually want them to be real now. It is because of this excellence – yet unobtainability – that we must place them at the #5 spot on the list. But hey, if you make these items so, I’ll gladly move you to the #1 Spot.

The past few years, Google Maps has really gotten an A with their April Fools games. Last year we scoured the Earth to become a Pokemon Master; and this year we’re nom’ing our way to leaderboard history with new PacMan Maps. That’s right. Simply load up a location on Google Maps and watch your favorite neighborhood turn into a massive game of PacMan. What’s next, World-Wide Frogger? 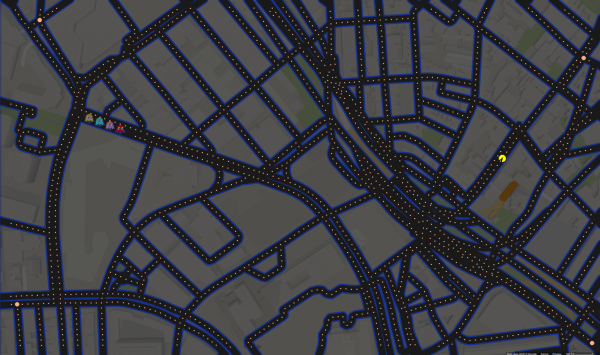 Now depending on whether you play on Mobile Device or Laptop/Desktop will alter the games responsiveness. Whereas the mobile device makes controlling PacMan much easier with swipes, the Laptop/Desktop versions have more workable maps. Then again, whichever way you play those rounded streets are nightmares and make you realize why the original PacMan was only straight lines.

There’s been a lot of talk over the years about the Hadron Collider. What can we learn? Could it prove the existence of Parallel Universes? If something went wrong could it destroy us all? Well it looks like everything went right with this April Fools joke as CNET has discovered proof of the ‘Force’.

“The Force is what gives a particle physicist his powers,” said CERN theorist Ben Kenobi of the University of Mos Eisley, Tatooine. “It’s an energy field created by all living things. It surrounds us; and penetrates us; it binds the galaxy together.”

Between the ‘experts’ chosen in this article to the various over the top references, this release is beautifully written and earns its spot as one of the highlights of 2015. You can find the Full Article here.

One of my favorite April Fools jokes to date was Assassins Creed for Kinect and WiiU. The trailer started so realistic and serious; but even if you believed it for a second, the joke became pretty clear as the video progressed. The same is true of the PlayStation FLOW commercial which allows users to swim in their games in real life.

The idea of pausing a game and running into a pool to continue a swimming level is just hilarious; but even if the joke wasn’t apparent to you at the start, the instant drying mechanisms and shots of people using this in their kitchen made everything hilariously clear.

Even funnier is the name of this new PlayStation department, PWET. In the video it stands for PlayStation Wearable Entertainment Technology; but if you know what Pwet actually means – or Google Translate it – then you know that Pwet is Filipino for ‘ass’. Clever Sony, clever.

With this being the year that Marty McFly traveled to the future in the famous Back to the Future Trilogy as well as the last Fast & Furious film, it makes sense that we’d have some good movie tie-ins. Well, that is exactly what IGN did with their trailer for Fast To The Future. Similarly to Think Geek, the awesomeness of this trailer makes us wish it were real, and thus drops it a spot on our list. Though regardless, this is still an awesome piece of fun footage that reminds us that October 21st this year is THE Back To The Future Day. So mark your calendars because if you miss it, you won’t be able to live it again … or could you?

As long as the Internet gives us April Fools jokes like these, then April Fools might actually become an enjoyable holiday – rather than the midfield of fake stories it has been in recent years.