On our last installment of Ancient Awesomeness, we took a look back at the underrated PS2 game Dirge Of Cerberus: Final Fantasy VII. Whereas I stand by this game’s hidden gems, I think it’s time for us to take a look back at a game that’s not only older; but is also widely accepted as one of the greatest trilogies of its time –the ORIGINAL Spyro The Dragon by Insomniac Games.

Developed during a time when the Nintendo 64 was dominating the field in younger demographics, Spyro The Dragon and its sequel gave the Playstation a 3D Platformer that could appeal to all ages. With revolutionary graphics, playful style and simple yet elegant gameplay, Spyro The Dragon (98-00) remains an important chapter in not only our childhoods, but in modern day gaming’s as well.

You Can Go The Distance – Graphics:

As far as graphics go, Spyro the Dragon was exceptionally impressive for its time and genre. Did it have the advanced cinematics and battles of Final Fantasy VII or the attempts at realism of Tomb Raider? No, but it was never meant to! At the time, most 3D Platformer games couldn’t approach the concept of distance well. In order to get around this, most just created background fog, which covered anything not in the immediate area.

Spyro on the other hand brought a brand new engine to the PlayStation that not only gave full 360 degree camera angles, but could also show great distances into the horizon. Instead of fog, objects in the distance were still rendered normally but became more detailed as you got closer – the way it should be. This allowed Spyro’s environment to seem ever expansive rather than confined, which was good because many levels had Spyro gliding over long distances to reach hidden locations and treasures.

Without Spyro’s graphical fixes to the distance problem, levels such as Tree Tops would have been impossible

It’s hard to talk about the original Spyro trilogy without mentioning the composer Stewart Copeland, former drummer for The Police. It’s said that Copeland devised each musical piece after first playing the level so he could match its tone and beat; and it shows! Listening years later, it’s still possible to identify exactly which level which musical piece comes from.

This is something that remained a constant favorite of all three games; and there’s countless I could choose from as an example; but for this article I’ll choose “Molten Crater” from Spyro: Year Of The Dragon. So take a listen and how the song changes tempo and style at various points throughout, yet still remains the same. This is what happened in each level! You don’t see dedication like this much anymore.

All About The Adventure, Not Difficulty – Gameplay:

When it came to gameplay, Spyro The Dragon wasn’t exactly hard to figure out. The fluidity of the game movements was top notch and even drew inspiration from the widely successful Mario 64. Though with only 4 real moves – charge, flame, jump and fly – some called this a little simplistic. There was no need for button mashing or extensive battle prepping, just common sense. All you had to do was decide what to flame and what to charge. As for everything else, just enjoy the adventure!

This was a world to be enjoyed, not stressed over. Sure there were the occasional Egg Thieves you had to chase down – an almost infuriating task at some points – but the main focus was always about the magical places you traveled and the strange creatures you’d meet. From playful gnorcs to crazy witch doctors, this game had tons of unique enemies for each level; but their most impressive feature was how they all acknowledged Spyro. 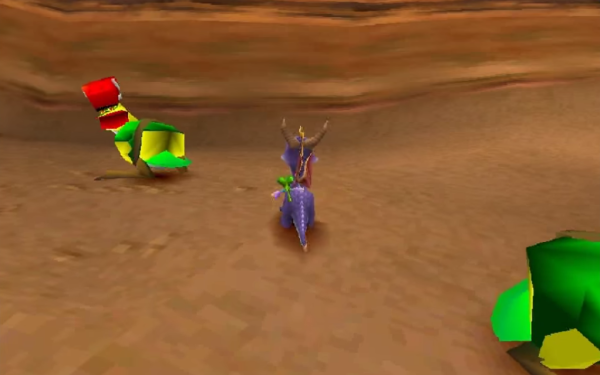 Whenever Spyro is near, these Foot Soldiers will run away, hide under tents, and cower. Unless you idle, then their pants come down and the mooning begins…

Many 3D Platformers at the time had enemies that were stuck to a simple motion paths or had only one set action. Spyro’s game enemies always turned toward Spyro once he entered the scene. They saw him, charged him, cowered in front of him, and sometimes even taunted him if he just stood there idling. This wasn’t a game to beat, but rather a game to interact with – and none did that more than it’s outstanding sequel.

Now a days, it seems like most game sequels are nothing more than some slight game improvements and some new locations – ie: Call of Duty, Mario Party, etc. Though this wasn’t the case with arguably the best Spyro game ever made – Spyro 2: Ripto’s Rage. So what made it so good?

“With Spyro 2, we learned what making sequels was all about. Consumers are not happy with just a bunch of additional levels.” – Ted Price, President and CEO of Insomniac Games

When Insomniac started making this sequel, they knew it had to still have the Spyro feel; but also completely change the game was played. As the logical expansion, Spyro could now Swim and even had power-ups that helped to increase the range of the initial game mechanics. Although the greatest aspect of Ripto’s Rage was how this time around you actually got involved in the worlds and their troubles – in other words: story, story and more story.

In the original Spyro The Dragon, you basically traveled from world to world knowing that you had to free dragons and take out Gnasty Gnorc’s minions. In Ripto’s Rage, each level had an intro and outro cut-scenes that showed you each world’s problem to be fixed. Whether it was possessed tiki’s, a rampaging yeti or a bunch of loveable cavemen besieged by hungry dinosaurs, you knew exactly why you were there.

Similarly to this, you could actually interact with each world’s inhabitants. The original game only let you talk momentarily with the ‘rescued dragons’; but this world let you feel the culture of each world. With all these added story elements came the potential for humor – and a lot of it. From break dancing skeletons to slapstick humor, this game added just as many laughs as it did stories. Though there was one more major improvement upon the original Spyro The Dragon in this game – mini-games!

With the addition of mini-games, the Spyro series was able to branch out while still adding depth to its already expanding world. Whether it was feeding a pet leopard, finding possessed statues, freeing baby turtles or playing hockey, the mini-games were just another way Ripto’s Rage opened up the game world and offered players the difficulty that was missing from the first game. Different mini-game had different ranks of difficulty; and while none were impossible, some did require a good amount of route planning – especially when there was a time limit imposed as well.

Stop the Dinosaurs before they eat the cave people, but only AFTER they’ve hatched. With multiple eggs and massive blind-spots, it’s easy to see why this Skeletos challenge was one of the toughest in the game

The Fate Of All Trilogies – Year Of The Dragon:

With all the success of Ripto’s Rage, work quickly began on a 3rd entry into the series titled Spyro: Year of the Dragon. Year of the Dragon brought even more mini-games; but this time put them in separate pocket worlds within each level – rather than take place in the level itself. Additionally, the game even brought in 4 additional playable characters, each with their own unique set of controls and style of play. This wider range of playable characters allowed the minigames to take on play-styles similar to other iconic videogames, including Goldeneye, Crash Bandicoot, Ready To Rumble and even Tony Hawk Pro-Skater.

“Instead of burdening Spyro with a bunch of extra moves, we wanted players to experience new control schemes and introduce new faces” – Ted Price, President and CEO of Insomniac Games

Sadly, despite Year of the Dragon having some incredible moments, it still was a decline from the previous title. As I already mentioned, the mini-games were in their own little pocket worlds, which – while certainly showing them to be ‘side-quests’ – made the game feel disconnected at times. Additionally, this game removed the funny level cut-scenes that were so popular in Ripto’s Rage. Though one of the most annoying ‘new features’ of this game was the ‘Auto Challenge Tuning’, which made the game easier the more times you died.

Whereas this could be a nice game factor for some other games, Spyro’s difficulty didn’t even remotely call for this – and even if it did, it never asked if you wanted to make it easier. It just simply assumed you couldn’t master this and held your hand all the way home. In retrospect, Year of the Dragon was a great game and some levels – ie: Fireworks Factory – will remain some of my favorite; but as a whole the game showed signs that Insomniac was running out of ideas when it came to this little purple dragon. 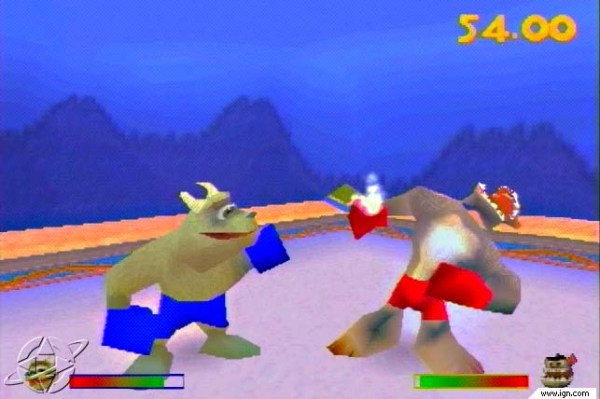 Again, this article is about the original Spyro The Dragon trilogy by Insomniac Games. What happened to it in the years following were either poor attempts by Universal to take over Insomniac’s creation or videogames that had no right using the name Spyro. You see, despite Insomniac Games creating Spyro The Dragon, they didn’t own the title – Universal did, while working as a middleman with Sony. Tired of all this, Insomniac eventually went on to work with Sony directly and began work on what in my opinion is the true successor of the Spyro series, Ratchet & Clank – but that’s an article for another time.

Meanwhile, Universal didn’t to let this property go and decided to hire multiple outside studios to try their hand at making a Spyro game. From the failed attempt to confine Spyro to the Game Boy Advance world to the nightmarish Spyro: Enter The Dragonfly for PS2 – quite possibly one of the worst games ever made. This cycle continued for a while as Universal kept trying to find a new studio and rehashing old played out plotlines and villains. At one point, Spyro even became an RPG … don’t ask.

Despite all this – and a reboot that painted the usually dragon with attitude as innocent and incompetent – Universal (now Vivendi) kept trying to make it work until finally Activision got their hands on it and tried to make an adult Spyro game. In the end, that idea got scrapped and he became a part of the VERY kid-centric Skylanders toys–to–games series. Though with Spyro not even being a main character in the series, calling its first game Skylanders: Spyro’s Adventure is like calling Super Smash Bros a Pokemon game.

I might not understand the appeal of Skylanders or why the name Spyro is still being used today despite everything about the character having been rebooted twice in 5 years; but one thing is for certain: the original Spyro The Dragon trilogy is one of those greats you always have to come back to every few years. As a child or as an adult, the games have something for everyone; and without it, Playstation might not have found that widely appealing game for all ages – and that is why it holds a place in the archives of Ancient Awesomeness!

*Special thanks to The Game Direct‘s Youtube Videos and Webcitation for quotes.